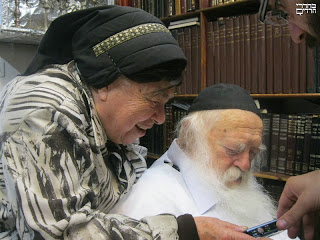 Hershl, I have a niggling suspicion that all was not well between the Steipler and R' Chaim but I have only scant evidence and I wonder if you or your readers could assist either way.

My hunch rests on the following.

1) I visisted the Steipler in person and found him to be an angry old man paranoid about people reselling his sforim so I doubt he had too close relations with anyone.

2) I have never seen a photo of the 2 together.

3) A story I heard from Dayan Dunner from London that when the Steipler was ill and they were saying Tehilim for him in Lederman R' Chaim was in his flat studying. (Of course, he had his own gloss for the story supported by what R' Chaim himself may have said.)

I repeat that it is no more than a hunch and even all 3 of the above need not point to anything. Nonetheless I'd be interested to hear what others know about it.

Enda Tsadik you are so wrong it scares me your #1 the steipler was certainly not just " an angry old man paranoid about people reselling his sforim" I don't even know what you gain by saying that, he had nothing against Chabad? #2 I have seen several pictures of them together.

This site is great but when you have stupid people writing simple nonsense in the comments it kills the whole taste of the material.

There is no need to elaborate on that relationship. It is so well known that even Paysach Krohn has alluded to it in a story, in a bekovodike way of course.

Yehupitz, can you perhaps elaborate? If you don't wish to do so in public please write to me at endetsadik at gmail.

Anon, the success of this site is precisely because it tolerates and indeed encourages intelligent and mature discussion rather than resort to the nauseating sentimentality and hagiography that make up 90% of the frum press and websites.