I used to think that the Milchig restaurants and dairy producers were making a mockery of the 9 days... 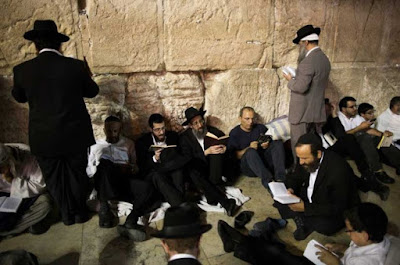 And let's not forget the newspapers, magazines and websites that enable them.... With their fancy ads and recipes. Cheese dripping and melting ice cream. But then I started paying attention to the Artscroll ads ------------- The ads that make you think it's Chanukah in August. I think it's worse. A lot worse. Because at least with an ice cream or fish ad I know that it's about the food. And I know that they're trying to get their market share. With the Artscroll ad I am lead to believe that they're helping me mourn. REALLY mourn. Mourn interlinearly, transliteratedly, and any other which way. From Soloveitchik to Kanievsky, (Sorry, they don't do Soloveitchik) and anything in between. But it's not. Take your .75c kinos, and maybe buy a מדרש איכה with a פירוש. Anything else is just wrong. You can even learn הניזקין with the English Artscoll, but don't do anymore than that. If you do you're just a pawn in their evil chess game.

Wrong? Evil? Can you explain yourself?!!

Until I bought the English Eicha, I had no clue what I was saying. Just saying.

Artscroll is a business who happens to print religious literature, and using the contents of that literature to enrich themselves.

I don't understand! Terrible! Why do they publish this stuff?! It belongs in a museum! Since moshiach is here already, why say kinnos???

Of course, if you do say kinnos, then just yap for 2 hours without understanding too much. But the moderinishe, Litvishe Artscrol crowd is permitted to actually understand what they're saying.

I found in a shul in the mountains one of the old hertz chumashim. it made me think - You look back and you see how Artscroll filled an incredible gap - quality English religious literature. my main issue with artscroll is that , like everything else frum, the orthodox community is very prone to being abused by monopolies.

When I see the contortionist getting their knickers in a twist to 'explain' why the nine days just happens to be auspicious for siyumim, I get just as weirded out

Only Tanya in English is allowed.

Hirshel, what on earth is this nonsense? People in the USA and Israel nowadays have no idea what Golus means. They have no idea what Tisha B'Av means, or what the Kinos mean. So people give shiuirm and publish books to explain it, and you have a problem?! Do you think this post is mekareiv the Geula because it explains that we shouldn't think about Golus too much?

Hirshel said it's wrong so it's wrong. And the same is with the Gemoro. Learn with Rashi and maybe Tosfos. Any more is just wrong.

Hirshel, you are sounding unhinged.