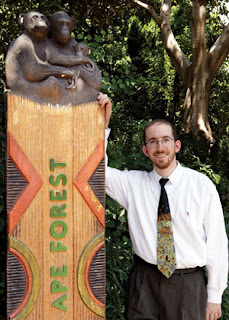 Hirshel: Let me begin by saying that I like Rabbi Slifkin. I have a few of his books and I think he's a well meaning fellow; I am especially drawn to defend him and his right to be a thinking man.

That said, I listened to his interview with Dennis Prager in August of '06 and was pretty disappointed . He was asked among other things by the interviewer - DP - a believer, if he believed in creation the way it's presented in the Bible, if he believed in the Exodus, and if he believed in Evolution. I cringed at his floundering under question by Christian fundamentalists and others – he seemed completely out of his depth, and in fact I got the impression that Dennis Prager himself might be more competent in this area than Rabbi Slifkin. It also reinforced something that I began to see in his last two books: he is increasingly intellectually dishonest (albeit perhaps well-meant) and takes his opponents criticisms (perhaps somewhat understandably) too personally. His oversimplifications, and his propensity for only telling one side of the story (his view) is, simply put, poor scholarship. And that's the point – he's not a scholar.

It seems to me that Rabbi Slifkin is another layman that – like many more modern thinkers – feels the need to deal with their conflicts, and find a way to navigate the terrain of Torah & Chazal vs. Science & secular thinking while splitting the difference. That's fine, and I have no problem with it on personal level. Every individual is entitled to find themselves and think things out; it's a noble and important process that is essential to the human spirit. But when someone writes a book or goes on a lecture tour, etc – i.e. he goes out in public to represent Yiddishkeit – that's where things change. It is irresponsible for someone to make statements that aren't carefully worked out and remain quite ambiguous; moreover, it is irresponsible to express an opinion as a fact. A scholar cannot put words in the mouths of others, even if he infers that his understanding is what that other was alluding to. All of this is especially problematic when a rabbi gives credence to questions and then comes back with answers are weak and incomplete, leaving the reader/listener in the unenviable position of problems that are stronger than the answers (and answers that address one problem while creating another).

I wish him well, but, as much as I wanted to be a member of the Slifkin support club, I just don't think I can do so anymore. We hardly knew ya, Natan.
Posted by Hirshel Tzig - הירשל ציג at 3:06 PM

I had to add SOMETHING!

I agree with the first part of what he said. I always felt that just because he loves animals and has informally studied animals his whole life does not make him an authority on science and theology.

That being said, of the opinions that I have heard of his that are controversial, I have heard in the past from rabbonim and other authors. Maybe he has said other things that he made up, but I have only heard from him things that I heard also from others. And again, his issues do not bother me so I am willing to accept his explanations as possible explanations and I understand why others disagree and prefer other answers. Whose opinions and explanations are correct? to me it does not matter. I am happy to say eilu v'eilu divrei elokim chaim. If his answers satisfy some people great. If other answers satisfy other people great.

Being that he has studied the issues, albeit informally, I have no problem with him travelling around and lecturing. Again, I have never heard him say something that I had not already heard from people greater than him (that does not mean he did not say things on his own, but I never heard it), so his lecturing on those ideas do not bother me.

He sounds like a guy straight out of Yeshivah, which makes him sound way out his league. I don't mean to put down Yeshiva Guys, but speaking about such subjects does make them sound like they're in over their head. Good post Zezmir.

ive never admired the man
just the fight in the man

Some of his books are a special piece of work, and he does have a specialty (zoology). I have his Mystical Creatures, and I heard him lecture and did a tour with him at the zoo. And it was great, identifying attributes of creatures versus descriptions in the Gemora. Have a signed copy of the book.

But, I recently bought his Challenge of Creation and was also severely disappointed. In this space, expanding into genetics, evolution theory, physics, quantum mechanics, astrophysics, he's a lightweight. Try to put that together with solid Torah interpretation and it's just weak.

He's trying to raise a good subject to be discussed, for Jews who have such depths of Torah for every parsha to deal with Berayshis as pshat is just nuts. In the context of chassidus, kabbalah, and midrash, it's a complete joke.

But that said, Rabbi Slifkin may have reached the level of doing it a disservice.

His very cold relation to mekubolim is a bad sign. It means that he lacks this knowledge, and therefore he is over speculative when attacking them. He internally sides with the Rambam, claiming that sheydim are just merely fariy tales. Something bothers me with that, even thought I consider totally evil and weird the attack on him form fanatics who goyrem dem Golus with their chumroys, thinkins this is what Chasidus is all about.

I too agee with Akiva. I like his books on zoology, however after listening to this interview I was dissapointed like Zezmir.

I've taken his zoo tour, and was somewhat underwhelmed. There was nothing objectionable, but not that much real content. We just stopped in front of the animals and he recited that animal's line in Perek Shira, or a pasuk where it's mentioned in Tanach. After a while, that gets old. I can read Perek Shira for myself, and I can search Tanach with various animal names; I had been expecting more Torah and more zoology.

It was actually a bit like reading one of those compilation seforim that people like to write nowadays, which are just lists of what other people said about a subject.

Natan Slifkin here. I have to tell you, I myself hated the Prager interview. I was totally unprepared for the rapid pace of the questions and the minimal time that I was given for responses. That kind of topic is way too complex for me to be able to give two-second sound bites off-the-cuff. I did not present my approach accurately and I regret the interview immensely.

(Regarding the zoo tour - sorry, Milhouse, if you were disappointed. I can give you a refund. But it's certainly very, very far from accurate to say that all I do is recite a passuk about the animal or the place in Perek Shirah where it is mentioned.)

Something that frustrates me is when people say "But he's not an authority in science etc." I never present my approach on the strength of personal authority, but rather on the strength of the arguments themselves. Yet people seem to be reluctant to actually cite anything from my books to back up their charges.

Funny and true story - there was one person who kept on insisting that I speak disrespectfully about Chazal. When he was pushed to actually cite an example, he dodged and dodged, and finally came up with the fact that I accept evolution!

I'm glad to listen to criticisms of my work and correct it where appropriate - but some people are clearly trying to dress up their religious objections to modern science as being something else.

>>ive never admired the man
just the fight in the man

Amshinov, I think you encapsulated the MO fascination with Slifkin very aptly.

I think the poster does raise some excellent points regarding Natan. I love the guy, know him from EY, and read many of his books, but I lost a lot of respect for him once he put up a fight and represented things in so one-sided a manner.

I still don't think it was a good idea for him to fight back. He got too big, too young.

Instead of continuing the personal criticisms of Rav Slifkin, wouldn't it be more productive to respond to the points he has raised?

FKM did that, Slifkin does not care.

There is a new thread - all new comments belong there):

My problem with this discussion is that Slifkin is a cause celebre among the likes of Failed Messiah and others who are basically not interested in the issues but are just using the whole issue to bash the Torah world (and I mean EVERYONE from Lakewood to Satmar). The work is not of very high caliber, nor is it of much interest EXCEPT that the cherem was an unwarranted over-reaction that played into the hands of the so-called "orthoskeptics" (who are nothing but "grube yingelach" and plain old losers). Anyone who wants to get the books can get them; there are more important issues in the frum world today and discussing this will only give more power to the rabble-rousers.

. . . especially because all the yelling magnifies the character of Slifkin's books and scholarship into something that it isn't: important.