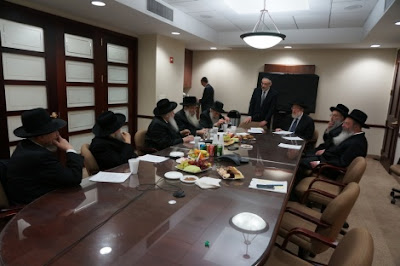 You know who you are. I'm truly flattered that you value and request my opinion.

Other reasons may include

1) not inciting the wrath of their many supporters
2) Not wanting to give their more attention than they already are getting
3) I'm no boki in הלכות שררה לנשים
4) I'm just a blogger.

I'm a simple guy with mostly old-fashioned values. Not that I'm terribly afraid of controversy, it's just that they get petty and call you names. Hater, chauvinist, and מי יודע מה. Somehow you become part of this vast conspiracy to keep women down and in the kitchen. Somehow what they want is so simple and so muttar; just like Shabbos clocks and Kosher lamps. No less. The funny thing is that it's mostly men calling for all this change, at least the ones I see. The women go about their business and do what they wanna do. The men go on FB and make a stink. I suppose that wins them points with the ladies? So I should stand here and call out Avi Weiss or the guys at YCT? What for? So that no Orthodox shul takes a YCT or HIR grad as Rabbi? Besides. it's not just about YCT or HIR anymore. The idea has spread to many more similar circles, especially in Israel, and they could care less what a few old men in a boardroom in NY think. It has joined similar movements that have made much headway in recent years, much to every frum Jew's chagrin, and sometimes the only response is to keep silent. That's all I have to say.
Posted by Hirshel Tzig - הירשל ציג at 1:11 PM


can someone explain the difference between 0, 00, and MO ?

MO is very insecure movement today - always looking up to the UO to make sure they aren't ch"v looking down at them and simultaniously bashing them for not knowing slifkin-esque quasi-science as a way to try to feel better about themselves, while at the same time looking down to the secular to make sure the freia accept them as "normal" guys who are just as worldly as them.
OO seems much more secure in who they are and don't really care what the UO say about them. They just keep making stuff up and don't even care if they're amharatzim or not or if anyone thinks they're not that religious.
Religiously speaking, I'd say OO is quite a bit to the left of what Conservative Judaism was when I was young - 35 years ago or so. CJ as it was then doesn't really exist anymore, and most CJs are just secular Jews who aren't distinguishable from RJs.

I get the hint, what's all this with me ?


The chacmi chelem by ostracizing the OO only, they by omition authenticated the MO with their *שבע תועבות witch is worse because now it's not any more לבם נוקפו on their way to becoming ככל הגוים with the approval of the rabbinic court of מדשתקי רבנים שמע מינה דניחה ליה so they can go on with their goal of becoming the celebrated "evangelical-jew" a label the MO strive for to become kind of the Ost- juden of our times.

hieshel?: " Somehow you become part of this vast conspiracy to keep women down "

sounds like a Republican ploy by keeping woman down you keeping Hillary out.

Not bad for a Billy Goat.

Why is there always food at these meetings? I'm sure when the gra put the chasidim in cherem he wasn't sitting in front of a plate of Kokosh cake

o/t The last surviving child of the קדושת ציון of באבוב was nifteres today. Mrs Malka Jakober of London ע"ה

"he wasn't sitting in front of a plate of Kokosh cake"

and the complaints against the cherem, weren't coming in through Internet crowd either.

micuel shen....
what's your problem with R Ezriel Hildesheimer? He was one of the few erliche leaders in Germany when the Reform was biting shark size chunks out of orthodoxy. He was totally uncompromising, just as was R SR Hirsch. You should rinse your mouth with ammonia before you even utter their holy names.

"You should rinse your mouth with ammonia before you even utter their holy names."

agreed. my analogy was meant as a symbol of תורה ומדע that didn't work than in europe or america, and going back to that failed model won't work today either, apeasment ופשרות ביהדות doesn't work. not c"v any פגיעה in reb EH personally.

a: "He was totally uncompromising"

So was RYT I haven't seen you recommend to any haters and degraders your amonia treatment! what's behind it ?

"He was totally uncompromising, just as was R SR Hirsch. "

"There are those who would claim both Samson Raphael Hirsch and Hildesheimer as indirect philosophical founders of Modern Orthodox Judaism; in fact, of the two, Hildesheimer is more likely classifiable as such.

It is true that Hirsch's Torah im Derech Eretz — a philosophy of Orthodox Judaism which formalises a relationship between traditionally observant Judaism and the modern world — bears a superficial resemblance to today's Modern Orthodox Judaism. However, a deeper investigation shows Hirsch's philosophy (Judaism as the sole source of truth by which to judge modernity), at odds with the Modern Orthodox philosophy (two co-existing ideas - Judaism and modernity). Hirsch also separated himself and his community from the Conservative and Reform Jewish community and was, at best, unsympathetic to Zionist efforts!. By contrast Hildesheimer..."

"why is there always food at these meetings?"

anon: "bfore you even utter his holy names."

I doubt that he would be accepted today as a student even in lakewood BMG or any frum school.

biography highlights:
Hildesheimer, was a talmud of the infamous Isaac Bernays and of, Hasharat Zvi school. than went to the University of Würzburg, got his diploma at the public Königliches Dom-Gymnasium, and entered the University of Berlin; he became a disciple of the dominant Hegelian school. He studied Semitic languages and mathematics, he went to Halle upon Saale where he earned his Ph.D. from the  University of Halle-Wittenberg  in 1844 under Wilhelm Gesenius  and  Emil Rödiger (Ueber die rechte Art der Bibelinterpretation). He then returned to Halberstadt, where he married Henrietta Hirsch, whose dowry made them financially independent. His first notable act there was to found a parochial school, where correct German was used, and modern principles of pedagogy were adopted in teaching secular, as well as Jewish, subjects. Hildesheimer initially introduced secular studies in the elementary school; the older students received a secular education as well, but with a focus on mathematics and other subjects that would enhance their understanding of gemara. !¿