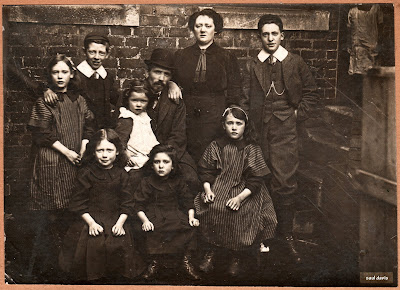 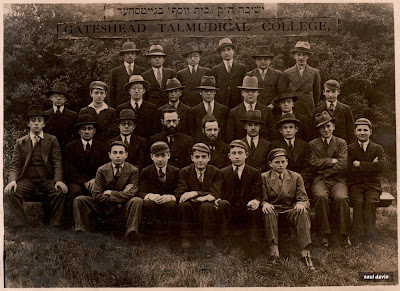 So I was reading the Artscroll "Rav Dessler" book over the last few days. Some good reading there and some typical whitewashing as well. As is to be expected. Things they don't want to discuss they just figure that you either will figure out elsewhere, don't need to know, or are not smart enough to realize that they just pulled fast one on you. I'm talking about his connection to the Alter Rebbe and Toras Chabad. The description of the "Talmud Torah" in Kelm with all of its rules and regulations and expectations is fascinating, despite it somewhat resembling a Swiss finishing school with all its rules. Seems like they got a little overzealous with the whole mussar and tikun hamidos/shleimus haOdom thing. So anyway, I searched for some Gateshead pictures and this is part of what I found. Rav Dessler - of course - founded the Gateshead Kolel - check that, he was the founding Rosh Kolel - during WW2 and headed it until he left for Bnei Beraq. This after some years in London as Rav in several shuls, where he had gone to seek his fortune, a fortune he needed to pay back creditors of both himself and his father Reb Reuven Dov.
Posted by Hirshel Tzig - הירשל ציג at 12:24 PM

Tzig,
This off topic ,still, maybe you would like to respond here or in another thread.
Anyway, what is your opinion of R'Yerusalevsky issuing a ban against Strauss Dairy in Israel.They are probably the biggest manufacturers of milk products, salads and ice cream in Israel.They also own Elite which is one of the biggest chocolate and many other food items in Israel.Yerusalevsky banned them because they dropped the hechsher of R'Landau and took another mehadrin hechsher.
The problems I have with this ban:a)Chabad have had problems with being "banned" throughout their history, including the major fight over elections in Israel in '89, where there were attempts to "ban" them.Using this weapon against others sounds hypocritical.
b)Allowing and promoting bans can boomerang,now any group attempting to "ban" a Lubavitch group has the legitimacy so to speak of one of the highest ranking Chabad rabbis in Israel.

Please let's not use expedient excuses that the kashrus of the new hechsher is not on the same level.A)Chabad has not banned any other hechsher including Rabbanut which has to have lower standards because it's more inclusive.Even OK Labs a Lubavitch hechsher gives supervision to cholov stam,with the understanding that if you are makpid on cholov stam do not use this item.B)Please no excuses of war against chasidim.The new rav hamachshir,Rabbi Rubin is a Slonimer chosid, with shmoino begudim.
Bekitser, inmho this ban is not oisgehalten al pi yoisher and not al pi seychel.Sounds like partisan sour grapes

Faish,
Situation is that Rabbi Rubin jumped on a hashgacha that was rebuked for halachic reasons by another legitimate Rov, you don"t jump to give a hashgocha, its immoral, its a Chilul Hashem, and stop with your dramatic Chasidic/Misnagdic analogy.its relevant at this discussion, Reb Moshe Landau is the cream of the crop of chabad rabonim, if chabad will not stand up for him then why should others.

Hirshel,
did you read the Hebrew biography of Rav Dessler? Hamechanech Hagodel? is Artscroll a translation of the Hebrew or the opposite?

I think the Hebrew is based on the English, which is why I didn't buy it.

The Dessler side of the family ignore his chasidic affiliation in his latter years,but thank G-d for the other part of the family that saved all the details and put it in print leolmie ad,
I heard in Monsey from a old Litvisher Yidel that when Rav Dessler visited Bais Midrash Elyon, he gave shiurim in Tanya Shaar Hayichud, and started out by saying Bochurim, Haltz Kup its a foreign subject for you, so listen careful

Could you give a list of topics that they whitewashed?

Anonymoous 7:20,
Listen you don't know what you are talking about.You don't know the details.Check them out on the Israeli chareidi sites
Seems to me that in any debate/fight you automatically take the Chabad side,even when wrong,even when silly.See,I did not even take a side,I just said that Yerusalevsky has opened up Chabad to bans,because he is requesting a ban on others.Get it??
That means he is not using sechel!
Bans tend to come back and bite in places that hurt!

Mark
Are u blind, Hirshel wrote exactly that a big part of his history is omitted.If the bigest Baal Hegyon in the Misnagdic world decides to change course to chassic , I believe it a major point in his biography that should be well written out. It has noting to do with your enjoying the book.

in michtov m'elyahu you can find quotes from R Nachman, at least as many as those from The alter rebbe.
so it seems he noshed from all over.

Faish,
It seems like Gerer chasidim are also honoring the Bnai Beraker Rov Hasoras Hashgocha,they are taking all Strauss items off the shelves of a supermarket chain owned by a Gerer Family, I would like to see what Belzer Chassidim will do now,since they have a reputation for back stabbing Rav Landau and Khal Hachasidim despite they were thrown politically under the bus by Degel etc.. lets wait and see if they will not run with their failed hasgacha to offer it for Strauss even for free

Few people know that Kelm also taught secular studies.
With all due respect to Rav Dessler, there were many who thought his teachings to be less than important.
Most of the senior mashgichim in Israel were opposed to his teachings as according to them it was off the main Mussar track. Can anyone here comment on that.
I heard a story that may not be true (on the other hand it may be accurate )but expresses a certain strain of thought in the general orthodox comunity.
The "Rav" was visiting a wealthy Orthodox donor on the Upper West Side, and noted a copy of Michtav Me-Eliyahu in his book case, and the rav asked why do you have this in your library ?
Correct me if I am wrong but was it not his talmid Arye Carmel through his tapes and Englsh translation who popularized Rav Dessler as a baal machshova.
I read parts of his works, and found itcertainly worthwhile , but is it real machshova ? and is it classical Mussar reyd ?
I am curious what others have to say .Obviously my comments have nothing to do with Rav Dessler the rav and tzadik, just how important his published works are and how others viewed them bechayav.

Anonymous.
Rav Dessler wasa real Litvack and did not say "haltz kup" (maybe thats how rabbi Aaron Teitelbaum of KJ says it on his telephone shiurim), but Rav Dessler would have said halt kop.
Its like saying that the Divre Chaim said a guten sabbes !

Anon,
get your facts better before you write,
Reb Yisroes Son was a Maskil
I see that Birthday celebrations bothers you deeply, is it the Chukas Hagoi aspect? I think its more Chukas Hagoi to read and write on Internet,

Rav Desslers "connection" to Chabad is that he studied and appreciated Tanya.What are the "dark hints" that the Lubavitcher posters here are trying to bring out?
Anon:10:20,
I think you are better off not getting into what happened to some descendants of rabbonim, cuz the matzav by you is no better and is also heavily censored.

Kalmen,
Their is nobody telling you about black helicopters and Rav dessler, it is just that he learned for the last years of his life chassidus chabad Tanya, Likutie torah etc.. and that he davened in Homil in the Chabad shtibel,wanted to create a Yeshiva that would learn a combo of Chabad and Litvish derech Halimud,and was very friendly with Reb Itche masmid and said that having reb Itche by me in Gateshead was the best days of mu life, nobody wants to tell you that he drove a Mitva Tank

Anybody who has learned different sifrei machshovo sees that Rav Dessler had various influences, primarily derech hamussar but also ideas from Tanya etc.What's the big deal? Do you think That Tanya is so different from derech Hamahral?In fact just like almost all Jewish thinkers the Baal Hatanya was influenced by different schools of thought.Yes, there was Torah,machshovo,kabbolo before chasidim rolled around.

Anonymous A well spoken Litvack (Is there another kind)speaking to a large crowd or a small crowd or to one person says "halt Kop". If the same Litvack did notlike what a talmid said he would say schvayg if h edid not like what his talmidim said he would also say schvayg.

Kalman
Fed by whom? is the SIL Rav Geldzheler good enough? he writes it all in the foreword of his seforim, everything I wrote was printed

When you say Kelm had secular studies, you are refering to the mechinah? The yeshiva, which never had more than thirty or fourty, did not have secular knolwedge. Although Kelm appreciated the 7chucmus, educated their women and even allowed the Alter's daughter (Nechumh Libah?) to give shmuezin behind the mechitzah.

I must add, that there are many mamorim explaining the philosephy of Kelm and I am sure that the Baal HaBlog understands it before he made choizek. Also, although Kelm on the surface preached conformity, Kelm was never replicated, many of the Kelmers devoloped their own mehalach. (Telsh, and Slabodko all originated in Kelm).

Anon8:30
Rav Dessler was in Gateshead after R'Itche Mamid was back in Russia and died al kidush Hashem.
They spent time in London

Not Brisk
Did you hear it personal from Balie Mussar? or you saw some article printed aganst Rav Dessler? please clarify if its not rumors,
I heard that Reb Yecheskel Levinstien said after he took over his position in Ponovich,that it will take years to rip out the Chassidus that Rav Dessler planted.

Kalman
I am not about to argue with a arrogant fool that Chabad and Maharal is similar, you can stay a fool all your life.

Anon:7:36
Hey, you sound like a real "nice" guy.A little arrogant and not a small ignoramus, but besides that, you are a great fellow

Kalman:
Notwithstanding anon's arrogance he happens to be right. Chabad is, like most Chassidus, based on the Toras Harizal. The Maharal's machshava is very very different. The Kabala portions really go back to Sefer Yetzira and the like which are a completely different approach. There are some chassidus, mostly polish (ger), who got very into maharal style machshava.

I never really looked into Rav desslers seforim, but I always thought he was along the lines of Rav yeruchem, rav wolbe, which is the teefe derher mussar, which at some point begins to sound like machshava.

Interestingly, rav volbe, in his later years, hooked up with rav hutner and his shmuezzen began to take on a distinctly mhahral machshava like style. Many of his regulars did not like the combination.

Kelm had a "Gymnasium" where they learned secular subjects.

R Dessler zt'l had a Tanya bei his shtender.

Interesting post and comments.
Have a great Shabbos Kodesh.