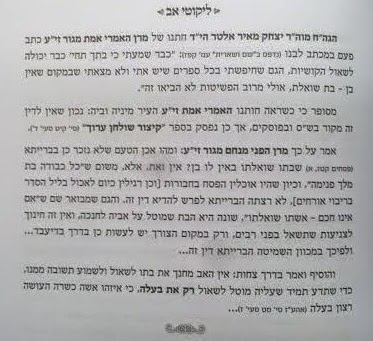 the truth is the Pnie Menachem was not the real torchbearer of gerer chauvinism, but he still liked a sharfe vort when he saw one

anon
she did alot of stuff that other Rebishe kinder would not have done,
she used to come in to her fathers Tisch to pick up his becher for kidush too.
Chasidim didn't like it but she was still doing it,


Merriam-Webster.com.
chau•vin•ism
1) an attitude that the members of your own sex are always better than those of the opposite sex = GER

Levertover,
I am well aware of ME's daughter picked up her father's becher, as mentioned in DCV; but the article topic was mah nishtana. Furthermore, there it says ki yishalcha bincha...