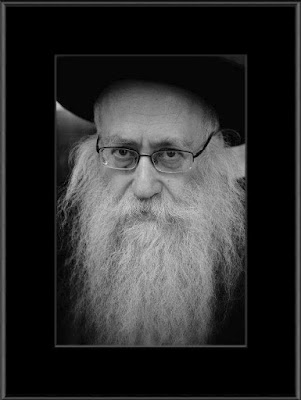 There isn't much someone like me can say about Reb Meilech. Yes, I spent some time at the Yeshiva in Morristown and attended his farbrengens, but there was so much that the average bochur / yungerman didn't "get" about Reb Meilech. How BEYOND any of us he was.

Despite being the kindest, most gentle man you'll ever meet I was afraid to approach him, such was the awe one (me) felt for him. But even that average guy can know that Reb Meilech cannot be replaced. That he was a חד בדרא ממש. His vast knowledge of ALL facets of Torah. ALL means ALL, not just Yeshivishe mesechtos or popular topics in Halochoh or Aggadah. ALL means ALL of Torah. Nigleh, Chassidus, Kabbolloh. And most of all his Chassidishe bittul.  He was in his own mind a simple Jew, a chossid of the Rebbe. Nobody special. He did all he could to avoid the spotlight. You had to twist his arm and beg him to come farbreng in places like BP or Monsey. He simply didn't believe that anybody wants to hear what HE has to say. He just sat in his office and learned. And during seder chassidus he sat in the beis medrish and learned. That's all. Thankfully he did agree to work on חסידות מבוארת these last few years, and they say that there is much Chiddushei Torah from him, written anonymously or under pseudonyms in various קובצים.

[You might say that Lubavitch is at a disadvantage because of people like him... i.e. that the velt doesn't realize and recognize what Chassidus is.]  You won't see obituaries on YWN and VIN because וואס פארשטייען זיי אין א מיילעך צוויבל? But here and there - especially during farbrengens in Yeshivah "נאך משקה", and if the situation called for it - he'd reveal a little bit. Like repeating קצות word for word by heart. They just don't make yidden like that anymore. Here was a bochurel from a Galitzyaner home who "by mistake" fell into Lubavitcher Yeshiva in Lod, because they lived nearby and his father, a Bobover Chossid, wanted a "Chassidishe Yeshiva." but he became one of the greatest. If that's not a lesson in Hashgochoh Protis what is? I'm rambling. Sorry. חבל, חבל מאד, על דאבדין.

Below we see Reb Meilech (during his sheva brochos, perhaps?) with his wife's zeide, his shver's father, the venerable Karliner Chossid Reb Avrohom HaCohen Blesofsky o"h. 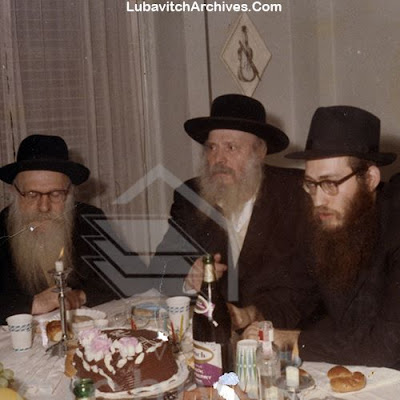 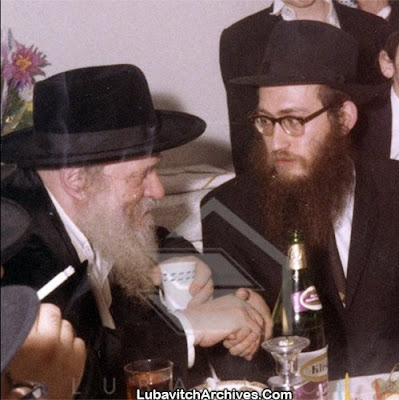 I don't think your'e right about his father being a Bobover to the best of my knowledge the Zwiebel's were Belzer Chasidim.

He was the best we had. A person who was just Wow. I remember bringing Reb Menashe Klein ZAL to Morristown to give a shiur and in middle of the Shiur Kloli Reb Melech ZAL commented in his low tone in Yidish " i think your zeide in Bais Shearim writes the opposite in Chalek Bais Siman......... He actually knew everything and was blessed with a Photo Memory....

"There isn't much someone like me can say about Reb Meilech."

May I add that it seems he actually had Payos! that's a mesiras nefesh for a Lubavitcher "mashpia" I think.

"Yes, I spent some time at the Yeshiva in Morristown and attended his farbrengens"

he was in the FFB yeshiva

there are 2 yeshivos there

I heard from a Yid today a nice story

The chabad yeshiva was in Newark NJ before it moved to Morristown.

When it was in Newark the city was already in decay and there were a few shuls around but only one had a Mivkah it was shul run by a Rabbi Oscar Klein. It was a crude mivkah and it was of course in the basement. The Shkutzim would love to brake to windows to the basement and in turn the place in the Winter would be very very cold already being a basement.

The person told me went there one shabbas morning and the windows were broken and the mivkah was to say the least frezzing as was the floors and the entire basement. He watch as Reb Meilich Zal took his clothes off walked down the steps into the water and out without even flinching as if it was 80 degree water. He got dressed and left. Most of the bochurim could not use it and just walked reb Meilech back to the Yeshiva. He was a regular to daven 5 hours shabbas Schachris without any Blitos.

"there are 2 yeshivos there"

oh okay, what do I know I eat only at Gotlibe's.

"into the water and out without even flinching"

Cognitive Vs. the Emotional

I heard about the frozen mikvah many times from my father, who learnt by Reb Meilach Newark.
In a side note:
A friend of mine was in mo-town a few years ago, and one day, the Mikvah was steaming hot and no one could go in.
Reb Meilach walked down the steps - without flinching, and toiveled. When he came up he said: מען זאל נישט אריינגיין, and the proceeded to get dressed without further comment.
Personally, when I was in Morristown, I was teaching one class in the chest, and would go to him with my questions when preparing the Chassidus class. I saw his Bekius many times (his Amkus and gleichkait are way beyond me), and I personally saw his geo NJ is when he referred me to a line in kisvei Ho'Ariza"l telling me the the perek and Siman, and where on the page I would find it.
He always made sure to make kind comment and encouraging word to me.
For those who did not know him, he happens to have a very calm and cool demeanor he was not the warm and mushy type and so every time he would reach out to me it always came as a bit of a surprise, but he actually was very warm and ALWAYS say a kind word.
A true גדול בישראל, and ציור בן אדם

All Lubavitchers have payos. If you're referring to "Lange Payos" he didn't have those. I knew him personally, I didn't just see a picture of him yesterday.

Of course not
but don't worry, the mesgchistin will find something to twist the facts.
But your getting carried away.........

Was he a meshichist?
Are you a hater?
Does it make any difference? He was boki bechol hatorah kulo. He knew every Ketzos Baal peh, word for word. If there was something he didn't know, it's probably wasn't worth knowing. He was the most heilike Yid alive in his time. To answer your ignorant question, I saw him at the Rebbe's Ohel many times.

I think that is Reb Zalman Duchman a"h in the top picture, seated left.

Zweibel is a Bobover family. I think Reb Meilech has a brother in London, a Bobover, though his kids may have become Lubavitch too.

I am hunting a picture I loved! It was at your site! It was our grandmothers at the Western Wall praying all modest. I am trying tzniot, modest, Western Wall. If anyone can find the month/year date on here would you let me know? I loved that picture!

to the editor, maybe your site should have an extra מדור for announcing the deceased which seems trending here, I'm tired of stumbling into the dead each time I click here, so or others I guess. live a little.

I hear you. Unfortunately what has been happening lately is that such news is what shleps me out of my sleep here... I'm not trying to depress anybody

sara, as far i remember this site posts photos of the male species Homo sapiens variety.

" they say that there is much Chiddushei Torah from him, written anonymously or under pseudonyms in various
קובצים


Tzig, any specific examples of this? Anonymous or pseudonymous articles that the oilam attributes to him? Would love to see some. References would be appreciated.

Reb Meilach's brother in London is not a bobever, he is a lubavitcher
Reb Meilach has a sister in Montrial, married to Reb Chaim Boruch Goldberg who is a bobever with a large mishpoche kn"h

sturem, COL, hamvaser, neye chabad, lub.com, chabad.org, BeChadrei, now HT to, They all have the same news feed (for the same readers) on this famous Reb Elimilech, its a bit redundent don't you say? what else can "you" guys say of him...

A great loss. How old was he? Couldn't have been older than 75. Was he ill before or was it sudden?

Actually it does make a difference because the mechiesten have דעות כוזכות. It's like asking if one is reformed. Although have known him many years ago, I was sure that he was not.


Chalmers: "any specific examples of this"

Sorry to say it but this "An Ailemesher" name sounds like an alien something which I have a hard time to pronounce, I have a tendency to say in a whisper the words I read, and I wind up colliding my teeth with my tongue before I finish saying "An Ailemesher" any way usually I mind my own business, but this one is hard to cope with, I mean i tried to read "An Ailemesher" with my eyes only but habit takes over and boom! I hope you understand the issue it may sound query for the common man, but for us "gibberish'ers" it can create an unpleasant situation, anyway in final if you so please, I would humble ask you if it's not a big inconvenience, to please go for a name change.

I once brought MORI Rebainu Menashe Klein THe Ungvarer Rov and Rebbe ZAL to give a SHIUR in morristown. I drove him with his Shamash Ginzberg.

THis was Reb Meilich
He will be missed.

Sorry, but it is an inconvenience.