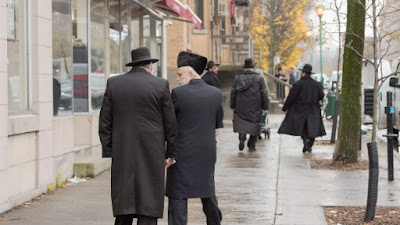 Apparently they don't like shuls in their Outremont (Quebec) neighborhood and they've been working hard to stop the opening of new ones. The old ones they can't shut down. At first they made some local ordinance, but then they were convinced to make a community-wide referendum. That didn't work out. The referendum passed. So no more shuls there. I'm not really בקי in Montreal or Canadian politics, but I was of the opinion that many of those who were for the ban on new shuls were also very Liberal and loved their French Canadian PM Trudeau. I asked: who is for this referendum, is it the Liberals or Conservatives And is all about keeping Jews out? Also, did any national politicians speak out?

Here's what I received via email: "It's not a Liberal Conservative issue, no one spoke up. (no national politicians.) No it's definitely to block Jews.  It's an upper class French white neighbourhood - business titans - government ministers, they wouldn't be happy with any ethnic group. The tensions are not as explosive as Monsey or Lakewood. It's as if Hasidim moved to White Plains - you would have the same situation. Outremont doesn't want any Mosques or Buddhist temples either."
עכ"ל

See Here
And Here
Here Too

So I guess there are two ways to approach this. 1) You can accept the fact that you're not wanted and either move on  - we're not talking a 100 miles away, just a few blocks) or make due with the shuls that you have. If you're a Vizhnitzer and the main shul is כלל חסידי just hum the Vizhnitzer shtiklach to yourself when you need to. That's what you would do if you lived in any other town and you couldn't make your own style minyan. If you're a Mendelist and the Vizhnitzer shul is either Monsey or the other Bnei Berakker then just stay home. Just kidding. Basically all of the shtreimlach can daven together. Maybe they'll rotate; one week Vizhnitzer guy is baal tefillah and the next week a Vizhnitzer and the next week a Belzer. The Satmarer are pretty easy going when it comes to such issues. מ'איז אין גלות און מ'טאר נישט אנרייצען די גוים. If they don't want us here or want us to sit quietly we do as they say. We're the minority and we're guests here. That's the old-time approach, before we became very comfortable here in North America. The previous generation would've done that. Maybe for the wrong reasons, but that's how it would be done.

2) You can לערן זיך פון די גוים and demand you rights. Make referendums. If that doesn't work out go to court. If the first level court won't side with you take it to the next level. Eventually you'll win. Maybe. And along the way you'll make lots of enemies - who may hate you anyway! Because you're different and make their neighborhood look bad. But now they have good reason to. But in the end you'll be able to daven with the other Vizhnizers and Sanzers who have the same Rebbe as you. SO that when your Rebbe comes to Outremont he'll have his shtiebel to daven at and won't have to go the other guys. Until what? Until he passes away (c"v) and then his sons fight? I'm not chas vesholom wishing death on any Rebbes. I guess the Lubavitchers avoided the issue by staying in the old neighborhood?

But hey. I live in Rockland County. I have no right to talk about others.
Posted by Hirshel Tzig - הירשל ציג at 12:59 PM

"But hey. I live in Rockland County. I have no right to talk about others."

What if your last sentence would of been your first sentence, would of I be spared of reading your full rambling of your "revised" story in the חד גדיא who knows?

* would have or would've

you seem to have plenty of time...

I guess the Lubavitchers avoided the issue by staying in the old neighborhood?

What to do about being unwanted and lack of space is indeed a difficult issue to deal with. And I don't think going to court and forcing yourself into a neighborhood is a good idea. But it sure beats the Crown Heights pogrom.

did I miss something? was there a pogrom in Montreal while I slept?

and didn't, I got married.

ps: time travels (when u have fun), no need to push it.

maybe yes and you was focused to much on the anti-Israel demonstration which was held over the other weekend in Toronto,Canada by Moshe ber'el you missed out on Montreal for to long.

I'm referring to Lubavitchers staying in the old neighborhood of Crown Heights.

AS REPORTED BY THE "ANTI-ZEMACH" BY:

Tough Jews: Political Fantasies and the Moral Dilemma of American Jewry by Paul Breines, and see all why and when the jews got Tough!

In place of the image of the Jew as morally sensitive outsider, a Woody Allen schlemiel or meek victim, according to Breines, a diametrically opposite self-image has emerged: the "tough Jew," assertive, brashly confident, condoning political violence. A history professor at Boston College, Breines examines various tough-Jew personas: leftist, gangster, soldier, militant Zionist, cowboy of the American West. The legacy of this aggressive new self-image, he contends, is brutality, militarism, racism towards blacks and Arabs. The tough-Jew syndrome emerges in Philip Roth's pugilist fantasies and in Freud's identification with the "Semitic general" Hannibal. Rambo, a personification of the U.S. cult of violent masculinity, finds an echo in what Breines calls "Rambowitz novels," some 40 works, mostly American, analyzed in this provocative, sure-to-be-controversial study, a startling rereading of Jewish history, past and present.

"Goyim who want their neighbourhood back" ??

The neighbourhood is inhabited largely by Francophones, and is home to a sizable Hassidic Jewish community, representing about 20% of Outremont's population (in 2001), which resides mainly in the eastern and northern portions of the borough Many Jewish synagogues, schools and businesses can be found on avenues Van Horne, Bernard and St-Viateur.

To Berel I am sure u wished I owned a house in Crown Heights now!!!!

Every Lubab is now a multi millionaire!!!! row homes for 1.5

My neighbor just sold for 3.1 million.


As French writer Anatole France famously said: "The law, in its majestic equality, forbids the rich as well as the poor to sleep under bridges, to beg in the streets and to steal bread."

which helped to isolate and insulate them from all other chasidim and others, for good or for bad, whatever.

So Francophones and the Englishman having a ruckus in Quebec what else is news, who's right or wrong? there aren't any, the common denominator on these issues in a free society is money, does "their" actions (whoever "they" are) increase the value of my property or not? if it does they will wait for the right time to sell it and bingo he will love the 'outsider' who bought it, if "their" actions decreases the value of their property! than they will cut their loses and run. The reality is that in all areas with flare-ups and complaints against the Jewish attitude issues, the area increased in value and the old timers eventually sold out and got rich over it (while complaining) the bottom line The complainer$ they got "over" it big time$

ps: this whole stunt maybe the works of some shrewd real estate promoter to get the attention of "prospector buyers" while sowing fear to the locals there by branding them, so they will sell sooner they they would of. think¿

Now someone do the math on this problem, winner will be announced.

ps: In a special Canadian Parliamentary Coalition setup to Combat Anti-Semitism, released a report that found that anti-Semitism is a growing threat in Canada, especially on campuses. Canada has about 2.7% of world jewry.

so he paid of his mortgages and how much was left after taxes?

As French writer Anatole France famously said: "The law, in its majestic equality, forbids the rich as well as the poor to sleep under bridges, to beg in the streets and to steal bread."

Years ago I read a story of the sanzer ruv, forgot the source
but the story got in to my head
His rebetzin had a issue with her Jewish cleaning lady,
don"t remember the details of the argument.
so the rebetzin and the helper were leaving to the bies din shtieb,
as they both were leaving, the rebetzin reliazed the holy ruv is also preparing to leave the house,
she asked him, where are you going?
the holy ruv answered
Vos Hiest, I am going to the bies din to argue for the helper, she is nebech a Orphan/ Widow, who will fight for her.....
what a sholy story....

"I guess the Lubavitchers avoided the issue by staying in the old neighborhood?" !?

"That's the old-time approach, before we became very comfortable here in North America"