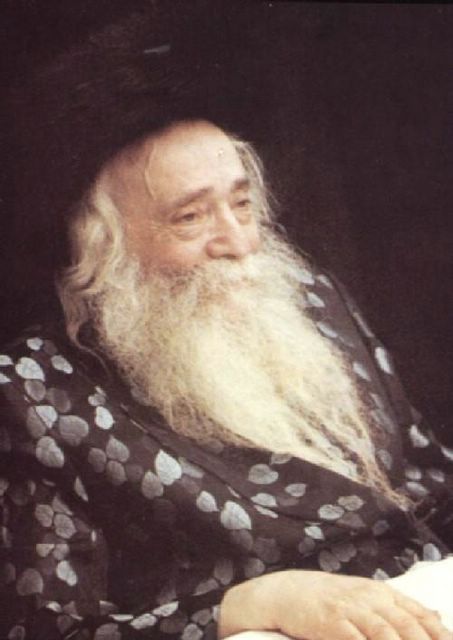 Yossi Jacobson told a story last night that he heard from his Mechutan Reb Binyomin Wulliger, a confidant of the late Klausenberger Rebbe zt"l.

The periodical "צאנז", Published by Klausenberg, would be delivered to the Rebbe, and he would read it. One night in 5751-5752 as Leibel Groner was about to leave, he entered the Rebbe's room to say that he was leaving for the night. As he enters the room he sees the Rebbe sitting at his desk deeply engrossed in an article printed in צאנז, and is somewhat "troubled". The Rebbe asks him someting to this effect "דו ווייסט וואס דא שטייט"? They had reprinted a דרשה by the K'ber Rebbe in the '50's that was full of שארפע מוסר, and the Rebbe did not approve of the reprint. He said: היינטיגע צייטען דארף מען אויפהייבען און ניט רעדן אזעלכע שארפע רייד ( In Today's age we must tell the people uplifting words, rather than strong reprimand.)

The Rebbe told him : רוף ר' בנימין וויליגער און זאג אים אז היינטיגע צייטען דארף מען אויפהייבען און ניט רעדן אזעלכע שארפע רייד . Leibel Groner thought that since it's a periodical that comes out every few months, and it had been printed already, and the next one is due out in a few months, that there's no reason to do this today at midnight. However, the Rebbe had other ideas. The Rebbe told him "call him now, this calls for him to be woken even at this late hour".

Groner did as he was told and calls Wulliger, who was already asleep, and tells him the Rebbe's message. Wulliger is incredulous, he can't believe his ears. He asks: The Rebbe told you to call me now? "yes" was the answer. He says that today we must speak in an uplifting manner. "This is a true Manhig Yisroel" he says, He sits late at night and thinks about people that are not in his immediate circle who are Yereim VeShleimim and can "take" such talk. Yet, he still sees it as being too harsh for today's times and makes a point of letting them know immediately.

Such love for a people is usually reciprocated with love shown towards the Rebbe.

Can you understand this?

I stumbled accross this site recently, and i've been reading it without comments, but it's sad.

Since your movement is bankrupt you stoop to fabricating stories.

Join,
I love it when guys like you show up. It reminds me why I have no interest in the main-stream.

Noch a babbeh mayseh.Not that I don't think it's true, it's just silly.
What would you say if Groner was woken up past midnight so the Rebbe could be notified how disastrous the false moshiach campaign will end up being.

I really wish you'd translate the Hebrew in your posts. I think you'd be happy to know that some of us may not read Hebrew but have an interest in what you have to say. Perhaps put in parenthesis what's being said in Hebrew?

Thanks--
A Hebrew reading non-understanding Jew :)

Maybe Lazer Shach was a fabrication? I mean did anybody really test him to see ayb er ken lernen a blat Gemorre? What about those Bubbe Mayses they say about his time in Russia? I mean what kind of a name is Shach anyway?

ok, Tamara, I did some with you in mind, but I'll be all-translating from now on.

Ponovitcher (sic),
There is no way he could have held his job if he wasnt the real deal. Unlike a Rebbe, a Rosh Yeshiva has a job that will discolse him if he was a fraud.
All you Chassidim don't get it. We Litvaks have a system that is on the merits, not the clothes.

123
Yes, but he may have had some compelling pictures of the Ponovizher Rov or of Reb Shmuel, or he may have threatened to expose Reb Chatzkel for something he did in Shanghai?

Chabadsker, you are below disdain.
Is that what your mashpia with the long white beard, who looks like Eliyohu hanovi, until he opens his mouth said?
Go get drunk again aka 'farbreng'

"We Litvaks have a system that is on the merits"

HAH! Ever hear of Lakewood, how'bout Mir. Perhaps we ask the Sorotzkins to comment on that statement.

For that matter, maybe they could comment on mms's lasting contribution to judaism. I've heard it. Not at all complimentary.

Tzig, are you implying, that machloikes is an innovation of the 'snags???Unfortunately machlokess is as old as Kayin and Hevel.What is unusual is that an Orthodox group should be promoting a false messiah on a worldwide scale unseen since Shabtai Tzvi.This does not bother you.Neither does it bother you that many in your midst believe he is alive and promote this nonsensical belief.It does bother you that your 'chasides' has sprouted members who claim the rebbe to be a deity, creator.
Chaver mayneh, look in the mirror before you blame your own ills on other groups

Never to the point, how typical.

Exactly how many times did the Klausenberger rebbe visit the Lubavitcher rebbe (Remember the Klausenberger lived in the US most of his life ) ?
By the way Zanz is a fantastic journal chock full of Chassidic Torah, Nigle, Drosheoth, Minhogim, biographies of Rebbes especuilly Halberstams vechuli. I don't blame the Rebbe for reading it . It was a far better Torah product than ....

Actually they lived for a nice couple of years less than a ten minute ride away from each other when the Klausenburger lived in Willy.As far as I know they never met.Shows how 'close' they were.
Tzig:Typical you for not answering my question:Why do you blame 'alerlay krenk' on us?The Meshichisten are YOURS, the boreinuniks are YOURS those 'frying out' are yours.Do something about that or shut up

Q: How many times did the Belzer Rov visit the Chazon Ish?

they lived minutes away for 9 years.

Q: how many times did the Satmar Rov visit R' Kotler?

A: Other Than Nichum Aveilim, I believe NEVER.

WHAT DOES THAT PROVE?

Tzanz comes out once every few months, whereas Kfar Chabad every week. They have more time to preparea better journal............

It is true they never met, it was always letters and messengers back and forth.
But, for that price you can say that there was no connection btwn the Rebbe Rashab and the Rebbe because thay never met. (even though the Rebbe Rashab gave strict instructions to th Rebbe's parents how to deal with him as a baby and was also his unofficial shadchan).
But nice try.