Another Shul bit the Dust 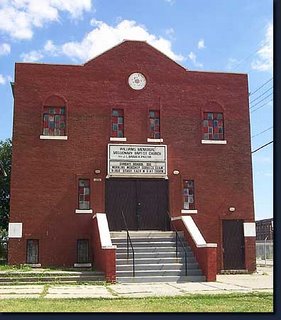 Called the Stoliner Shul because the people who founded the synagogue came from the town of Stolin, Russia.From "The Lost synagogues of Detroit"

Related Article: My Neighbor, The Rebbe: The Stoliner Rebbe From Artcroll.com About Reb Yakov Chaim of Stolin, aka Di Detroyter, because he passed away while visiting this shul.

It's stories like these that reinforce the belief in the Rebbe. The Rebbe fought for every shul in Crown Heights, not allowing for the Shuls to be sold as churches Rachmono Litzlan, as they were elsewhere. In the surrounding areas of East New York and Brownsville the Mogen Dovids are still very visible on the buildings, as are the Jewish stained-glass windows. Many times the battles fought for those shuls made enemies for Lubavitch that still do not forget. Just ask the Bostoner Rebbe's family, or the Spinker Rebbe's. But what would you rather see, the Spinker Rebbe's shul as a church?

This particular shul in Detroit was still maintained by Lubavitcher Chassidim in Detroit until the Stoliner Rebbe sold the shul, just like he did to his Zeide's shul in Williamsburg. They still come every year to his Tziyun, but I guess they don't daven in the Shul anymore...Great Chassidim of his Zeide who still lived in Williamsburg never forgave him for that. Yom Tov Erlich even took him to Din Torah! But he lost (what else is new, eh?) I guess the few dollars are what's most important. I'm quite aware of the situation in Detroit, with all Jews running away like it was the plague or worse. But it seems like there could've been a more favorable solution for this shul. A church doesn't seem like a fitting ending for this house of worship.
Posted by Hirshel Tzig - הירשל ציג at 11:05 AM

Another below the belt hit by the Tzig. What else could be done to a shul that was in a totally Shvartze neighborhood? Detroit is like Baghdad, you expect people to come and Daven in such a shul?

Williamsburg is another story. That was Takeh inexcusable. But I guess a Rebbe is infallable, so there must've been some lofty reason for it....

it is exactly the opposite, in Williamsburgh he sold it to another shul, they Takeh don't scream as the stoliners but it is still a good orthodox shul.
but detroit is no excuse, if 10 people still want to uphold the place he should do the outmost, I guess it doesn't grab Headlines as the lunatic Bliech of Ukraine.

In Williamsburgh he forced old time Yidden, Stoliner Chassidim B'lev V'Nefesh to have no place to daven! These were Mesiras Nefesh Yidden and he could care less.

In Detroit he should've at least razed the building and then sold it, having the Mogen Dovid and the 4 walls Ongezapt mit Yiddishe Tefilosthere while serving as a church is unforgivable!

'It's stories like these that reinforce the belief in the Rebbe'
Tzig:I want to point out that your choice of words make me uncomfortable:What do you mean 'belief in the Rebbe'?As Moshiach?G-D? and why do you continuously need to reinforce your belief?.Basically your point should have been that in your opinion, unlike other rabbis the Rebbe tried bemesiras nefesh to save the shuls and the neighborhood.Simple point agreed to by everyone.Why be bombastic?

to Faish
I think it reinforces the idea that in our genaration he had the capacity of Yilchom Milchamos Hashem even when it wasnt trendy.

fair question faish, but only because you have preconceived notions about Chabad and their supposed beliefs.

Emunas Chachomim/Tzaddikim is something you know of, correct? So Emunah would be translated as Belief, right? So why the need to explain and spell out what I mean? Why is that considered bombastic?

I am a human being who has conversations with people about matters such as this. They complain and have Taynes about these issues. These complaints may have negative connotations. Stories like the Stoliner shul in Detriot reinforce.

Hirshel
Thanks for explaining yourself but I still think you made a poor choice of words very easily misunderstood, you write for others not for yourself so try make yourself understood. Stam azoi, though the Rebbe fought bemesiras nefesh for Crown Heights and showed that it's possible to fight crime and save neighborhoods, ultimately I think the stand in Crown Heights was no good for Lubavitch.It's still a high crime area, still pretty scary late at night, still neighbors who have a very different fsmily life, ideals, drugs etc.You can see the influence on the young Lubavitcher kids and their dress.Wouldn't it have been a lot better to move to Boro Park/Flatbush ?(actually apparently R'Shmerel Gurarie built the large Lubavitcher yeshiva on Ocean Pky because Crown Heights looked like it was finished at the time)Would Pesha Lapine, Yankel Rosenbaum, Klein and others Hashem Yinkom domom been alive today?

As it is known for ill or for will the rebbe was not pragmatic when halacha and yiras shomayim was at stake,and he had major hatzlacha in all his endeavors,altough it is far from his expectations,
BTW if in the history of CH there was only 2 murders, williamsburgh to my recollection had the same figure, wertzberger the shamash and the sephardic girl under the bridge, so stop with this and other nonsense about kedusha subjects, the Clemente Projects and the other ones is almost like
living in 125th st in its heydays.

Was the Wercberger murder a botched robbery with him being a case of mistaken ID, or was he the target?

Wertzberger was a robbery gone bad iirc correctly he worked on 47st and had diomonds on him and would not give up to the robber who than shot him.
Unfortunately Crown Heights has had more than two murders:Pesha Lapine, Yankel Rosenberg, Klein recently and others, years ago.I think a young bochur was killed about thirty years ago.Whatever the case Crown Heights is about a quarter the size of Willy and has much more crime,I remember that everyday Crownheights info has another story of a mugging, robbery etc

CH has unfortunately had a lot of murders over the years, including the Goldman boy, and Yisroel Meir Rosen from Melbourne. Then again, Jews have never been safe anywhere. Reb Hersh-Meilech Hecht, the zeideh of the six Hecht brothers, was murdered in 1938 by the sheygetz who worked at his mikveh in Brownsville.

I had no idea about the Hecht Zeide!

What was the motive there?

It is irelevent why Wertzberger was killed, most of the stories are conspiracy oriented, non of them have proven factual, if you are going back so many years there is a Eisdorfer that was mugged and killed in his store on Williamsburgh East

Millhouse
Who was Yisroel Meir Rosen from Melbourne?When was he murdered?
Guys:Why is it so hard to to agree even on the simplest things?Crown Heights is a high crime area!The one issue that always gets the most comments on Crownheights.info is crime!People are in fear and it's also the reason that our dear Hirshel lives in Boro Park.Williamsburg is a very safe neighborhood even safer than Boro Park.There are a couple of reasons:Firstly very few 'schoirim' live there and you can check the statistics that they are to blame for a very high percentage of crime. B)There are four times as many yidden in Williamsburg, which means that they have a very effective shomrim and good connections with the local precint, it also helps that any goy who has seen a chaptzem knows not to ever try again.C)The Jewish area of Willy is 90% Jewish or higher, besides for the housing projects which are about a 60/40 ratio in the yiddens favour.The 'New Williamsburg' area, up Bedford Ave past Myrtle is takeh not so safe.

Crown heights was fine when I lived there, it's only the last year or two that it's gotten pretty bad. What actually happened there I do not know.

The people of CH can learn alot from Willy, they just won't. It's a crying shame.

Yisroel Meir Rosen was killed about 25 years ago, I think. He was a yid from Melbourne who happened to be visiting NYC at the time. He was a nice guy, but not the most successful person in the world; he was a shadchen, which can't have been made easier by the fact that he was divorced himself. I heard he was stabbed in the subway station, by some finsterer shaygetz who boasted that he had "killed a Jew in Jewtown".

Re the Hecht zeide: besides running a mikveh and other inyonei klal, he was a gabai tzdokeh. The sheygetz he hired to work at the mikveh broke into his house to steal the money, and when he was disturbed in the act he killed him. (This was a time when jobs were very scarce, so the guy owed him a debt of gratitude for having hired him, and this is how he was repaid.)