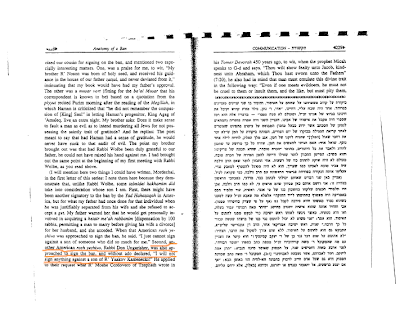 "Anatomy of a Ban," by Rabbi Nosson Kamenetzky 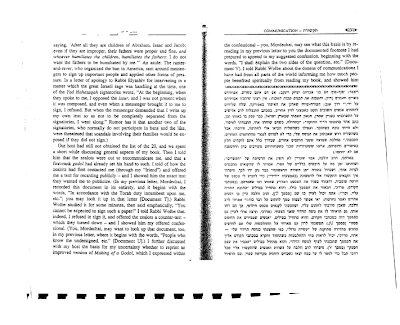 In one of the obituaries last week they used Reb Dun's Hakoras HaTov as an example of his exemplary middos. The anecdote they used was a bit silly, but it seems like there was something we could learn from him. {the example was him flying to Florida to attend the levaya of a woman who did "a significant favor for the Yeshiva." I think we'd all do that... This would've been alot better, but we know they wouldn't use this...] I assume that it was because Reb Yaakov was his Rebbe at YTV, as well as took his side in the YTV and subsequently, the BME um, disagreements, he had with RGS and later, his family. {I could be wrong.} Reb Natan has less than stellar words for Reb Shlomo Wolbe, who he says owed just as much to his father...

Thanks to the anonymous reader who sent in these pages. Maybe he can send in some more... It seems like another page or two would clarify the picture alot
Posted by Hirshel Tzig - הירשל ציג at 10:26 AM

Email ThisBlogThis!Share to TwitterShare to FacebookShare to Pinterest
Labels: Anatomy of a ban, Kamenetsky, Ungarisher, Wolbe

if you can procure the whole book it would be a great public service.
It would be timely because RDS's son was the ring leader.

I guess they took after their mother, eh?

Who is Yankel Katz of Hartford?

this whole nepotism that not giving my signature on a broadsheet, to ruin someones life, because he is my cousin or his father did me a favor, is a disgrace.
If you have to sign, then sign even on your own son-brother- father. If it is not that important then dont sign on nobody else.You have no right to spill another jews blood