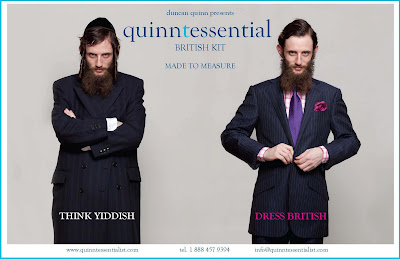 Luzer Twersky modelling for some British clothes manufacturer. Are they actually British? I cannot tell, the website they list in the pic doesn't seem to be clickable, so it's hard to glean any info from there. Luzer is a Rebbishe kind, his father is a Rebbe in Boro Park, and he decided to take a different path, a path not associated with Religious Jews, which is rare for Rebbishe kinder. Rebbishe kinder seem to be stuck in the rut that was created for them and they don't really get out much, even in a permitted way. [The only other time in recent memory was Reb Nachman Yosef Twersky, who left Rachmastrivka in Yerushalayim to join the Army of Lubavitch. And boy, did he ever get it over the head! And Lubavitch too!] Luzer is no longer with us ideologically, but he keeps his beard and peyos so that he can get acting jobs that call for a beard and peyos...  Those are his own words. For a long time that seemed to be wishful thinking, the agents weren't calling him, but no it seems like he made the big time! I dare say he does quite a good job here!

And lest you think that I only attack non-Chabad, read this and weep!
Posted by Hirshel Tzig - הירשל ציג at 8:17 PM

is she from The shiff family in Benai berak

His Ziede was a kodesh vetohar masmid, goan betorah, since then it is all nebech mental ill, it is not that every boy otd is a mental case but he is nebech...

just today a vodka advertisment was taken off the West side hiway, after pressure of the Bnie Brith who are looking for issues under every stone,
it had 2 puppies with a line Hanukah prices..

its ironic that this post landed under the Bezer Skverer letter.
this boychic is also a einikel from both, plus many more..

She's very attractive. Hirshel,is she single? Parhaps you can act as my shadchan?How much do you charge?Actually she's alot prettier than the other Israeli so-called super models.I now have new respect for Anash.Actually she's doing nothing terribly wrong in the clip. Just modelling some lipstick.I've seen Lubavitcher women and older girls just as made-up at all kinds of events without anyone giving it a second thought.Maybe her next modelling job will be for the latest fashionable "Shaall?"

and he decided to take a different path, a path not associated with Religious Jews, which is rare for Rebbishe kinder.

Can you open more than one finger to count the religious descendants of the Tzemach Tzedek??

How do you pronounce Luzer? In this case, I'd pronounce it exaggerated Lipa-Ingarisch style, vehamayvin yavin.

I recently saw a clip about a former Satmerer named Weiss who is starring in a Yiddish film version of Romeo and Juliet.When Katle Kanye[shabbes bletl] and friends finish their Yiddishe "teater" and Kultur Tzenter on Rodney St. there will be a lot more Rebbeshe kinder besides Luzer trying their hand at acting and directing...just like in der alter heim ven di velt iz noch geven a velt...

his kinder, meaning sons. But you knew that. You were stam picking a fight, right? right.

See OP ED today AT:
http://www.crownheights.info/index.php?itemid=39274
It is for certain however, that Chabad is evolving, just as everything does, just as Judaism always has. It is doubtful that the Jews who left Egypt thousands of years ago years ago looked or behaved anything like we do today. And I doubt that the Alter Rebbe's chassidim would think you were more chassidish for wearing a white shirt and Fedora as opposed to a striped shirt and a kasket. Lubavitch itself has evolved, from tiny shtetl life to big-city life. And though this may sound brash, it seems to me as though the Rebbeim changed and evolved as well. There was no Rebbe before this one who went to university, worked a regular day job, changed from a long bekeshe and shtreimel to a modern suit and hat and who for some time had a very nicely groomed beard. So yes, Chabad and the Rebbeim have evolved. And now, with no Rebbe to actively lead and guide the masses, it will evolve even more.

just realize, you compared nachman yosef twersky converting to lubavitch to this shameful bum tossing yiddishkeit in the toilet, point well made, but even i never would have made it.