"Heimish" is as "Heimish" does 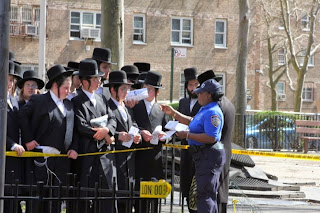 CR: Whatever is done in willy becomes Heilig and Heimish, since they buy the most G&G long suits in our doir. Imagine if the NYC housing projects would've been in any other Yiddishe neighborhood and Jews would utilize it for their cheap shelter, then the shprach in Willi would be, nebach on these Jews who expose their kids to Sedom Ve'Amora. The Beach in Eilat is 1,000 times eideler than the projects, ask the kids that lived in Clemente or Wyhte Place, the corridors are brothels, officially. But since the Heimeshe live there it is the norm. This is their attitude and obviously their leader is in the same drekk. Imagine if [Mayor] Barakat [of Jerusalem] would build these projects in Meah Shearim, they would holler in protest for years to come, like years ago with the pool in Yerushalayim.


Funny how we never think of it that way. We had a rebbes in Spinka kheyder kita gimmel and daled who lived in these projects, and once a year, on Purim night, we would go deliver Shalikhmoones to our kheyder rebbe. It was a חויה for us Boro Park kids to go to holy Williburg bikhlal. Willi - in our minds - had the REAL holy Jews living there. Not like in BP. We yearned to be more like them. But I gotta tell you, it was weird going up there. אין באראפארק האט מען נישט געוואוינט מיט גויים אזוי אין איין בנין. There were a few kids who lived in Apartment buildings, but that's not public housing. But we sometimes do strange things in life if we convince ourselves that it's OK. Or if it helps out get through life just a little bit easier. Like the title here says: Heimish is as Heimish does. If it's the norm and accepted we usually don't give it a second thought.
Posted by Hirshel Tzig - הירשל ציג at 12:05 PM

Litvak on the sidelines said...


Vos me voint mit der tunkelach on the fringes of Crown Heights is any better?

And what about what Don Yoel Levy alein is promoting in the geggen?

Normal is as relative a term as heymish.

The dor hashvii of mtzrayim thought the shibud was normal.
Born in the midbar thought mon and the be'er was normal.
Dor entering ey discovered a new normal of planting crops for food.

Vos me voint mit der tunkelach on the fringes of Crown Heights is any better?
Dos Hot Hiemishe Lokshen gemient,
In CH 95% are eidele tunkele with a 9 to 5 job, and own their own house.But in Ir hakodesh they are out of the vonerter fun di baherde.,fun the Nidregste...
But who care. its Hiemish thats why it is great....

you do know that the poll in y-m was about chilul Shabbos don't you?

As a BP boy who visited relatives in The projects regularly the answer is simple.Why did the Jews in Germany Intermarry because there the culture was proper and there was maybe something to Mach Nuch but in Russia Ivan the Drunk was a shikkur and everyone "SAW" IT AS SUCH. Hence in Willi seeing it is the BEST THING there is an Us versus them. In BP there might be something admirable. VIMEOD KAL LIHAVIN

the point of knowing said...

Dovy
I dont know, it was decided by a person who had a hangover that he was always correct.
It was not a bigger chilul hashem then a pool in Monsey next door from a new development or a hipsters doing it all on roofs next to a school in willi

the point of knowing said...

Dovy
Find a better word if you find one

Hirshel
You learned by Zelik Wiess?

The projects in willy are more than half chasidesh,,and the goyim are poor working class, it's really not so bad.in the Jewish areas of willy which is very big, besides for the projects is almost all yidish
Schraga feivel

yes, Kroler, I did. But I don't recall him living in the projects. Did he?

Hirshel
I knew Zelik well
He was a average Satmarer, He was friendly with outsiders, and had a total different view then his facade. I think he was a Eidem by the Hadaser Rebbe (shaler Rebbe)of Bedford Ave.
Ver Es Farshtiet Der Farshtiet
Chaval Al Deovdin

I think the wife was Fisch from home. Salka family?
Reb Zelig was niftar?

yes he was niftar

I may have heard that once. He was a nice guy. Took over for a terror of a Rebbe who moved up to 8th grade.

I thought there was an (unofficial, of course) "upmach" in Willy that only heimishe can take over an apartment from existing heimishe.

So don't these building become all heimish in short order?

picture of the day said...

May I just say what a comfort to uncover someone who truly
understands what they are discussing on the net.

You definitely know how to bring an issue to light and make it important.
More people have to look at this and understand this side of the
story. It's surprising you're not more popular
since you most certainly possess the gift.

That is definitely a private best for me.

Can I simply say what a comfort to find an individual who
truly knows what they're talking about online. You certainly understand how to bring an issue to light and make it important.
More and more people ought to check this out and understand this side of your story.
I was surprised you are not more popular since you
most certainly possess the gift.

I always emailed this weblog post page to all my friends, because if like to read it then my
links will too.