Ysoscher Katz proves to us that blood is thicker than water 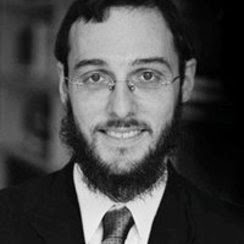 Blood is family. Family and friends. Water is, well, I'm not quite sure what water is. I guess it means acquaintances, fellow bloggers... I'm not here to attack or "expose" Reb Sucher. His story is well-known, and he makes no bones about his past life. And you might say that I can very much relate to him, the defending his old friends part. There were several occasions lately where I could've written about stuff in the frum media, but I knew that the people who would REALLY enjoy it are the haters, and why give them fodder? And you might say that I admire his courage to stand up and defend his people. Especially if they're (read: Tablet magazine) just hocking. This despite the fact that Tablet is using the same kind of logic Reb Ysoscher would use on any other topic. But אלץ האט א שיעור. ביז צו די פופיק. I can write about these topics, not you, Tablet Magazine! So maybe there's hope for Reb Ysoscher, after all? אפשר וועט ער "קומען צום שכל" און צוריק ווערן א היימישע איד?
Posted by Hirshel Tzig - הירשל ציג at 11:45 AM

Scratching the bottom of the barrel said...

Are you saying Lubavitch can use all the help it can get?

It doesn't shock me vos me brengt Ysoscher Katz from Avi Weiss's cesspool YCT because the head of Reform, Rick Jacobs, was already paraded around the shluchim convention like he's episs an adam gadol.

nobody asked for his help, nor was he offering any. He just mentioned it in passing. His defense was of Satmar.

He'd have to live as long as shalomi to get a chance to do teshuva.
He'd have to get divorced again and learn how to have dveikus while driving to shul on shabbos.

not a Harry,
he's divorced?

" head of Reform, Rick Jacobs, was already paraded around the shluchim convention like he's episs an adam gadol"

Taka Amazing that some yiddin can join Chabad ....Anash 30 years and this guy gets the honor while ....