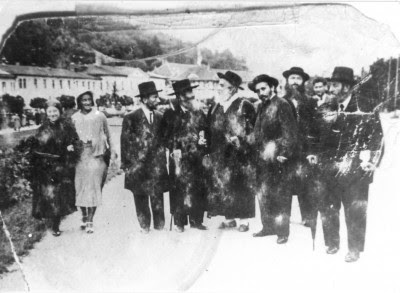 Hirshel: what we have here is a rare and telling photo. The holy Munkatcher Ruv, who used his pulpit to rebuke and flick anyone whom he accused of not leading his life according to his "אבותינו ורבותינו הקדושים " is seen in this photo walking with 3 men, and to his left is the holy Rebbetzin, daughter of the holy Komarner,  and a not so holy friend,  in one of the resort regions. No Poylishe Rebbe would be caught in such a setting, walking with his wife. No sir. I'm not saying there's anything wrong; I'm just bringing this to light. Years ago I heard that that the holy Munkatcher once saw from his window an Oyberlander Rov strolling the Munkatch street with his Rebbetzin. At 12 o'clock  noon he took out his golden watch from his vest pocket and told his lovely wife:  I must go and say tikun chatzos. This was during the three weeks, you see, and the Oyberlender Yidden have such a custom. [I guess saying it at midNIGHT is too difficult and disrupts their schedule?] The holy Ruv is said to have screamed from his widow: ס'האט גארנישט פאסירט, you can keep on strolling! As if to say, if you walk with your wife on the street G-d doesn't need your Tikkun Chatzos. We see that approach today with many people - like if you wear a long sheitel G-d doesn't want you to daven.

Huh? You are just trying to rehash old dreck, what is the yatzer horo to repeat and disseminate old loshon horo?

Hate to burst your bubble, since you went through so much effort to get your point across in your post, but that IS NOT the Reetzin of the Munkatcher Rebbe, nor is that a daughter of the Komarner Rebbe. It's just an innocent bystander who happened to be strolling down the same boulevard as the Rebbe and entourage. Sorry :(

So sorry to brst your bubble but the 'rebetzin' in the photo bears no resemblance to the wife of the Mincas Elazar, daughter of the Komarner Rebbe. They are just innocent bystanders who happened to be sharing the street with the Rebbe and his entourage. Sorry :( better luck next time!

you are so passe'

Sorry to burst your bubble but the 'rebetzin' in the photo bears no resemblance to the Minchas Elozers rebetzin (the daughter of the Komarner Rebbe). They must be innocent bystanders who happened to be taking a stroll on the same avenue as the Rebbe and his entourage. Sorry :( Better luck next time on your Munkatch bashing...

you are so "old news"

tzig, you are the manifestation an old time blogger, who doesn't know the velt is moving

Q.What do both Tzig and I have in common?
A.When we post here we're both talking to the wall.

The munkatcher rebezein was a very powerful figure till this day no one knows who her first husband was, after munkatcher rov was niftar the chassudim were looking someone like him the son in law reb burchel was not up to the father in laws kanous part of the rebistive so the chassidim thought of bringing to munkatch for Shabbos the kolshitzer rov who was a kanoi the rebbzin said yes only on one condition that he leads the tish toghter with her son in law reb burchel she was very against reb burchel going to eretz yisroel she did not let him have the manuscript of the last chelek of minchas elozor the rest is history the manuscript was burned in the war

You are linking back to your old aveiros. After reading that thread, I could really use a shower.

sorry to burst your bubble Tzig, but that’s not the Rebetzin of the Minchas Elazar, nor does it bear any resemblance. They are just two innocent passerby who happened to be sharing the same street as the Rebbe and his entourage. Do your homework better next time before you build an opinion and bash a gadol based on an assumption. If I were you, I’d own up to it and apologize and delete the post.

Hirshel
what are your old sins?
is Litvak from magyar from the revolutionary guards keeping tabs on everyones sins?

One thing is for sure, your popularity hasn't done too well. From 71 comments...

Tzig: No Poylishe Rebbe would be caught in such a setting

"If I were you, I’d own up to it and apologize and delete the post."

on the other hand since he posted it some virtue may come of it, by people commenting here that this photo was not signed by "Getty" photos so to speak, and the implications implied are false. now its known, for those who "want" know.

anon
" after munkatcher rov was niftar the chassudim were looking someone like him "
If I remember well, the munkacher ruv writes in his will Al kisie loi yieshev zor,
that other then his son inlaw should not take the position...
how did the chasdim dare to take someone else?


Hirshel probably took a walk with his rebetzin on main street in one of the long summer shabos afternoons, and some drelyak peered on him with his pious eyes.. So he let him know what his rebbe did on dacha. and if it "wasn't" his own rebetzin walking with them, Nu? than it's even worse than Hirshel on main street!

Y "why his daughter Frimel picked up his wine goblet"

And why not? do u think Udal the behs"t daughter wouldn't of do such think? my teacher told me once rebbe elimalech in his wandering days an orphaned girl put down a Becker in front of him and he ran out of that house, but not his daughter duh.

עושה מעשה בראשית said...
Tzig: No Poylishe Rebbe would be caught in such a setting

their is a memoir of a satmar or krulle era talmid
that satmar was strolling with his new young rebetzin around some lake
did you see it?
lets deny it....the guy is a mizrochi, enemy of the rebbe

so far nobody has proof its not his rebetzin

Fact: It is the wife of Reb Mordechai Williger za"l. He is standing to the ME's left, viewer's right, peering into the camera.

the elderly women is not mrs williger

he's a fiction writer and mixes image gossip and truths which makes him a good writer, but he's in his stomach a "satmarer Talmud" who became a mizrachest but tries to soften the rebbe's image before the rebbe came to EY which he did than in a "journalistic way". he even visited (with a kvitel) the rebbe years latter, and the rebbe quipped with him.

He must of meant the SR (where most survived became "his" chasidim of..) he didn't mind the kolshizer ruv to be his SIL crotch and to authentic (baby sit) his SIL until the time came and his wishes did came true.. we have now מונקאטש בתפארתה again.