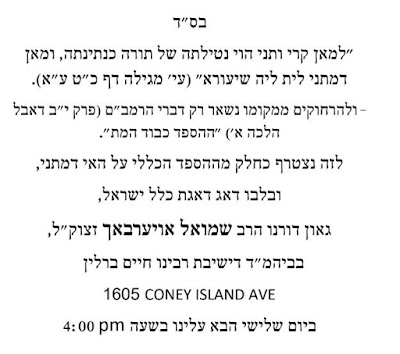 YRCB is having a hesped to mourn the passing of Rav Shmuel Auerbach. They're bringing all the Mechablim in America, Reb Elya Ber and Reb Malkiel, as well as R' Shmuel Markovitz, the Mechabel from Ponovezh. Which is fine. I'm just a little surprised that they're thumbing their noses at the leadership in Eretz Yisroel, Reb Chaim and Reb Gershon Eidelstein, etc. But that's their problem. The only problem is that just a few weeks ago, after the passing of the leader of עולם התורה Hagaon Reb Aron Leib Shteinman, zt"l, there was no such hesped. Why? because the Rosh Yeshiva at YRCB said despite being "the Rebbe B'Yisroel" he had no influence over the Yeshiva on Coney Island Avenue. Nor over the Rosh Yeshiva. But when RALS came to NY they shlepped him to the Yeshiva to speak, even at 95 years old. I wonder how much influence Reb Shmuel had over them.... Where's the intellectual honesty, folks? 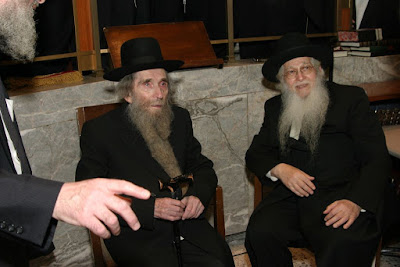 See this story, when RALS passed away

Reminds me of this gem on the blog, way back when...

About time someone exposed them.

Chaim Berlin is not mainstream Yeshivish. They are now Satmar extreme controlled. The head rabbi in his frock along with his two nobody sons are a pathetic joke. Two beards with a frock. Literally zeros.

It all started as a lo tzayis dina. Fruchtandler and the esteemed Schechter mishpachos had some really good "family" Jerry Springer worthy tzaros recently. One can only imagine what their real punishment will be for what they did to Rav Carlebach years ago, or even worse -- how they ignored the Posek Hador, Rav Moshe Feinstein.

What a bunch of baalei mechutzafim. They have a real hot place in hell waiting them.

So if someone wants to be maspid a gadol they are thumbing their noses at leadership in EY?

The facts are very simple. There is a machlokes whether to register for the draft or not. Some Gedolim say one way and some the other.

Doesn't everyone have a right to choose a side in this argument?

As for RALS coming years ago to CB, two things:

1. This draft machlokes was not flourishing then
2. CB did not shlep him to speak there, his entourage requested to have him speak at all the large yeshivos in the area.

It's about time that "the Tzig" gets back on the map!

CB did Shlep him there. Schecter is on the Moetzes, when the trip was arranged by the Agudah. Stop denying the facts.

And second, the point is that Shlechter has the audacity to say in PUBLIC in his wannabee Yeshiva, that his Yeshiva and himself never had any hashpa'ah from Rav Shteinman. Aha... so the Shmooze Rav Shteinman delivered in his Yeshiva doesn't count.

You clearly are a Chaim Berliner. Schechter is a horrible person. This is Chinuch? Showing hundreds of Bochrim how to fight?

What do you expect, the ראש הישיבה is a Vizhnitzer.

Do you think that would have happened in the days of Rav Hutner z"l?

Tzig!
Good move!
Bringing back CB.
The greatest days this blog has ever seen is when you had good CB reyd.... Threads with hundreds of comments, and some really interesting discussions.
I wonder if CBT and VN will join the fray, we haven't heard from them in years...

the Yeshivah world became so politicized since the regime of the holy Rav Shach
he came up with the idea of bnie torah without torah. and bulldozed whoever was in his way
In Willi one of the Maspidem said that reb shmuel was the real manhig that mirrored rav shach
what a shvach to repeat in a hesped.....

I do not know whether it's just me or if perhaps everybody else experiencing problems
with your site. It seems like some of the written text within your posts are running off the screen. Can someone
else please comment and let me know if this is happening
to them too? This could be a issue with my internet browser because I've had this happen previously.

Great photo of Schechter and the gadol hador.

Schechter licking up the kavod that rav Shteiman ran away from his entire life until the last breating monent. Just look at his tzavah. Wanted 18 people at his levaya.

The comment above about the Jerry Springer material in the Schechter-Fruchthandler relationship is 100% what I was thinking of.

If you are mevazeh the Torah, you will be done the same to you. Kida kineged midah.

Hashem is not a shosek on bizuy talmidei chachomim. See the gemara.

I'd be worried if I was a Schechter or a Fruchthandler.

***BREAKING*** Look into what happened on Purim this year...

The chief Frock publicly humiliated a supporter of the Yeshiva. He recently pledged a few hundred grand and had since pulled his pledge.

and you guys are calling the Satmars haters? shame on you talking trash on each other? the hoods in the Barrios have more class.feh.

What a bust. Schechter spoke for 30 seconds then say down.

And the Mechabel from Bnei Frock talked like the typical shoita. Utter nonsense from Markowitz.

Good job Chaim Berlin! Once again removed themselves from the mainstream Bnei Torah crowd and into the Neturei Karta camp.

OOh Wah!!
This place id Knocking!
It almost feels like 2009 all over again...
Whers Snag and Hyman?

(Continued)
But then Chabad
And CB Had always a lot in common..

(Even if in disguise.)

Wow 222 comments! Your almost making into the big leagues Tzigelberg!
You might even reclaim your days of glory!!

Everyone who cares and matters is well aware
How much RALS carried on his shoulders [the whole world] the past years,relative to how little RSA carried WADR B'mechilas Kovodo
except to throw a radical monkey wrench into Klal developments
-unless of course someone suffers a need to shake off ennui and/or has something to prove


-From someone who was affiliated with HaPeles at it's onset,but switched when grasped the matzav

For the record, it is clear that RAS does not hold of Reb Ahron Leib; that was the gist of his statement on the attached audio.

The fact that he had to repeatedly stress same, publically, immediately after the petirah, is "hilchos deyos" at its finest.

Globally, the fact that the hilchos deyos clan are clearly incapable of appreciating the maylos of Reb Ahron Leib is disturbing as well as "katnus" (in their parlance).

Fed Up in Peoria said...

Anonymous,
My point was that the hypocrisy charge is unjustified, because the reason for hesped/no hesped was not influence/no influence. It is clear that RAS does not like RALS ("the guidance he gave was 'mainly' good) and that is obviously the reason for no hesped.

The charge of hypocrisy is 101%


The ehrilche had to over the come 'round and adapt to this more or less,
though with obvious condescension

Leiby. You are right about the no hesped for Rav Steinman. Yet, I suspect that the kovad for Reb Shmuel has political undertones.

Regardless, my points stand.

It behooves me that a group can not appreciate a life of prishus, intolerance of sheker, not seeking
"Kovad" etc., which traditionally have been admired by us.


But the same could probably be said for Chabad

Hold on, just a little bit longer, the Chortkover Rebbe is on the way!!!!!!

MBD, HEY WHAT ARE YOU SAYING???? NO MORE CHORTKOV PLEASE-IT FINISHED VERY NICELY 60 YEARS AGO, I HOPE NO MORON WILL COME AND MESS UP A CHASIDUS WHICH STILL HAS A GOOD NAME.

HIRSHELE, Please be able to except other opinions besides yours. Rav Averbuch was minimum as big as Rav Shteinman (and in nigle v nistar pashtus he was much more).I did not see too much haspeidim by Rav Shteinman people on Rav Averbuch.

RSA
said consistently [there is even a video clip from couple decades back] that he was uninterested in getting involved
And essentially kept it at arms length ,
..except insofar as when some youngsters biryonim who needed to have someone, anyone, later convinced him into allowing them to use his name

Good response in return of this query with real arguments and telling all about that.

Schechter never met RSA in his life. Never spoke two words for him. And he is making it like he was the manhig of yeshivos. This is a filthy disgusting game of politics that Schechter engaged in.

The rooster will come home to roost. Bring markowitz into a Yeshiva and the chaim Berlin Bochrim will go down a very slippery slope.

Schechter should be ashamed of himself. And Fruchtandler right up there with him.

"That can be seen on a blog called "Circus Tent". There one will find an invitation (in Hebrew) to attend a eulogy for Rav Auerbach in Rav Schechter’s Yeshiva. That is not so unusual and indeed should be expected in a Charedi Yeshiva. What was not expected was that apparently there was no such eulogy for Rav Aharon Leib Steinman in his Yeshiva. (...at least according to Circus Tent. I will be happy to be proven wrong.) Rav Schechter apparently said very little about it (available in a brief recording there)." -Harry Moraless

"That can be seen on a blog called "Circus Tent". There one will find an invitation (in Hebrew) to attend a eulogy for Rav Auerbach in Rav Schechter’s Yeshiva. That is not so unusual and indeed should be expected in a Charedi Yeshiva. What was not expected was that apparently there was no such eulogy for Rav Aharon Leib Steinman in his Yeshiva. (...at least according to Circus Tent. I will be happy to be proven wrong.) Rav Schechter apparently said very little about it (available in a brief recording there)." -Harry Moraless

Anonymous Anonymous said...
Good response in return of this query with real arguments and telling all about that.

H: "They're bringing all the Mechablim in America"

are you deft, dumb, and blind?

¶ More women than ever are joining Israeli army combat units. A new mixed battalion is taking shape. But problems remain, with hundreds of sexual assaults reported each year, and some refusing to accept women''s ability to fight alongside men.

So what's he playing at? Acting the biggest armchair kannoi for fun?

mush: "Schechter never met RSA in his life. Never spoke two words for him. And he is making it like he was the manhig of yeshivos." What a farce.

Did Rav Shach ever meet the SR?

your loss maybe someones gain.. don't pain over it so much, at least don't show it.