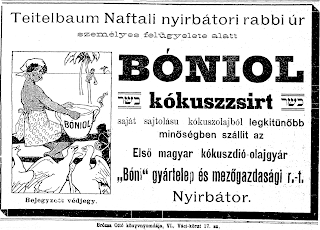 Looks like back then they weren't so concerned with 1) the content of the advertisement, and 2) That things be more than כשר. No mehadrin or Mehadrin min haMehadrin. Just plain כשר. You want something more than that make it yourself. Or maybe there was no חשש of hirhur in this case? Then again maybe this newspaper was like in the 5TJT or Jewish Week or Forward equivalent, a place that had more lax standards. Tough to know what they were thinking back then. But who knew that they mass produced stuff back in Europe!
Posted by Hirshel Tzig - הירשל ציג at 11:57 AM

Nice! Your on a roll today.

Hirshel
In the teshuvas Divrie Yoel, there is a interesting answer for his cousin the Nirbater ruv, if you can rely on kulos of Hefsed Meruba for the factory , when its mass produced, but would not be Hefsed Meruba for the individual consumer..
Saw it years ago..
Maybe it was for this product