The Rosh Yehiva Reb Hillel Zaks recalls a story that happened in BMG. An elderly Rov who he does not name here, spoke in BMG in front of RAK and said that Reb Yisroel Salanter said if I would've met the גר"א I would've rebuked him for keeping to himself and not going out to teach the masses and be משפיע on them. Reb Aron got very upset and grasped his shtender with all his might to keep himself from lashing out at the Rov. He later told Rabbi Zaks I would've stopped him if not for his stature and reputation. So were RYS' words not correct? Or was the problem the audience he was repeating the story to? Maybe he didn't believe the story? Well, he explains it in the second paragraph.
.. . 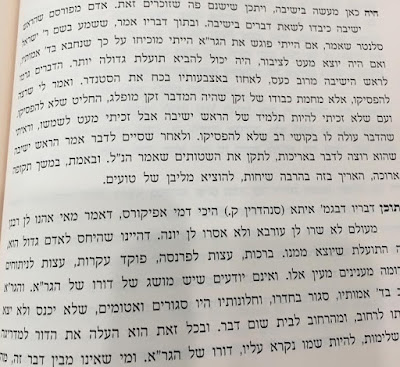 more commonly known is that supposedly the dubno maggid told the gaon its not a kuntz to sit locked up in your room and be the vilna gaon (it is) and the gaon replied, ich bin nit kan kuntzin macher.

I did read it but I forgot what's that all about when I realized I finished reading, maybe it's me so I'll read it iguess sometimes again, out of the respect of the what's happening squad.

he said: "He later told Rabbi Zaks I would've stopped him if not for his stature and reputation"

Fascinating.
Any idea who was the guest speaker?

Great story and interpretation. From which Sefer?
Inna East

good story.
Worth noting ,the source R'Zaks was an arch misnagid

everyone in Lakewood knows who the speaker was. it is common knowledge but i guess he did not want to print it.

It is well known and Rabbi Zaks said this story in Lakewood with the name.

The question in this post is foolish. RAK knew his talmidim and he knew that sending them out before they were ripe for it, is asking for trouble. He was following in the footsteps of previous gedolim who were staunchly against Novardhok for their actions. As Reb Elchonon Wasserman said 'eichus can lead to kamus, the opposite never happened'.

The Chazon Ish would say "imagine the CC would have left the daled amos shel halocho at a younger age. He would never have reached the influence he ended up having."

Sending out bochurim and young yungeleit on kiruv is, at best, the most inefficient way of doing things

RAK did not want the talmidim to make the mistake of leaving too early.

I don't see his quote so outrageous that he should of would of interrupted him and embarrasses this Rabbi for it.

"they do condemn the land uber alles fringe.. many MO read al hageulah in the bathroom. i was machmir not to use it for toilet paper. his interpretation of ramban was disgusting. truly the result of his inability to rationalize his escape via the Zionists. a talmid chacham - sure; evil - for sure."


"His treasured ancient "Tikkun Korim" that had belonged to Rebbe Mordechai of Nadvorna, a tzaddik and miracle worker who passed away in 1894, and was from Silk’s grandfather’s ancestral town.

Using the precious sefer for the ceremony indeed captured what Moyshe Silk — the first chassidic Jew in a US Administration senior slot — is all about: a brilliant attorney and international negotiator equally comfortable as a chavrusa with his rebbe (Rav Shlomo Leifer, the Nadvorna Rebbe of Boro Park) as he is walking the halls of the White House

Delta Is The Latest Airline To Improve Seating From JFK To Tel Aviv.

"Delta, which had been first to Tel Aviv with "direct aisle access seating", realized that they were falling behind in the arms race for the Tel Aviv route with their regular herringbone style seating."

"BMG is certainly doing something right. About 5% of its graduates become rabbis, and many become educators. But most of its alumni enter secular professions and do well there. They also "regularly gain admission to Ivy League graduate schools". I guess the admissions officers at Harvard, Columbia and Penn know something that the ACLU doesn’t about a BMG education."

Beth Medrash Govoha, or BMG as it’s known locally, is licensed by the state to confer bachelor’s and master’s degrees in the study of the Talmud (to be used as college credits!)

"The projects, many of which are shovel-ready, include cutting edge research laboratories, the latest computerized classrooms, and cyber networks that will allow students and faculty to interact with colleagues around the world through long-overdue construction, maintenance and attention to the State’s higher education community."

Governor's press release in which the grants were announced:

"Today, we begin a new era of opportunity for New Jersey’s colleges and universities,” Governor Christie said. “To keep more of our best students in the State and to make our colleges more attractive research partners for industries looking to bring good paying jobs and businesses here, we need modern facilities to remain competitive.”