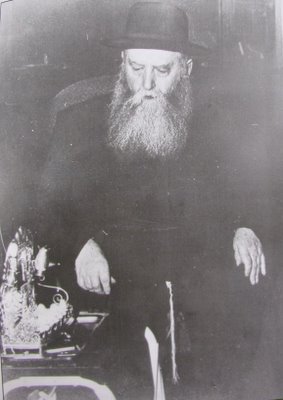 First some housekeeping. I like your blog. It is tasteful, informative, and thought provoking (kind of like your menayreh). It is pretty annoying that the comments open in a seperate window, did you know that you could set them to upen right on the blog page. That would be easier to navigate. I am a not "a lubavitcher" but I recently wrote a letter to the Igros and got an amazingly relavant response. What do you think about those kind of things?

Thanks for your thoughtful words re: the blog. It's people like you that make it rewarding for me to write.

May I ask where you heard about this method of contacting the Rebbe?

I know I can change the comments opening in a separate window, for some reason I like it this way.

Hey Duvie, ever tried the Book Of Mormon? You get awesome answers.

enlighten us oh brave anonymous, what does the Book of Mormon say?

I am connected to Chabad for years (dating back to high school when I visited the local Chabad house for a much needed break from the Kalte Snag environment) and now I daven shabbos in a Nusach Ari minyan near my house. I have some very big decisions to make that are weighing me down, and at the Yud Tes Kislev farbrengen, I was talking to a friend (recently moved from crown heights) how the Rebbe might of advised me. he told me that some people communicate through Igros. I was skeptical, but opened a book right then and there, and found nothing relevant. A real snag would've given up then and there, but i wanted to connect with the Rebbe. So the next time I was really down about my matziv, I went to the mikveh and sat down to write my thoughts out (to G-d) and had in mind that maybe He will send me an answer through the Rebbe. Akitzer, I put the letter in Igros, and found a very positive response about "M'tracht Gut Vet Zein Gut." There's more, but I dont want to usurp your blog.

I hope you don't mind me putting your comments here, rather than starting again at another post.

Duvie:Are you another depressed young man caught up in the Lubavitch net to be eventually used and abused ?
If you are already into the 'igros' malarkey you are one step away from joining those moshichist/elokisten.Caveat emptor!
If I may add the Rebbe advised people to discuss problems with 'yedidim mevinim' you will do far better following that advice.
I honestly wish you the best, but have seen to much of the Lubavitch penchant to snare people who are in distress.I don't mean this in a hateful way.

I think we should measure the importance of each chassiduth by its rebbe's menorah Thats why Munkatch is the most important chasidic group in the US today ...

tzig how about a post on the origin of the lubavitch haneiros halolu?

I know that it was created by the Mitteler Rebbe's Kapelye so that the Rebbe, who was ill and didn't come out to the Oilem, would sit till the end of Haneiros Hallolu which he did. Hence the long tune.

It was the Rebbe Rashab

It was first sung by TOMCHIE TEMIMIM bochurim, in front of teh Rebbe Rashab,
ah freilichin chanukah

you repeat yourself? can you disprove what I said, or prove what you did?

"A colorful, lively Chanukah composition with symphonic overtones. It was first sung by the students of the Lubavitcher Yeshiva in town of Lubavitch, Russia, nearly a century ago. Even to this day, Haneiros Halolu ignites the Chanukah spirit in thousands of homes around the world, as the family gathers around the flickering flames."

Sorry to do this to you friend, but emes iz emes, LAJew was right.

don't sweat it, I've been wrong before. Sorry LAJew.

LAJew I don't think it was the Rebbe himself though that composed it.

I did not say that, I wrote
"It was the Rebbe Rashab"
Meaning it was in the time of the Rebbe Rashab
anyways,,,,,
it does not make really any differnce because they (the holy rebbes) are all memelah mokem from one another

It was actually the Rebbe Maharash, i believe.

" Kurenitzer said...
I think we should measure the importance of each chassiduth by its rebbe's menorah Thats why Munkatch is the most important chasidic group in the US today ..."

You should see the size of the Boyaner's...