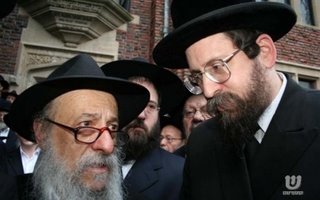 Not that it matters any, but I've always admired the Boyaner Rebbe for his shunning of most Rebbishe "shtick", for lack of a better term. I remember him as a younger man, already as Rebbe for a long time, coming to Shul in Flatbush and davening with all the others like a regular guy. He would come to NY to visit and spend time with his parents and he would come ALONE. WITH NOBODY ELSE. If you'd see him on the street you'd think "he was one of the guys." In today's day and age, where young Rebbes arrive with "posses" and "entourages" at every Simcha they attend, that's refreshing. There's much more to be said about him, but as far as I'm concerned that's enough.

Last night Reb Nosson Gurary from Buffalo, Zalmen's son, married off a child. His cousin the Boyaner Rebbe came to the Chasunah and was given ברכה אחריתא, a very nice gesture all around. Families sticking together is always nice, especially at Simchas.

This may have been his first visit to CH, although he did send his son to the Rebbe before his Bar Mitzvah. Better late than never.

finally some interesting posts.
No offense meant on the contrary. vedal.

The Boyaner rebbe's father is Dr. Menachem Brayer who was a professor at Yeshiva College for many years. He married the only daighter of the late Boyaner rebbe of the Lower east Side. The rebbe also has 2 sons Isaac and Reb Israel who are in the category of Modern Orthodox lay people. Israel has the personality, appearance and temper of a rebbe.It's too bad he was not interested in the position. He would have met a fine rebbe in the US.Reb Israel was the son in law of the rabbi Joseph Lookstein.
Some Boyaner Chassidim I knew rejected the new rebbe when he first assumed leadership and turned to the Bhusher rebbe of Tel Aviv for leadership. The Bhusher was really the last Rizhiner rebbe who had the unbroken Massorah of Rizhin. He was a most unusual man .

Nosson's wife passed away a few weeks ago

Kurenitzer, do you know the current Boyaner Rebbe? What kind of person is he?

Can you elaborate about what was so unusual re the Bhusher ?

I spent about ten minutes with the boyaner rebbe 8 years ago. I told him where i was from and he said something like, 'yeah?, my brother is an areospace engineer at Rockwell in your hometown!' The persona projected didn't take any effort...he didn't project anything at the time...he was a very regular, unassuming guy, nice, not what you expect for a rebbe.....At the time I didn't know who he was really and went to see him with a friend by fluke. After the visit I figured that the reason I came to see the boyaner rebbe was to help mekarev his engineer brother!

kurenitzer, nowadays the only rizhiner rebbe who is rebbe acher rebbe is the sadigura rebbe of bne brak ( until recently of tel aviv).

The current Sadigurer rebbe is Takeh ben acher ben, and is a erliche Yid, but he does not carry the complete Messorah as for years he led a more modern lifestyle too.His son in London is striving to be a complete Charedi- Hungarian style. Again a fine person but under pressure from the new Charedi realities to conform.The young Bhusher has undergone a complete magyar conversion, no tie and new frumkayt.
I never met the new Kopishnitzer but he sounds like a nice person with a lot of Massorah. Fially there is the Vasluier rebbe too.

The old Bhusher was a independent spirit. He was a Mizrachi. He like the old Talner stil practiced old Russische Chasidische tenuoos and minhogim.There is a little book about the Old Bhusher's last trip to Russia and Rumania , its not censored. Its wonderful to listen to all the gleich vertlech and stories about other rebbes etc he tells.
He was also a poel yeshuoth.
He was not a CEO, CFo, rosh yeshiva , rav types of rebbe . He was a rebbe because he had the training to be a rebbe ahvas israel, Avoda caring etc. somaech bechelko.He was atrue heir to Rizhin and the Maggid. Liked the Tel Aviv people rather than the nai Brak crowd.

Kurenitzer, I fully agree to what you say. I only wanted to point out, that the Sadigurer is the only Rizhiner Rebbe today going straight back rebbe acher rebbe to the maggid.

I wish the Boyaner rebbe was living in the US. I think he could be a posative influence on the Chasidic community in the USA.
I also understnad that the Sadigerer rebbe shlita needs a refuah shleima, and that all ready his huif is involved in machlokes.

The Kopishinizter Rebbe is very much on the style of Ruzhin of years ago. He is an expert in Minhagim, Torahs, history and Yichus. He was very closely connected to a lot of previous tzaddikim and chassidim and is highly respected by Rebbes and Rabbonim. THe Ruzhiners Rebbe according to my understanding all live together very peacfully.

This generation is lucky to have people like the Boyaner and Kopishnitzer Rebbes Shlita, they are true tzaddikim and rodphei shalom

The current Bohusher Rebbe Shlit"a is also a Ben Acher Ben as his father Z"L who was niftar last week would have been the Pashkaner Rebbe had he wanted to. He chose not to be a Rebbe but was the son of the previous Pashkaner Rebbe who is ben achar ben from the Hailiger Rhizhner. The Chortkover Rav of BAntwerp and his brother the Chortkover Rav of manchester are also Bonim Achar Bonim of the Hailiger Rhizhner.
The is not the first visit of the Boyaner Rebbe Shlit'a to Crown Heights, he was there as recently as last year for another Gurary cousin wedding , the son in law of Zalman, whose last name is Sternberg (from a Boyaner family, the son R' Mordechai Shternberg A"H from Lud ) married off a child.