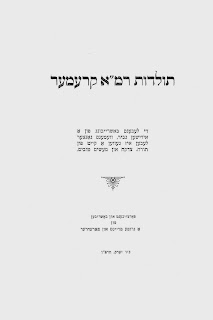 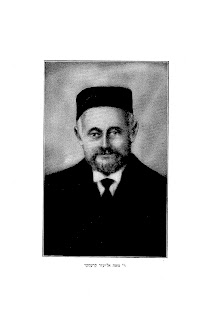 Read his biography here
On page 36 - זייט זעקס און דרייסיג, rather - we read about a siyum haShas made by RMAK shortly before his passing in 1926. What is noteworthy about the siyum is that RMAK wasn't privileged to learn much back in der alter heim, but once he moved to America and established himself financially- is when he began to sit and learn in a serious way. At that occasion the author Yaakov Mark - who we quoted here many years ago - was invited to speak at the grand siyum and suggested that the members of the Tzemach Tzedek Nusach hoAri shul on Henry Street make a chalukas haShas themselves and finish it in time for Yud Tes Kislev! Unfortunately RMAK passed away a short time later and for fear that maybe some people would forget to finish their mesechta they published it in his biography which was published shortly after his passing. Most of us will recognize Reb Dovid Shifrin in the list of lomdim, but the other names mostly not.

alles is Gut und fien
but why a Lamdan

In the beginning of the bio - M. Lokshin may possibly be familiar, as well as Mr. Fasten - apparently referring to Calev Fasten who hosted the Rayatz in Lakewood, or at least a relative of his.

even if he was named after the Liadier, Liadi was long gone by then. He was a chossid of the FR of Lubavitch and did all he could to help him.

reb hirshel, any thoughts on the new rebbe bios?

you want all thoughts on all books???

Was that rhetorical, I was just asking for some commentary, whatever you think is necessary, whichever one's you have read...

@Ht
nu, takeh.
(did you see this article by a shliach in cali?

plz excuse that its on chabaninfo. :)

I have read a few pages from Miller's book that were linked one one website. That's it. Have u read any of them? Care to share your thoughts and impressions?

Sure, i've read steinsaltz, some chapters are very very intersant, with lots of details and points on the Rebbe's views of certain issues, while other chapters are artscrollish, all in all not a bad book, and Steinsaltz always makes a note when he brings his own opinion. an interesting book from an interesting chasid.