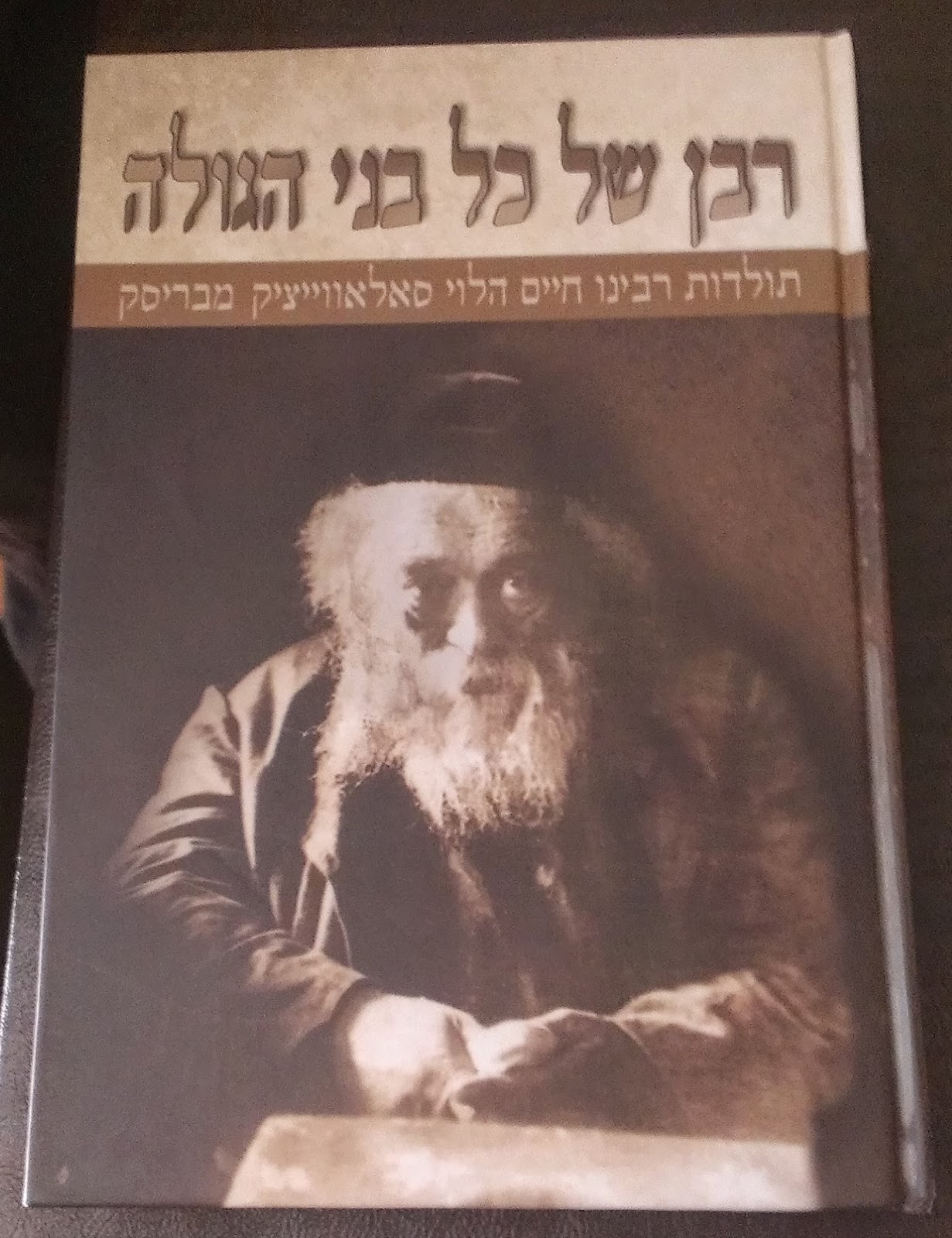 I don't know אדון מלר, I've never met him. As you can see his latest work is on Reb Chaim Brisker. I borrowed this book for a few days, until he owner finishes his thousands of other new books and gets around to reading this. Lots of nice pictures, many of them thanks to the world wide web and frum forums. Lots of agenda too, in this case wannabe קנאות like in his other Brisker books. Like he'll quote extensively from Reb Meir Berlin (Bar-Ilan) but never by name. Just בנו הצעיר של הנצי"ב זצ"ל. Reb Yoshe Ber from Boston is respected, but mostly in the footnotes, not in the פנים. Reb Yehuda Leib Don-Yichye, the Chabadsker Mizroch'nik who has a talmid of RCS in Volozhin is just all the other great talmidim, quoted extensively despite his Zionist sympathies. What am I saying "sympathies?" he was a full-fledged Tziyoni! So go figure! Like most other biographies published these days, many, many pages are devoted to the "times" of the protagonist. In this case there's tons of material on the Volozhiner Yeshiva, of which Reb Chaim was a part of for several years and where he taught his new derech haLimud.

So there's biography and there's dissection of character, or whatever that's called. Basically the author deciding on a topic and then deciding how Reb Chaim fits into that mold. For some reason there was a need for the author to tell us how both the Beis HaLevi, RCS and the BR all needed to hit their children in order for them to keep on learning and chazzering all the time from a very young age. And how the Rov supposedly condoned that behavior, referring to himself and saying "We obviously see that it worked!" Other than prove to those that say that the extreme hanhogos and shiurim stem from נערווען.... what does that add to the story? Reb Aron Leib Steinman, the more liberal יליד בריסק, doesn't buy all the hitting in the chinuch and he says that the only time that the BR got petsh from his father was when he disrespected his zeide Reb Refoel Shapira as a young lad of 13 at his Bar Mitzvah pshetl. Which is more in line with "normal" chinuch, especially of children of Rabbonim who had good heads and took to learning from a very young age. But we all know what the Briskers think of RALS. "Real" Brisker chinuch includes a good dose of petsh! But I will say this much for Meller: He manages to make all others and their mesorah of derech haLimud totally inferior to Reb Chaim and Brisk! As if until they חלילה almost wasted their time on pilpul and sevoros.... 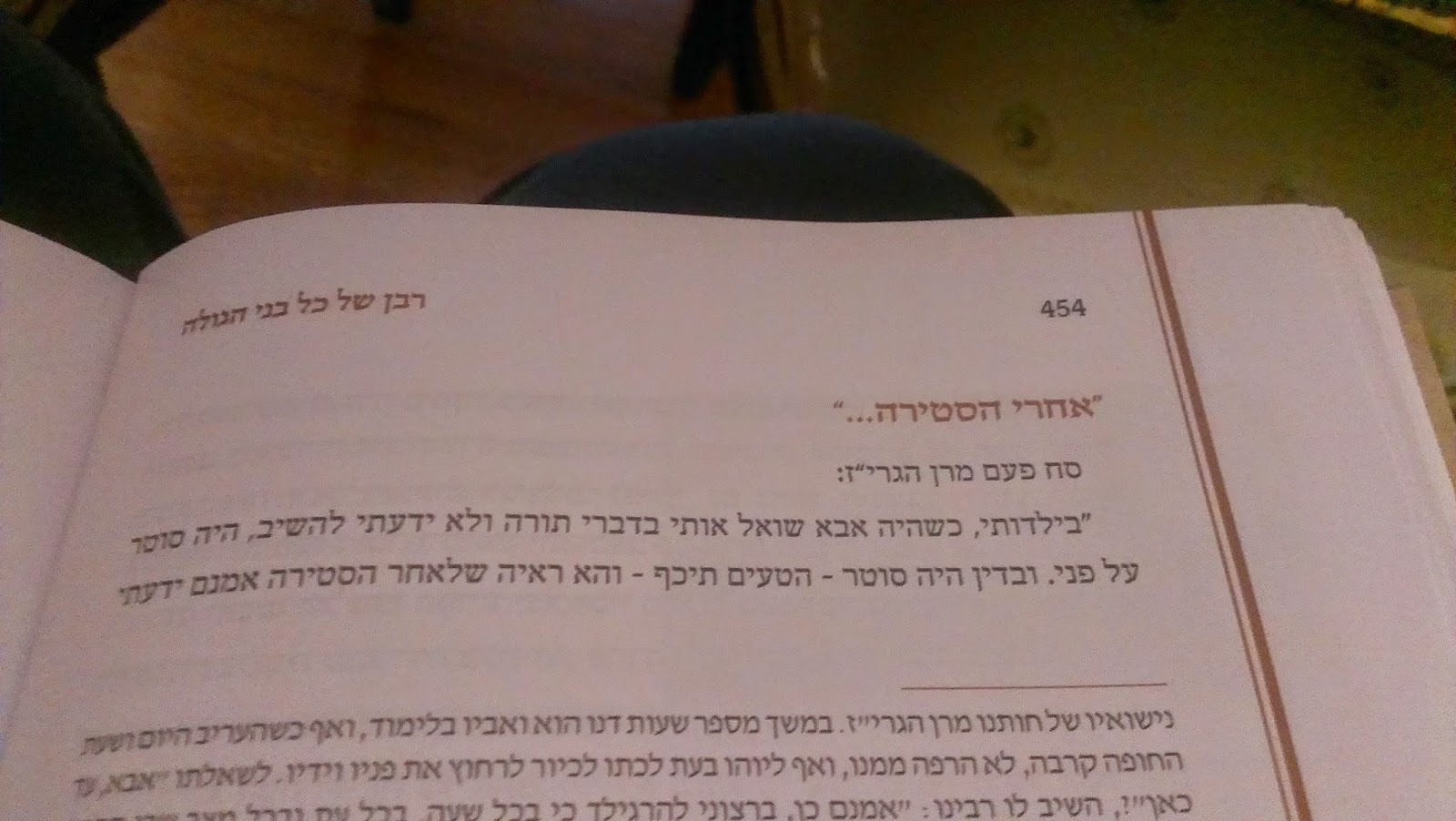 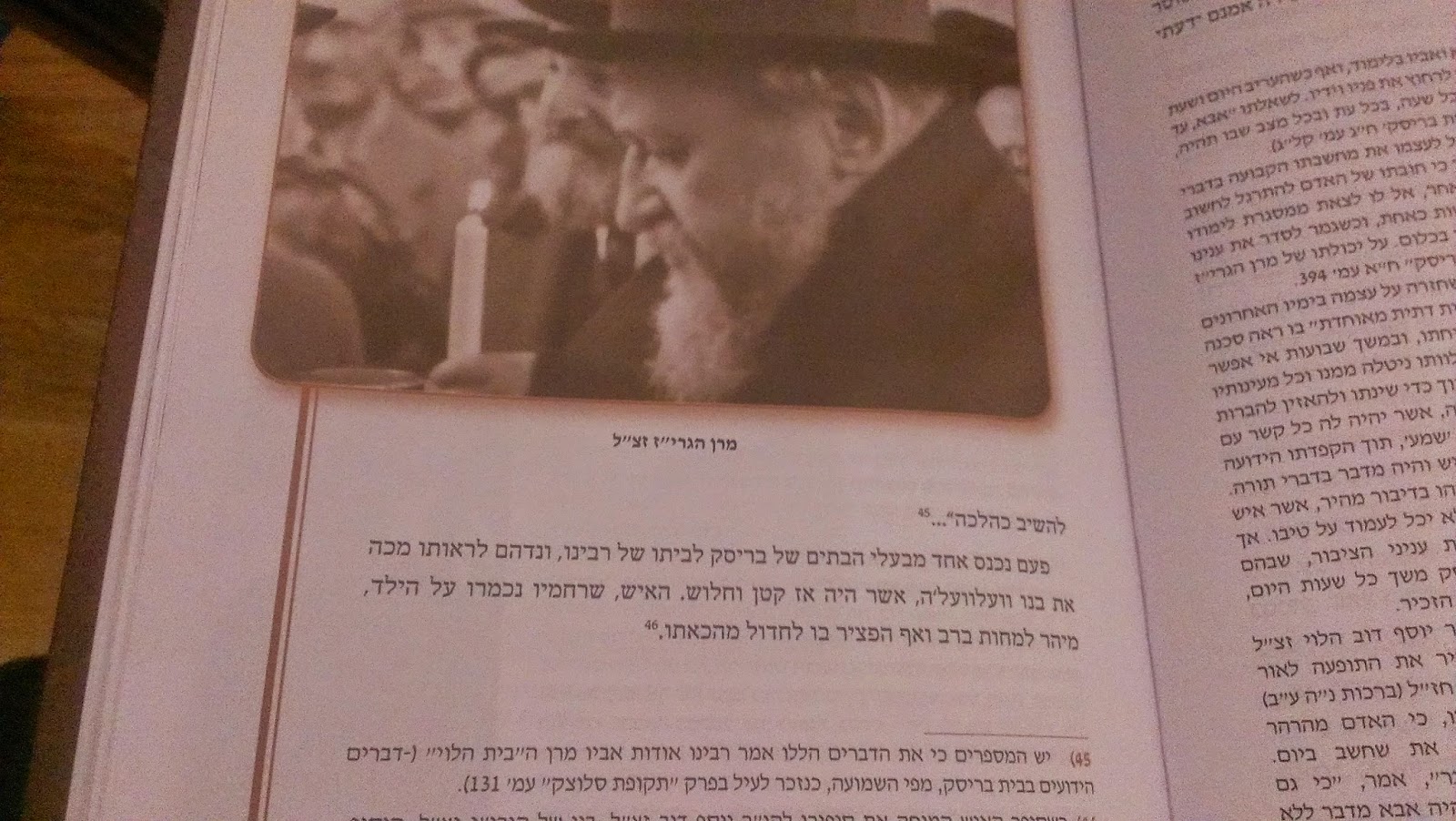 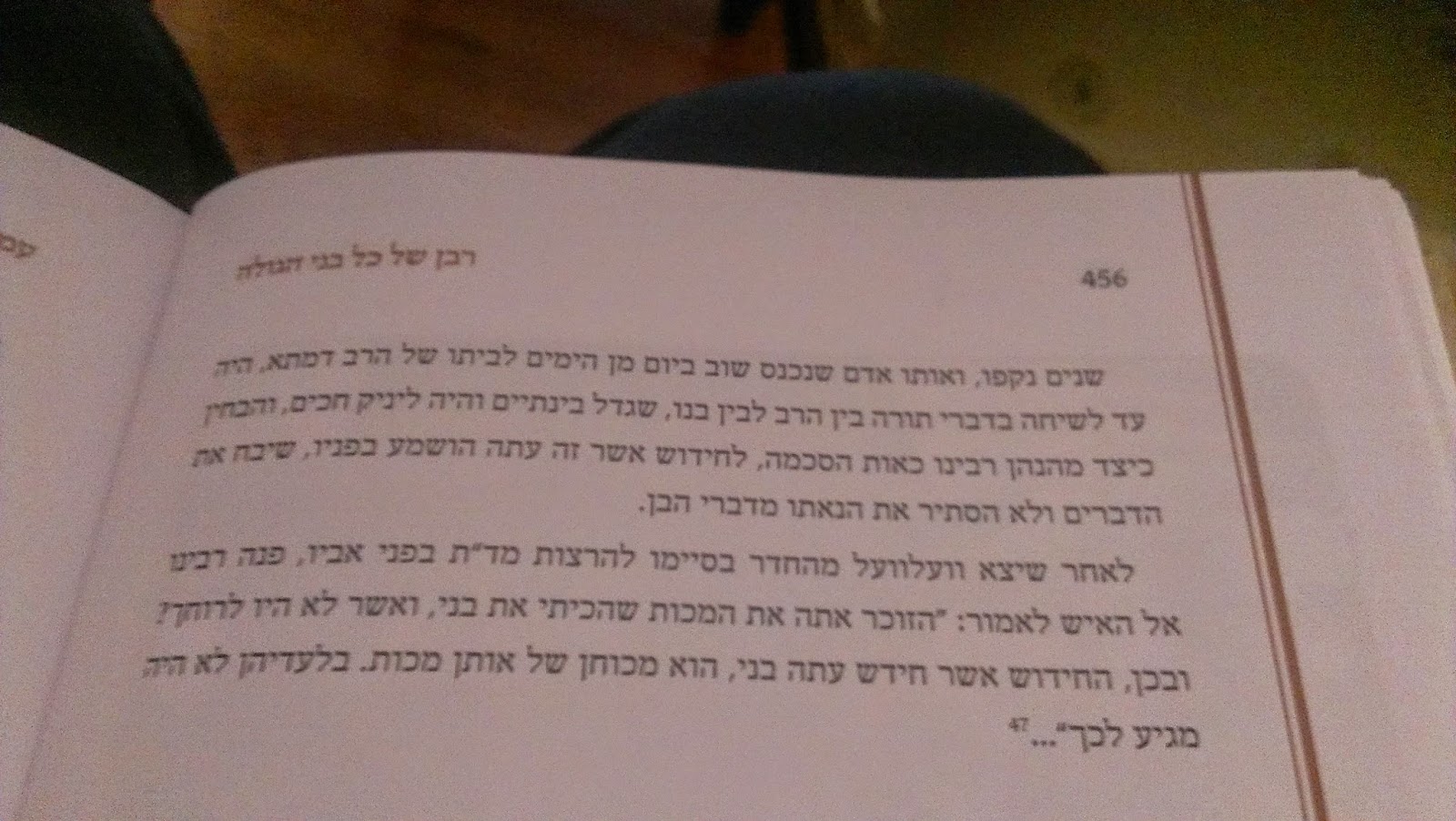 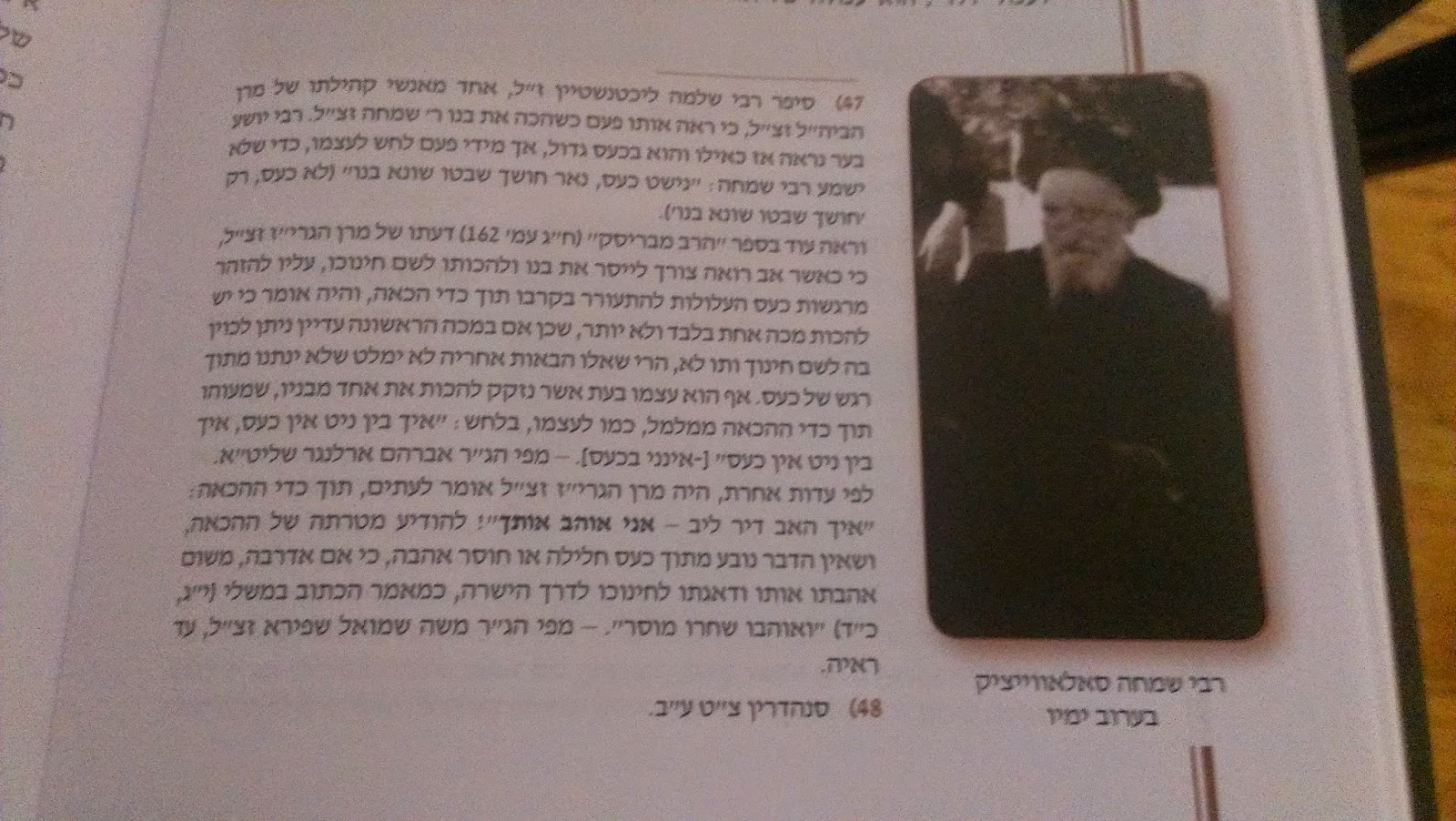 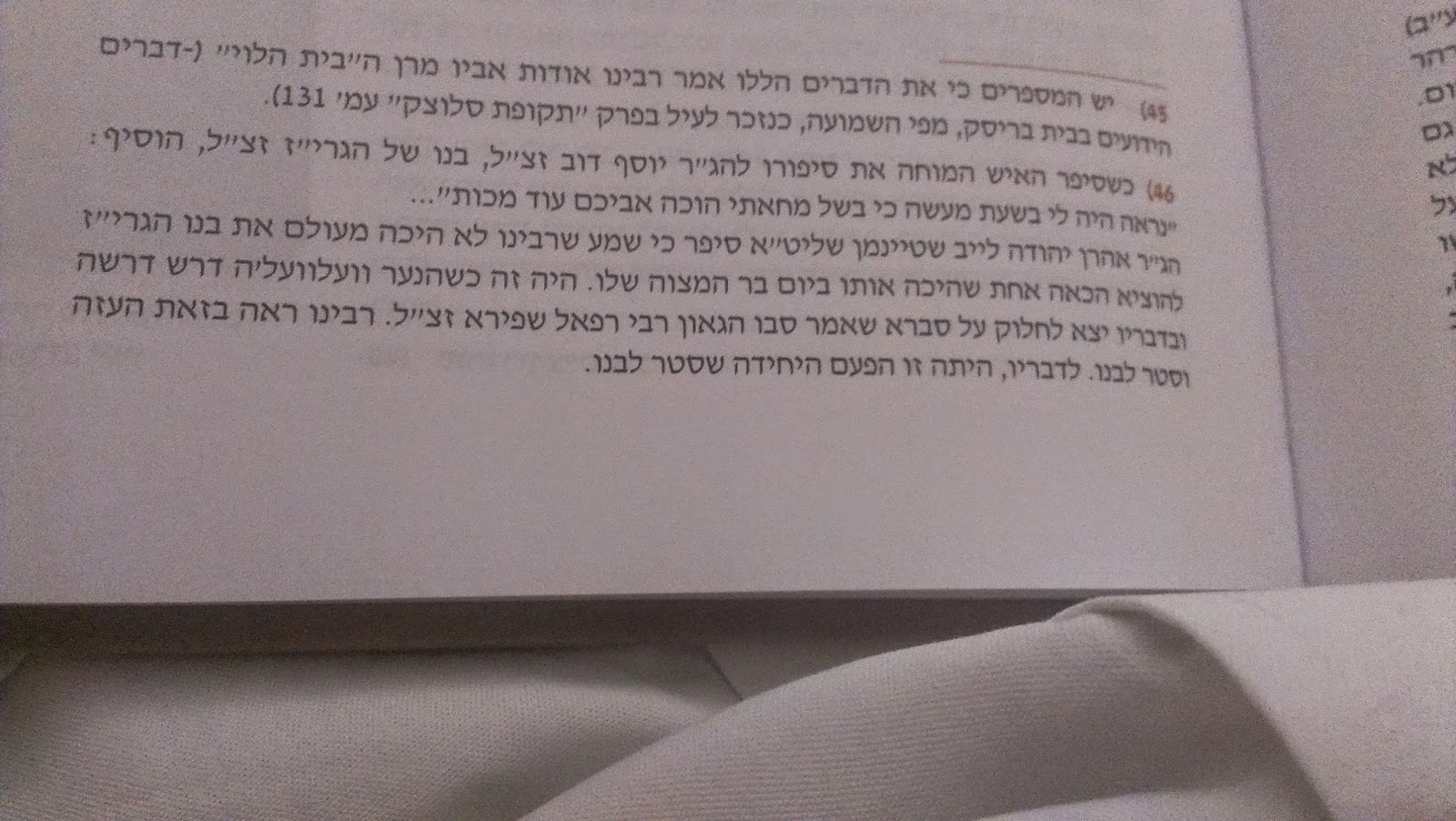 "Reb Yehuda Leib Don-Yichye, the Chabadsker Mizroch'nik who has a talmid of RCS in Volozhin is just all the other great talmidim, quoted extensively despite his Zionist sympathies. What am I saying "sympathies?" he was a full-fledged Tziyoni! So go figure! "

The answer of course is simple. His audience will get upset at a quote from the liberal JB or Meir Bar Ilan (who saved the BR by getting him a visa to EY). They have no idea who Reb Yehuda Leib Don-Yichye is. So it only makes him look better and more scholarly by quoting a semi obscure figure.

your writing lots of mixed up non organized thoughts in the form of mishkibable tzig. Its obvious in your hasbara that you never learned in Brisk.
You should quote sources too. like what you said bout RALS...etc.

Stop belittling books that have good pictures. A picture is worth a thousand words. He should have just spared us the thousands of words.

all that's obvious is that I write in spurts, not a one-time sit down, and that I have no editor. That sometimes leaves posts looking a bit sloppy. I'll be the first to admit it. Other than that?

My source for the RALS quote is my years on G-d's green earth, and RAYS' Chumash Rashi shiurim. I cannot quote a certain tape or sefer.

Off The Brisker derech said...

hirshel
shimi Meler is a Talmid Muvhak of Reb Duved, and it is all approved by his Rebbe
Its my assumption that the buck stops at Reb Duveds desk for blame or fame.
Rumor has it that AJ was against the printing of all the Shimi Melers works,Seforim Shai Lemorai,and biographies. It left AJ with no AUTHENTIC sipurim of bais brisk, all is open.
what do we care on this family feuds..Midoth is not in their Mesorah....they have a loimdois for that too

Tzigy, Wow times have changed!!! back in the old days when there was real action going on here, when the post' weren't just links and pastes, but red meat "articles" every couple of days, you would never admit to any fallacy on your part! Maybe all that chasidus is working its magic.
as far as you quoting RALS bout the BR not getting petch. sorry, you "being on G-ds green earth" is not a very good "source". Any Brisker would laugh you out of town with such raid. Il take Reb AY's chumash shiur as a way more reliable source. Hey Il even take Meller's book as more reliable....then your "green earth".

I think this was a very interesting article, idk why people are complaining,

thank you, Efraim. Tell us what you liked, please.

back then in the little hut village of belz known for its muddy dirt road - they dad no idea what on earth Brisk was, if is a person place or thing.

I think they still don't.

Supposedly rays and the belzer once met. The conversation went along the lines of aj asking the br what he does, he replied he has a shul. Ray replied oh the shtible on agripas?

The br asked ray what he does, he said he has a yeshiva called brisk to which the br replied, heist dus dayn zaide iz geven ruv in a shtut vus hayst brisk..

That might be "part" of the reason. But the main reason there is no action is because in the old days you wrote more. Maybe you were more into it then. It was new, and you wrote. there was real juicy schoira going on here. The oilam was going at it. Heavy blows, and the dirty fighters with they're teeth and nails. the chabadskers, the snags, the historians, the apikorsim, the hockers, etc. etc. You were involved in the comments, fielding the raid. There was allot of razor sharp tongues here. tons of krumer hashkafos. peoples blood boiled and they had to farenfer, and that's the way it went.
But then you got old and bored and tired of it. And there's allot of repasting articles, links, and of course Rabbi Teitz, (which is a huge hit). Every once in a while you scrape together an article (thats written in spurts), but what could I say, its just not the same. I pop by once in a while but often you don't put anything up for days or even weeks sometimes.
Maybe its a sign of good things, that your into more important things than blogging. I can hear you on that....

whatever the reason, we APPRECIATE you taking the time to make yourself heard in such a clear and eloquent manner! THANKS!

Great! Happy to hear that its unanimous.

Beating up kids is where Kashau and Brisk meet

It seems to work for brisk. Despite the tough chinuch all of the Griz's descendants are shtarker Briskers! Nobody rebelled against the system!