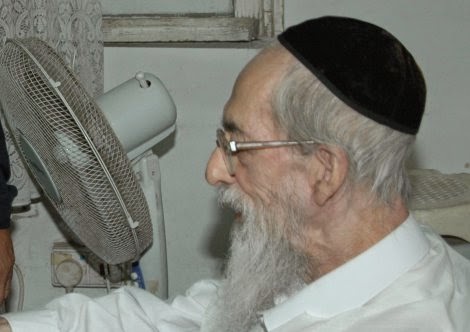 So Part I was in Yiddish. Today I'll do English. Just because. לא בא לי לכתוב באידיש היום.

I have no beefs with Reb YY Kalmanovitch. They say he checks his tefillin every day, every inch of the retzuos, to make sure that they're mamesh black. That he davens for hours till literally klois haNefesh. That he learns until he physically can't anymore. 20 hours a day. Friends of mine have told me that chas vesholom to speak ill of him. Which is good, because I do not intend to. What I write here is not to attack the messenger. כי מי אני ומה אני, עפר רימה ותולעה. b'etzem, what's left for me to say? A man who apparently - based on what people tell me - has no shaychus to the real world spoke up last week and said that 1) we cannot be mispalel for the success of the IDF. And 2) That it's better for these soldiers who are sinners to die in combat al kiddush hashem rather than returning to their sinful lives and to die a natural death. And he has proof for everything he says! גיי טענה זיך מיט אזא איינער. So what's behind people who spend their time engrossed in Torah and prayer having such feelings and preaching such ideology? I have a theory. ברשות הקל החונן דעת. Hear me out please.

The common denominator is the fact that they were born in the United States and later on went up to the Holy Land, where they came in contact with "real" Jews, not the American diluted Jew. Yet, in Israel they each went their own extreme way. Hirsch married Katznellenbogen from NK and fell in love with Yasser Arafat. His kids follow in his ways - somehow the meshugoyim always manage to perpetuate the meshigas. And the latter two became quasi-independent tzaddikim in the greater Litvish/Bnei Torah world, with extreme views, even more than the Brisker Rov and Chazon Ish. What they lack is proper hadrochoh. They get to the Holy Land and they acquire an acute form of Jerusalem Syndrome. They fall in the love with the zealots, thinking that this must be the right and proper way, since everything they do is old-fashioned, so how they think must also be authentic! They become their own guiding lights, they accept no מרות. In essence it's like a Baal Tshuvah  (no offense) or a newcomer to a certain chassidus; if he does everything just by the book, but without consulting those that have a little seniority on him, האט עס אזא פנים.  You can sit all day and look up reasons to divide Jews and build walls. You'll probably find many such quotes and "proofs." But you'll be wrong. That doesn't mean that you don't supervise who your children are friendly with, but you don't become a professional מקטרג either. Especially not בשעה שהשטן מרקד בינינו and Jewish blood is being spilled. In other words timing is everything. And this is not to absolve myself from learning and davening, but what good is the learning and the davening if it doesn't bring to Ahavas Yisroel? 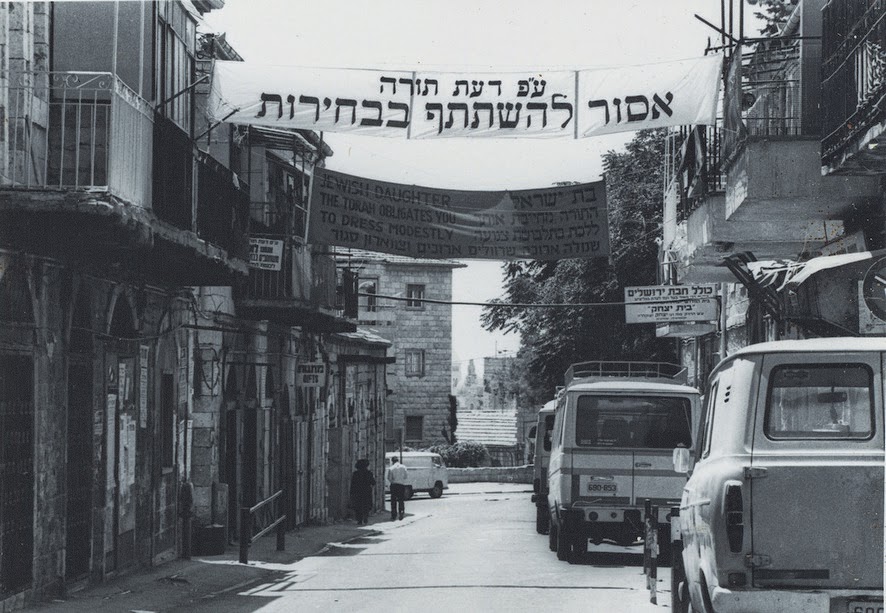 R' YE Weintraub was a talmid of Rav Shach zt"l. To the best of my knowledge.

What you write is logical, but considering that Rav Kalmanovich was the son of Reb Avrohom ztz"l, it is a little hard to think that he thought of himself as a simple American - didn't he have any mesorah from his father?

before he was a Chaim Berliner, you mean?

From when he came to EY.

this is really dumb.
They had as hadracha like the Great Rebbe of Chabad. The tayna against the Rebbe was also that he had no hadracha.

why is the sheva mitzvos for goyim better than Hirsh's shtusim? both were never done, and we can find sources for both

Wientraub was a Chaim Berliner,
he arrived to Benai Berak from the USA,started lecturing Kabala laced with Chabad and Maharal, Maran Avi Ezri did not like it, he started a to murmur about Wientraub thats not our derech etc..
In order to tame the lions appetite, Wientraub made a decision, I will help you on your anti chabad jihad and we stay friends.
That his the story of the big tzadik Haodoir Wientraub.

tsvi moshe shaul said...
"why is the sheva mitzvos for goyim better than Hirsh's shtusim? both were never done, and we can find sources for both"
I am waiting for this question to be asked,
the seven nohaide laws are in Rambam hilchas melochim lehalocha,for our day and time.
Show me 1 sefer halocha where all the Shita of Satmar,Blau Hirsh is quoted.
Btw,
was Hirshes money from Arafat (a gilgul of Hitler) a payment or a gift.
is there koach hapoel benifal on that arch murderers money too?
Maybe Hirsch got his tendency for Retzicha from the PLO money.
think about it

tsvi moshe shaul said...
this is really dumb.
They had as hadracha like the Great Rebbe of Chabad.
The Rebbe of chabad was Butel Umevital for a Rebbe for almost 7 decades.
And before his shver he had a role model a Father a Goan olem a Tzadik Yesoid Oilem.
I dont know in history great people that were so Butel to a rebbe as Rebinie Hakodash baal Likutie Sichos

@nati you have a great imagination

Was it his father or shver that desired that he go to university?

Moshe Lieb Deutsch; the tzig said sources are not enough, so the source in the Rambam doesn't suffice

Who is Rav Kalmanowitz a talmid of? Where has he spent the last 40 / 50 years? I know by a shtender with a Gemora, but in which circles?

Nati, I looked in the Rambam and I did not find anything about arvus for a ben noach. Maybe I missed it, could you enlighten me where it says we have achrayus for them keeping their mitzvos or that it is in any way a good thing to assist them in doing so? And why do you stop at 7 decades? He was botul to him for 47 decades. Last I checked he was not 70 when his shver died and deciding on his own what his shver would have done is pretty much what Rabbi Weintraub did to the Brisker Rov etc.

Who determines right and wrong?

@Yankel and the haters --

See here for a 3-volume encyclopedia on the subject, replete with leading haskomos. I admittedly haven't read it thoroughly but you will surely find there mekoros for all you ask about. Tzei ulmad, and then come back..

ben elezer; the tzig said that sources for things that were never done are futile. You cant just follow the book.

you missed the tzigs point.

we're not talking about new things here. We're talking a hashkofoh that goes against the grain of Yiddishkeit!

if something is in the book, then its not against the grain of yiddishkeit

his father was a shtikkle kanoi, speaking at demonstrations. But nothing like this! And how long since he's been with his father? and what do we know about his relationship with him?

Yankel
"Nati, I looked in the Rambam and I did not find anything about arvus for a ben noach. Maybe I missed it, could you enlighten me where it says we have achrayus for them keeping their mitzvos or that it is in any way a good thing to assist them in doing so? And why do you stop at 7 decades?"
its Rambam hilchas melochim perek 8

Yankel
"And why do you stop at 7 decades?"
from when he became a Son in law, till the day he passed away

Yankel
" Last I checked he was not 70 when his shver died and deciding on his own what his shver would have done is pretty much what Rabbi Weintraub did to the Brisker Rov etc."
there are some stuff that he did on his own,
but Hafotzas yahadus, Hafotzas chasidus Ahavas Yisroel for every Jew was his Father in Laws life.
almost like brisker ruv and Hiechel shloma

It's really unfair that you are equating on any level Moishe Hirsch with the other two. You are obviously biased due to R' Elya Weintraub was a misnaged. Rav Kalmanowitz hangs out in Satmar Bnei Brak all day but he might also be anti-Chabad. (His brother & shvogger grada did not kick out the Lubavitcher bochurim who came to speak in learning in Mir Brooklyn when other yeshivos did kick them out)

when Hirsh died his kids were saying that he was a real talmid chochom, that he had smicha from Reb Lazer Yudel of Mir, etc.

But you're quite right. He wasn't on their level. I was just using him to make a point.

for $175 an hour you'll get my professional analysis, Dovy. ok?

the same analaysis could be said about the more extreme elements in chabad like the meshichists.
btw, r'eleh weintraub apparently hung around chabad as a young bochur or maybe even learned in lubavitch for a short while (not sure but heard something like that)

You left out r rumpler( from england) who supports the shawl ladies and the bneo brak gangster d shimdl... Shimdel has alredy stopped fighting on goliovachik but r rumpler fights on.

Rumpler isa gypsy looking for attention. He is a Nebach, even the shawls did not put him on the map.

Nati - A little more specific please. Where in perek 8 does it say that Yidden have a chiyuv to worry about Benei Noach's mitzvos?
Ben Eliezer - This seems to be the MO. WHen you do something stupid, or your party/chassides/ana"sh/fellow cult-member/all of the above, does something stupid and someone calls you out on it, you just call them a hater. Nothing you ever do is wrong and nothing you ever do is stupid because the other guy is a hater. Get the logic? Great, now explain it.

"He checks every inch of the retzuos..."
Where did you get this from? Who are your souces? This is not true.
I personally witnessed him putting on tefillin on two occasions, and he did not do this.

Reb YY is a tremendous tzaddik and a talmid chacham who davens at great length, repeating certain words over and over.

I personally witnessed Reb Yisroel stand Shemoneh Esrei on a motzoi Shabbos for one hour and fifty minutes. This involved countless repetitions of words and phrases, as is his custom in all blessings and all parts of davening (except Kaddish where he does not repeat). I never in my life saw a person daven for so long and with such intensity.