We sometimes forget that before Yiddishkeit was represented by the (wannabe) Litvaks and Hungarians there was something Peylishe Chassidus. That's "Polish," for those who have a hard time understanding accents other than their own. Most of them were born out the schools of Peshischa, and later Kotzk and Vorke. This sefer, aptly named "ימות עולם" - from the previous Amshinover Rebbe in New York, Reb Itzikel - gives us a glimpse into what was once a world of Jews, the likes of which G-d Almighty has ceased to create. We've referenced this sefer before,  and again, here,  and plan on doing so sporadically in the near future, be"H. Ignore the page numbers and the אותיות, they're in no specific order. 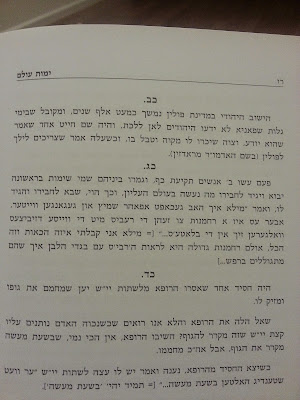 Recent news items regarding all kinds of leaders, באבות, and similar people getting into all kinds of trouble got us thinking about the current system, and how many people look elsewhere (outside the leaders of major yeshivos and chassidisen) for leadership and guidance BECAUSE they're so disgruntled by the mainstream Jewish leaders whose only claim is a famous last name and garments that are long out of style. Which is why you see Hungarian hats hanging out  - front and center - by Sefardic so-called mekubalim, by the hundreds! Some of you have told me that it's time to go back to the old system of "semicha," where in order to become a member of the society of Admorim you need to be ordained by a current Rebbe. That would at least keep the charlatans from becoming leaders who take peoples' hard-earned money. Yet, here we see that the Rebbes themselves, the pure-breds, will have their own problems to contend with...  and this goes back a ways...אוי וויי 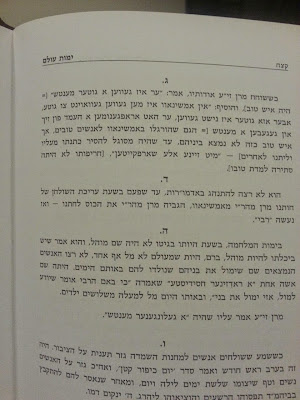 The above page discusses the Rebbe R' Shmuel Shloime ליינער of Radzin, hy"d, and how he became Rebbe. He was married to the daughter of Reb Yosef (brother of Reb Shimme'le) of Amshinov. Pictured below is the Rebbe (c) with the black beard on the streets of Poland. 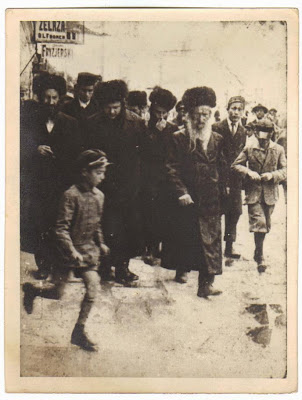 Where can I get a hold of this sefer?

Sorry Tzig you've got it wrong again !
Galicia was on the chassidishe map before Poland. The first to cross over the border into Congress Poland was The Chozeh of Lublin whgo was already a talmid of the Rebbe R' Meilech of Lizhensk. Peshischa & Kotzk etc only came along later.

I know his nose well (he hangs in my dining room, but which one exactly is he in this picture. He was my Zeyda's Rebbe.

Which one is he exactly. I know his prominent nose. He is in our lounge room, my Zeyda's Rebbe.

Peshischa and kotzk were talmidim of the Chozeh. What else is new.

@pitputim Can you please submit the picture you have to this forum?

Chochem
"Peshischa and kotzk were talmidim of the Chozeh. What else is new."
yes yes they were both by the chozeh....
get your facts together.
But they had different rebbes Muvhokim

What are you talking about? The Rebbe Muvhak of the Yhudi Hakodosh was the Chozeh, he was the rebbe muvhak of Rebbe Reb Binem.

Yitzchok of Vorka and Kotzker were top talmidim of Rebbe reb binem.

You wana say because some of his talmidim learned under the chavas daas?

I am also surprised, Hirshel, that you dind't mention the Chozeh.

And he wasn't in Galicia, he was in Poland.

The CHozeh was the Rebbe of just about every chassidus, barring efsher, Lubavitch, not sure who else.

What is the Sefer and can it be bought or downloaded?

the sefer is ימות עולם