Press Release: In a new fascinating book, a Lubavitcher in Boro Park, Rabbi Chaim Dalfin, author and Chasidic historian, reveals mysteries about his 28 years living as a Chabad Chossid in the Chasidic neighborhood of Boro Park. Traditionally, Chabad Chasidim live in Crown Heights and many other Chasidic groups live in Boro Park and Williamsburg. Rabbi Dalfin shares his childhood experiences, the struggles, challenges and joys in a most humorous, yet, telling way. He has two entire chapters about two of Boro park’s most interesting places. One, the world famous Shomrei Shabbos shul at 13th Avenue corner 53rd Street. This shul isn’t just another shul. it’s the world’s most used shul, with a twenty-four hour soup kitchen, services from 5AM to 3AM and attracts all kinds of people including people who find peace and solace in the shul. 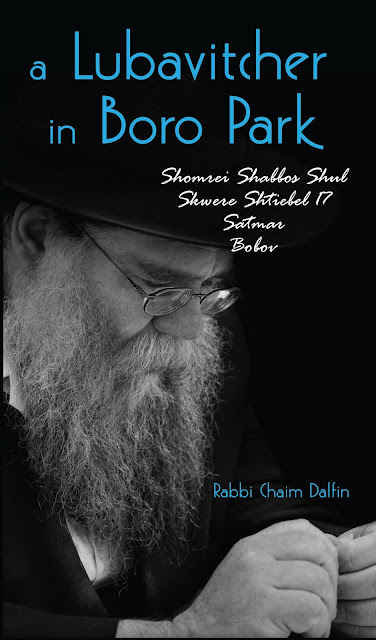 besides the shomer Shabbos shul, Bobov was/is the hot spot, Bobov brought the true original chasiddus to Boro Park, one cannot compare chassidim in Boro Park before and after Bobov moved here.

regarding the brainwash institution called new square, which is just an American fabricated movement with strings attached to the tiny hut village of belz known for its muddy swampy dirt roads, this dirty town`s local rabbi was Rokeatch a known dictator and power hungry fellow. he was actually against going to America thanks to him most of his followers perished in ww2. Belz of today is a liberal thing, he likes to play both worlds. one cannot connect evev with a thread belz of today to the belz of once upon a time.

Boro Park means Bobov, Bobov was the true leader who made BP what it his today. not satmer, not belz, and of course not new square of Springvalley.

therefore I wold leave out from such a book satmer and some shtiebel located on the 17th ave. l

B: "he was actually against going to America thanks to him most of his followers perished in ww2"

I never knew that most belzer chasidim wanted to come to america? is the mosad now seeding zionism in bobovers too?

Bobev also managed not to be shunned by satmar, that made them acceptable by many satmar-none-satmars, as an easy cruising chasidus, unlike those who where labeled anti-satmars and associated with the far left, took them much longer to grow or make a difference when they were in disarray themselves.

Anyone have a link to buy? The link on this site is not working