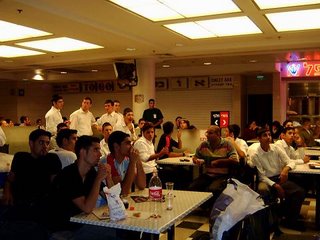 I realized that we in Lubavitch have lots to learn from our Lithuanian friends, namely how to minimize your losses and keep the public perception of you at very high levels.

In the Yeshivishe-Litvishe world today there are basically 2 groups, Yeshivishe and "Modern". What I mean is that although both groups attend the same elementary schools, the same Mesivtos and Yeshivos, daven in the same shuls, and live in the same neighborhoods the more modern are not part of the Yeshivishe world, unless they become a full-fledged "Yeshivishe guys" and girls. This does wonders for the percentage of Bnei Torah that lead "Torahdige lives", making the Yeshivishe system seem almost fail-proof.

In short, to protect their name and reputation, they discard a large percentage of their Talmidim. Of course their money is still green and good come Yeshiva dinners and functions, after all, Yeshivos can't survive on Kolel Yungeleit and Melamdim alone, right? We in Lubavitch should maybe learn from them, that way we too can wave our "stats" around and say "look at us". Or Maybe not.

This is not something to emulate. In the Yeshivishe world if you are not a "Ben-Torah" then you are a "Baal Haboss" which is one of the lowest forms of existence. Once a bochur or yungerman leaves the Beis Hamedrash then he has no ties to the yeshivish world except for the tuition/dinners for the next generation. In the Chassidish world there is room for the sinner and the believer. Everyone fits under the Circus Tent.

That is a lie.
The people who go out to make a living are just as accepted as those who toil in learning all day in kollel.

accepted by whom, themselves? Please.

what a caustic manner of looking at an issue....if this were a lubavitch yeshiva you would reframe it completely and say how the rebbes care about each and evry child in the moised regradless of background, hype up the 'inclusivity' angle, etc. the yeshivish and lubavitch 'core members that eminate from each of the respective larger non homogneous groups (yeshivish plus modern) and (lubav plus everybody), eminate as a core later on in much the same way for each group..those who wanna be more frum become so in each group...more lubavitch, more litvish in an organic kind of way...whats hard for a lunbavitcher perhaps is that when someone falls or doesn't get frummer within the 'lubavitch family' it bothers and seems like a failure of sorts, a breach in the family, when this happens in 'yeshiva cirles' its rather: this yid went litvish and that yid went modern; ie , they were never a family/community...it wasn't about throwing away anybody....

you graduated college, right? you can do better at writing. I have no idea what you wrote.

i will attempt more clarity/simplicity

in writing your post and analysizing the 'yeshiva system', if you switched the name from yshivish to lubavitch your analysis would be kinder, and not so cynical. Yeshivish style yeshivas accept different 'kinds' of yidden as does lubavitch. Both groups have a large percentage that don't become core yshivish or core lubavitch. when this happens in 'yeshiva cirles' its rather: this yid went litvish and that yid went modern; ie , they were never a family/community...it never was about throwing away anybody....
a lubavitcher looks at the same scenario and considers every yid part of the same yeshiva family/community so it appears that yidden fellout, were pushed away/thrown away if they don't become more lubavitch...in other words: lubavitch 'fails' because it has bigger expectations than the yeshivish institutions that you describe....

you couldn't be more hopelessly wrong. The Yeshivishe circles have set up a system where only the best are allowed to carry their name, leaving only the best in their circles. Therefore, when speaking of their circles they can boast and say that there are only Bnei Torah amongst them. The rest of the fruits of their system are conveniently forgotten about. A Lubavitcher, even after ch"v removing his beard will always feel a connection and will wear it on his sleeve, either by practicing Minhogim, davening in a Lubavitcher shul, visiting the Ohel etc, thus he's making Lubavitch "look bad".

ht, friend, i need to get personal even via such an impersonal vehicle as the blog itself because i believe that its mamish an emergency. i believe your thinking patterns are hurting your neshoma...if one constantly identifies drek (accurately or inaccurately is immaterial), thats were he dwells. It stinks up the rest of his perceptions....
one's angst must be transformed into something positive or one will bust up...thats psychological talk..chassidus expects that you see the higher truth of existence beyond the material drek and engage in transforming the world and your thoughts ....
hatzlocha