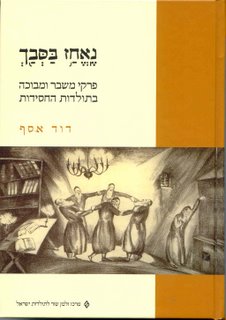 The book the haters are foaming at the mouth about

I find it interesting that Jews who purport to love G-d and his Torah will lie and even resort to books by Maskilim and פושעי ישראל just to prove something that's totally irrelevant. Why is it relevant to the veracity of Chassidus if such and such had a nervous breakdown, or his brother was insane, or his son was a Communist? It isn't, but to a פארשטונקענע מתנגד or a to disenfranchised former member of the clan this will suffice to make his point, his supposed point that Chassidus is a false movement ח"ו and that so were their leaders.

The question here is not what the author had in mind when he wrote it, I don't know him nor his motives, he seems to be excited about Eastern European Chassidim. The question is why all the excitement on behalf of the public? These are some of the same people who burned books when one of their own dared to write that a certain Rosh Yeshiva read novels as a young man! Many of them claim to do out of a "quest to learn the truth", I have my doubts, just as I would have doubts about myself when reading books about my adversaries.

At first my reaction was to ignore it, but when I was told via e-mail that I'm "afraid" to talk about these subjects, and that I should question my Rabbeyim, this thread was born. If the thought of even reading such accusations frightens you then don't click on the link to the book.

I find it ironic that the book is published by the Shazar center......
Posted by Hirshel Tzig - הירשל ציג at 5:39 PM

There you go again.
You feel so threatened by a few snags that you have to write such grobbeh personal attacks on all misnagdim. A guy 6,000 miles away, Rav Eliach shlita, writes a sefer about history of over two hundred years ago and you feel so threatened that you have to make personal attacks on him.
A Professor from a University, who is not part of the Yeshivishe velt, who is not even frum as far as I know, who should be termed a maskil instead of a misnaged, wrote a book about Chassidishe scandals on his own, but what difference does that make, easier to make him into a misnaged and lump him together with Rav Eliach, who is from a different world, rather than admit that your problems are not all from the snags.You and your friends are the ones who feel so threatened that they resport to various dishonest tactics and vulgar attacks to try to discredit works they don't like.Anything to avoid addressing the real issues.
Chassidim can put out all kinds of books with bubbe mayses, but if snags want to put out their side of the story they must be muzzled.

I guess I wasn't clear enough. The post is not meant to attack Assaf, but rather the haters who'll go to any length, and quote anybody, just to get a story.

Eliach is just revealing to us the lies we were told all these years; that the Litvishe Rabbonim respected the founders of Chassidus. The truth is to them the Kedushas Levi was a naive fool.

that above quote was not from wannabe. someone stole my pen name

sorry wannabe, i didn't mean to "steal" your name. I just forgot that some one else is using it.

"א מתנגד איז א דבר מזוהם"
Hirshel why don't you tell us who was michadesh that beautiful Chassidishe saying, dripping with such deep ahavas Yisroel that Chassidus is so renowned for? Was it you? Was it someone from a few doirois ago? Such a geshmake vort, so full of love - why don't you say it bishem omroi?

Re Litvishe and the Kedushas Levi- He was a smart man who they disagreed with.Where do you go to say that they considered him a naive fool.Obviously he was a big talmid chochom.

the Mekor is irrelevant

was the Kedushas Levi as "smart" as say, Reb Meir Chodosh? as learned as the Vaboylniker tzaddik?

I tend to ignore such stories and books for that reason, but a snag was harassing me, so instead of posting his comments I wrote what I wrote.

I see you as a non-Chossid, not as a snag, you're too respectful.

Indeed Tzig, you pointed out the only true point of interest in this parashah, and the most hurtful one - that this book is published with the name Shazar related to it. Talking about turning over in the grave...

what's the problem with relying on the testimony of irreligious historians?

1) I'm not speaking about the book הגאון
I speak of the book נאחז בסבך by David Assaf.

2) for some reason the Chabad haters, many of whom are of the Chassidic persuasion, drink with glee the parts about Chabad, because they, in their mind, "incriminates" the FR. The parts that were known to the world about the Kotzker, the Ruzhiner's son and the Chozeh, but were attributed to deliberate misinformation by Maskilim and other Chasidim-haters, has not excited them as much. I wonder why?

The entire topic is somewhat interesting from a historical perspective, but also fairly foolish. Judaism was never concerned with history, never.
Not in Tanach, not in mesorah, nothing.
Purim, Channuka, you name it - the historical record or posterity were never the issue. The issue was, always, religious.

why then all the details in those stories?

If you read the historical account of Purim from Persian records, the details are quite different. The point is not that our records are incorrect, but we have a different take.

Here, try this at home:
Take your keds to the park. On the way home, ask each of them to tell you all about the trip, and you'll see how different each account is...

are we then comparing historical accounts of incidents to a child's?

Gimme a break - do it with adults and you'll get the same result.
The point is that each individual will see things in their own way.
From Chazal to modern times, they have had different priorities than the need for an accurate historical record.

I agree with your sentiments Hirshel.

History is in the eyes of the beholder, mekushor, so that each of those eyewitness accounts, be they children or adults, are accurate history.

As far as inaccurate history, J'Acusse: You yourself just did it. There is no mention of Purim in Persian histories.

Tzig, look in Ohr Zorua Letzadik, (R Tdadok) page 39 in the new print, where he seems to say similar to MEKUSHOR, at least WRT Chazal.

I wish you'd be more specific, maybe bring more of what he says?

Why is it limited to Chazal?

2. Purim is a PERFECT example. First of all, Purim IS in Persian history but it sounds a bit different. I don't have the time right now to discuss this at length, but maybe in the future...

I'm not sure if it's limited to Chazal. In the piece I referenced, he talks about the stira between Josephus' account of the Churban and that of Chazal. He concludes that Josephus wrote according to what he saw and heard, while Chazal wrote their account based on their ruch ha'kodesh. Chazal's version is therefore the "truth".