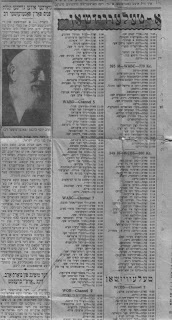 It's thanks to Akiva of Mystical Paths that we have this thread. He probably didn't intend for them to be used this way, at least I don't think he did. He sent me this article from the old Forverts of January 29, 1954 where there was an story announcing the arrival of the late Ponovizher Rov to Newark, NJ, and a subsequent fundraiser there for the Botei Avos Childrens' homes which were started and run by the PR. [It appears right next to the day's TV listings, not that he could do anything about it.] It's interesting to note that the announcement was placed in a Socialist anti-Religious paper, and it wasn't an issue in those days. I'd also bet that most of the Yidden there in Newark at the parlor meeting, and probably the host himself, were not Shomer Shabbos either, yet the Rov took their money gladly, and built the great institution of learning with it. Interestingly enough there's no mention of the great Yeshivah on the Hill in the Ir HaTeyreh Bene Beraq! The Harvard of Yeshivos gets no mention as part of the Rov's activities! The halls where Maran of Vaboylnik - the greatest leader the Jewish people have ever known - are not mentioned! In the spirit of the 9 days I would say that maybe the PR made separate trips for the different institutions under his auspices; so this trip was probably only for the Childrens' homes.

Or, maybe we can say that the late PR was not the radical that some people would like to reinvent him as, and maybe he was a true Ohev Yisroel. Maybe to him the biggest zechus a Yid could have - even a Mechalel Shabbos r"l - was to allow him to support institutions of Torah, and maybe that would eventually bring him back. Maybe the late Rosh Yeshivah, who used the Ponovizher Yeshivah as his pulpit, really didn't follow the spirit of the founder, although he WAS the one who hired him?! Well, what can I say? there I go again, trying to figure out what went on in peoples' minds decades ago.
Posted by Hirshel Tzig - הירשל ציג at 1:34 PM

Exactly. And there you go again, ascribing the worst of motives into people whose ankles you will never reach in any area related to ruchnius. Ever.

You are an evil man to write this kind of garbage on Erev Tisha B'Av. You are an embaressment to the Rebbe. May you be zoche to do teshuva.

evil? OBL is evil, I'm insecure at worst, and right on target at best.

Never right on target. Not close.

No, you are evil if you say evil about other people. Lashan HaRAH--talk of the BAD.

I believe this was the Rav's first visit to the US. And Newark was a very frum area at the time, though indeed the frum community was wealthy.

So no mention of the Yeshiva on the Hill because it didn't exist yet.

The Yeshiva on the hill was founded TEN years prior to that visit.

My grandmother's first cousin was a secular Israeli, born in the Lita, who lived in Ramat Gan. When she came to Eretz Yisrael with her sister, she met the Ponevezher Rav. The Rosh Yeshiva had been a landsman with their father (I am not sure from where: Smorgon, Vileyke, or Kotiniyan) and and he would let them stay in the dormitories during ben hazmanim. The Rosh Yeshiva told the chevra not to bother them and let them do whatever they want. Mind you, it wasn't like there was any money to be raised from them. It was pure chesed. Somehow this aspect has been camouflaged by the neo-Litvishism centered around the Chazon Ish

A Jew
Think about it, the CI is camouflaged too in books like Masseh Ish 7 vol.,The Kulitz family in the Hachoze M'lita have a total different view on him. They were family friends from Kadin, and the CI loved when the came to keep company for the rebetzin,
Also Gedalia Nadel had more openminded discussions with the CI then he had with his BIL the Stiepler.