Review - "From the Ashes" 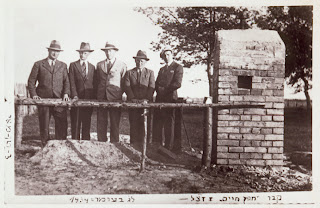 (From USHMM, via A Simple Jew)

Thanbook puts in his 2 pennies

"But the movie was bizarre. Clips of R' Weinberg talking about himself, or other people talking about him and the yeshiva, and how great they are, looking for all the world like an ad for Aish HaTorah - come to our yeshiva - alternating with clips of Holocaust scenes narrated by some guy with a South African accent (some British colony or another). Why the pictures of the Holocaust, except that it's a Tisha B'Av movie, and of course we have to bring up pictures of the Holocaust?

And of course, R' Weinberg implies that he invented kiruv - "bemakom she'ein ish, yishtadel lihyot ish" - implying that nobody else was doing kiruv when he started Aish. Riiight. Aish HaTorah started in 1974. He didn't even start the first kiruv yeshiva in Israel - that was the Diaspora Yeshiva, started in 1964 by my wife's cousin, R' Mordechai Goldstein shlit"a. And where did R' Goldstein learn about kiruv? Working alongside R' Shlomo Carlebach z"l in Chabad in the 1950s. (See "Returning to Tradition" by Dr. M. Herbert Danzger)

The whole thing was very self-serving, and not so interesting in terms of actual kiruv."
Posted by Hirshel Tzig - הירשל ציג at 9:14 PM

Thank goodness someone said it that wasn't Chabad!!!

I'm not talking about the Chabad tooting at the end {that's always nice but not necessary}, I'm talking about how badly thought out this movie was. I was going to go all out on it, but I was afraid it was only the Chabanik inside of me.

And I can only imagine how much guilt those guys gave that poor Israeli kids on the way to Majdanek to make him break down like that...

And, while I'm at it... that guy's sensitivities aside, I found the sobbing description of his child's death as an amputation to be quite distasteful.

And why was he reading off his notes?

"And of course, R' Weinberg implies that he invented kiruv - "bemakom she'ein ish, yishtadel lihyot ish" - implying that nobody else was doing kiruv when he started Aish. Riiight. Aish HaTorah started in 1974."

1) R. Noach was doing kiruv before Aish was started. He worked with others before starting his own Yeshiva.

2) Mentioning בּמקום שאין אנשים השתּדל להיות איש doesn't mean that someone claims that they invented something. It means that they felt there was a void and a need where they were which needed to be filled. There was a need for non-Lubavitch kiruv of a certain type, in the view of R. Weinberg. If there was a Yeshiva somewhere else doesn't matter, there was still a need for more so R. Noach tried to provide it.

To clarify, because I have heard Reb Noach give his "They called me Noach the meshugener" speech half a dozen times, live:

He and his older brother z'l were trying in the 50's to get roshei yeshiva on board with prioritizing kiruv. R'Aharon Kotler did not feel it should be prioritized because (according to R'Yaakov Weinberg's account) he felt yeshivos gedolos should be prioritized in the immediate post-war period. As R'Yaakov Weinberg quoted R'Aharon as saying, "When someone falls off a building, and has broken arms and legs, but has also had a heart attack, you deal with the heart first." So too in the post-war period, R'Aharon felt that the yeshivos are the first priority. I don't know how much of this is R'Aharon and how much of it is R'Weinberg's interpretation, but that's what he used to say.

Even after 1967, kiruv was still an oddity, particularly in Modern Orthdooxy. LSS was regarded as a pariah by the other Modern Orthodox shuls in part because of its kiruv orientation. And its style was much closer to Chabad's mitzva-tank methods. LSS had the Sukkah Mobile and the Torah Van (not having Chabad's military metaphor, and wanting to appeal to the liberal Upper West Siders). We had to give that up when the parking lot we rented space from, became an apartment building. Sukkah-mobile was my big activity on Chol Hamoed during high school. "Are you Jewish? Do you want to make a blessing on the lulav? Do you want to have a bite in the Sukkah?"

Tzig is fast to jump on the anti Snag/Aish movement with any ammo he can.
Some facts to muse over:
Every Lubavitch promo/video that I have seen always incorporates the Rebbe and people talking about him.A lot.How is that different than what Aish is being criticized for?
As already stated before, R'Weinberg was in kiruv long before he opened up his yeshiva.
Lubavitch openly claim that they were the originators of 'kiruv',ACTUALLY,the Lubavitch model is based on the Novardoker yeshiva system in Russia and later Poland that would send 'shluchim' to open up yeshivas across Poland.They were the first into kiruv.

It really does not matter who was first, it matters that Jews reach out and it's a major turnoff for me that 'kiruv' is being 'used' this applies to many in the kiruv 'business'

Last but not least:Rabbi Weinberg is a one man operation.He is no Rebbe with dedicated chassidim.Even so, he ,as one man has done far more than any Lubavitcher shliach.Before jumping on me I'm comparing him to other shluchim,not the worldwide shluchim movement with thousands around the world.Instead of focusing on the negative, why can't Lubavitch focus on the good things that Aish with comparitively so few shluchim has managed to do.Ditto btw for Ohr Someach,that with only about ten centers worlwide has done so much.

Before jumping on me I'm comparing him to other shluchim,not the worldwide shluchim movement with thousands around the world.

No, there should be no "before". That was an absurd comparison, and nothing you typed afterwards mitigates that.

What does Aish do that so few Shluchim do?

There are 26 Aish centers around the globe and 3,000 Chabad.

"Rabbi Weinberg is a one man operation."

So was the Rebbe.

Yehupitz,What was absurd about my comment?
Maybe you're mixing me up with somebody else.
All I said that R'Weinberg without a large chasidic following, has managed to do a lot.Lubavitch as a group has done more but they have thousands of shluchim.I was only bringing out the power of one person.

Arbiter
Chabad mont emmes, right?
I'm not getting into who is bigger the Rebbe or R'Weinberg, just pointing out that R'Weinberg was a one man org as opposed to Chabad chassides founded before the 18th century, with a long history and followers and many,. many more means than a young yeshiva guy.That's all.This is not an ego trip of who is bigger.
The Rebbe managed to set up an amazing network but comparing him to R'Weinberg is apples and oranges, just not the same thing.
As far as I'm concerned anybody joining into bringing Jews back is to be commended.

For arguments sake, here's just a few individual Shluchim who have accomplished more, ON THEIR OWN in a single region, than all of Aish Hatorah combined:

"As far as I'm concerned anybody joining into bringing Jews back is to be commended."

If so, there should be no reason to make disingenuous statements like:

"Even so, he ,as one man has done far more than any Lubavitcher shliach"

...This isn't an ego trip, it's simply a glimmering hope for some intellectual honesty.

Something about the above poster tells me he would rather Jews remain secular than join a non Lubavitch program.
Sounds like there are Jews and than there are Lubavitchers.

I hope your other 3 examples are more accurate than this one, which I have direct experience with and I can tell you is simplly not true. Not even by a long stretch.

I was factoring in Sydney Vehamedina. Perhaps it's 25 at the least. To be fair, this one was my own estimate. Unlike the other three, I couldn't find exact numbers listed on Chabad.org, it's just that I too have personal experience with it.

And by Shuls, I was referring to those that have Chabad Rabbonim, not counting Lubavitch Shuls.

If you're including Sydney, Brisbane, and other cities, then what's Rabbi Groner got to do with it?

Oy, you people are way too complicated and politically inclined. If you wanna be that picky, drop R. Groner off the "success" list.

I think the point still stands. And, if you can count all the individual Mosdos in Melbourne, Im sure you can get the magic number 26.

The analogy I was hoping people would understand was something akin to McDonalds.Once there is a strong backup corporation with finances trained staffers, managers and an established franchise it's not such a 'chochma' when you have thousands of branches worldwide.
But you guys don't want to get it so you won't

Btw, out of the shluchim mentioned I think that R'Groner has had the most impact on his Kehilla percentage wise.See, Melbourne only has 50 thousand Jews today, as opposed to Cali with about 900 thousand and Florida with a couple of hundred thousand, that I don't have time to check on the net to see an official figure.R'Groner is the closest example to the Aish model although to be honest the couple of Russian Lubavitchers who were there before him like S
R'Serbriansky etc planted the seeds

And let's not just compare the amount of good each group does. As pointed out by others, Chabad by dint of its enormity alone does more good than Aish. But in the bad areas: Chabad just tries to increase mitzvas in the world; Aish makes spiritual growth feel like getting sold a used car.

Let's be honest about the numbers.

Hey, if Snags wanted they could take a page from Lubavitch and count the dira of every snag Yeshiva man as a Snag house and presto, thousands of Snag houses.

Don't think you are the only one who can play that game.

and Rabbi Weinberg has also developed lots of things - he was one of the founders of Ohr Somayach, with 11 branches around the world, and as someone mentioned above, 26 Aish branches. I think Partners in Torah started as an Aish initiative, although it's now Torah Umesorah. So his achievement in kiruv is comparable to one of Chabad's big state organizations.

Which is a) not shabby, b) not a contradiction to the flaws of the film.

"Let's be honest about the numbers.

Dude, look at the lists. It's not made up. It can't be made up. Unless of course you go visit all those cities and towns and tell me that's nothing there. This is such an absurd allegation. All of those addresses exist and there are people there running them. It's impossible to make something like that up.