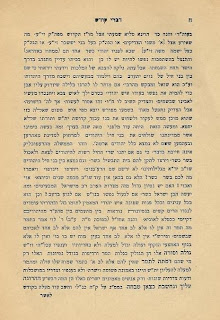 Thanks to the curiosity of A Simple Jew I was supplied with a post for today. He's kind enough to browse ebay for anything pertaining to Lubavitch and Jewish Hungary, so often times there are some real gems out there for us to enjoy. What we have here is a pamphlet of the Torah that the Munkatcher Rov, the Minchas Elozor, spoke on Hoshana Rabboh of 5693, where during saying the Hoshanos he would stop and speak Torah BiBechiyos Atzumos, KeMinhag Sanz. The late Satmar Rov also carried on that Minhog, and some of the most dramatic Torahs were said during the Hoshanos. Speeches about Chinuch, Tznius, and Tziyonus were commonplace, all accompanied by loud cries. The Kanoyim in Eretz Yisroel used his speech against the Agudists and moderates to try and get them to right their erroneous ways and be saved from G-d's wrath.

In the speech the Rov relates a story he heard from his Zeide that happened with either the Yismach Moshe or Bnei Yissoschor, where a small-town Jew came to him with a dilemna. He had a son who was a good Jew and went in G-d's ways, but was now about to be drafted into the Czar's army. His father knew that he would have a very difficult time being observant, and would probably not come out of there a religious Jew, so he wondered if he could somehow avoid the problem. He'd kill his son, says the father, all so that he'd never transgress G-d's will, and all will be good. Of course he was told that he may not kill his son, and that G-d will help him and the boy, but we do see how even for this simple villager losing his son would be nothing compared to having him leave the way of the Torah. "That was 100+ years ago," said the MR, "what would should we say today" (70 plus years ago - HT) when our boys are sent as far-away as Bohemia and Moravia and are told by army Rabbis there that no longer is it necessary to eat Kosher and keep Shabbos?!"
Posted by Hirshel Tzig - הירשל ציג at 9:38 AM

Minhag Tzanz to cry on Hoshana Rabba?? and Droshes? where did you pick that tidbit up?