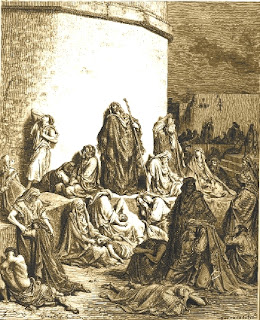 After Minchah in Midtown on Shivah Osor B'Tamuz I met up with an old Yeshivah mate of mine. (Nisht Chabad) This chap has yet to find his match, his Bashert if you will, and he works at his father's business in the city. It's quite obvious that his failure to find a suitable Shidduch, when all his friends have grown kids that they do homework with and visit in camp, has affected his entire outlook on life, and he remains quite bitter. It's difficult for him to say the words, "wife," "kids," "married," etc, and I try my darndest to refrain from speaking about my personal life altogether. We'll speak about work, the trains, the buses, and working on legal holidays, but the whole marriage/kids subject is taboo to me. I'm a super-sensitive guy and try and keep from hurting other peoples feelings as well. I guess you all had me figured for a ruthless attack dog, right? wrong.

Anyway, to make a long story short, we got to talking about a recent move I made in life, a move in location. That's right folks, the Tzig has left Boro Park and has headed for the suburbs. It'll take some getting used, but the Mother Tzig, mother of the little Tzigelech, decided that it's time to go, so we went. Now I need to schnorr rides to and from the bus, and take the car everywhere I go. So we were discussing the move and all it entails; the commuting, the hard water, the snow removal, and everything else. He suggested that I ask for permission from my boss to telecommute once or twice a week. I said Id definitely consider it. At the end of the discussion, being that it was the 17th of Tammuz, he tells me "Have a meaningful fast." I was going to ask him what he meant but he was already halfway down the block, and I was wasting company time, so I never got an explanation.

Now, I know this much: I know that the main point of the fast is not the refrain from food, but the Tshuvah that should be accompanying it. I know the Rebbe would speak "Divrei Kevushin" on fast days. But I'm not quite sure what a meaningful fast would consist of. Is it repentance? an addition in Ahavas Yisroel, the unconditional love for our fellow Jews that we so lack, and which destroyed the Botei Mikdosh that we mourn till today? Maybe. But why then do we use the term "Meaningful?" Is it an Artscroll thing?
Posted by Hirshel Tzig - הירשל ציג at 10:44 PM

"I'm a super-sensitive guy and try and keep from hurting other peoples feelings as well."

So who writes your blog then? Just kidding ;)

So the Tzig has made a move but not to Kan Tzivo?Nu, when are you going to make that 'meaningful' move? I guess it's something about 'chinuch habunem' that is not exactly 'chasidish' or particularly yiddish in Crown Heights....btw, on the topic of 'chassides'-So all that chassides you 'bebbed/learned' still leaves you without any idea about what a fast is supposed to be about, though 'you know' the Rebbe used to give 'divrei kevushin',,,,,nu, nu.
Lubab inc is looking good.

May I suggest a bicycle to get to the bus/train station. Saves money on gas, is good for your health and more fun.

It's not easy to ride a bike in a hat and jacket though...

American Orthodox Jews as all Americans are obsessed with greetings for specific days.
Chassidim have all sorts of special greetings for minor occasions eg a guten slicha, a gutten erev shabbes etc so we need something to say on the fast day. Why not a gringer Taanis or easy fast. Aha ! but we are all such Pnimusdike Yidden tht we have to add meaningful. Believe
me fasting is enough without the pnimius involved.
Your move should be in a mazeldike Shaahe and your family should give each other lots of naches.

did a bug bite you in the a--? is the bank about to foreclose on your home? The Repo man coming for your car?

"But why then do we use the term "Meaningful?" Is it an Artscroll thing?"

It's a heterodox thing. I recall from my days at a C summer camp where that was the accepted greeting from the Hanhallah on 17 Tammuz and 9 Av. The desire was to acknowledge the significance of the days. However, one cannot do so by suggesting one have a "good day" for obvious reasons. So, the "meaningful" conjures up "significant" without sounding trite or flippant.