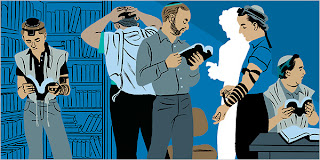 From the NYT Magazine

A number of years ago, I went to my 10th high-school reunion, in the backyard of the one classmate whose parents had a pool. Lots of my classmates were there. Almost all were married, and many already had kids. This was not as unusual as it might seem, since I went to a yeshiva day school, and nearly everyone remained Orthodox. I brought my girlfriend. At the end, we all crowded into a big group photo, shot by the school photographer, who had taken our pictures from first grade through graduation. When the alumni newsletter came around a few months later, I happened to notice the photo. I looked, then looked again. My girlfriend and I were nowhere to be found.

So he marries a shiksa and wants recognition? I don't get it.

If we are to believe the hype, the guy learned gantz shas but still doesn't know that "lo sischaten" is an issur min hatorah

A Harvard professor, who can't understand that his Orthodox Day School doesn't wish him a Mazel Tov on his marriage to, and baby with an non-Jewish woman...

Is he really that clueless, or is that just the style he employs to write the article?

Did anyone (including Hirshel) read the whole thing? If so, I think you all missed the point he was trying to make.

The simple solution to this would have been to not include any family pictures or news outside actual alumni news. The next best would have been to sit down for a meeting with him and with heartfelt sadness let him know that as much as they would love to include him in their alumni news, they cannot, and that the issue is not that he should have married someone Jewish, but that they wish this woman that they did marry would be Jewish.

If he married a shiksa, he has no point. The purpose of the article is flawed and engineered entirely to cause people to hate klal yisroel.

That isn't the point. Folks, you gotta read beyond the first page.

It's sad to see, (basing myself entirely on the author's perspective) , that G-d isn't mentioned at all in the Yeshiva's curriculum. No love of Hashem, no discussion of how learning/ mitzvos are supposed to help one find the truth and cleave to Hashem, it just wasn't there. It seemed as well that all the learning was couched in ancient terms, and it somehow has to "fit" to modern times, whereas the secular subjects were vibrant and real.. Unfortunately, when a person sees everything as ancient and needing to fit into today's life, versus life fitting into Yahadut, if the shoe doesn't fit, he just won't wear it.
Just my two cents on the article.

Just curious whether his parents maintain a c lose relationship with him. he seems to blam the school and friends, but no mention of his family for good or bad.

Yakov
Did you look in the Shmussen of Rybs ,its full of ahaves hashem, know your facts before you write.