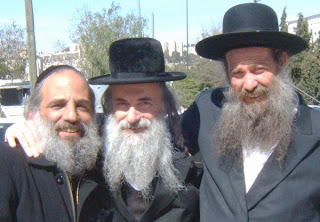 A local non-frum/maybe half-frum Jew walks into shul to say Kaddish. He seems like a somewhat affluent man, yet disheveled, like he hasn't slept or shaved for a few days. It turns out his dear wife of many years just passed away, and he's still in middle of Shivah. So the Rov tells him to sit down on a low chair, and that the people davening there will bless him for his recent loss. So, one by one he hears the "HaMokom" from everybody at the Minyan and thanks them for it, although he's not quite sure what it is they're saying. A Phenomenon like that is not something you see every day, but it sure does prepare you for what you might see outside of your local frum neighborhood these days.

There was this one gentlemen - a real Tzaddik, a Baal Tshuveh, yes, and most frum people can learn a lot from him - who also wanted to partake of this Mitzvah, (for lack of a better term) and who also started to say the HaMokom. Lo and behold that's all he could remember, he couldn't remember the words that follow! The pain and frustration that was visible on his face was worse than anything I had ever seen. Of course he wouldn't ask anybody what the exact words were, at least I didn't see him doing that. I also couldn't bring myself to tell him what they were, for fear of emabarrassing him further, since he didn't know that I saw him forget. So, he quietly and humbly walked away, in a very "aw-shucks" way lamenting the fact that he couldn't console the poor old man on his loss. What's ironic about all this is that he must've heard the phrase hundreds of times when being consoled for his own recent loss.....
Posted by Hirshel Tzig - הירשל ציג at 11:21 AM

Having spent a lot of time in Chabad Houses, I've seen this consoling many times, but, to be honest, I'm a little put off by the entire thing.

Most folks are just in it for the "mitzva" and just run by without even looking the poor fellow in the eyes and then just Daven the words. Everyone just parades right by and puts the guy on display...

Rachmana Libo baee !
Why just not say May G-D console you among the mourners of Jslm !
After all we add Yiddish to this formula too !
Unless we really have become Pharasees ??
Believe me there have been times when I have forgotten how to make Kiddush, be mezamen in Birkas hamazon even the Havdollah. I have seen it happen to roshe yeshiva too. Nothing to be ashamed of.

I helped make a minion in boro park in an apartment building once and after davening came over to say hamokom, forgot the rest, and sentence word for word... That would have been extremely embarasing but the moment was very pure. I was trying to do a mitzva, the mourners appreciated me trying and we were all in a very humble place existentially at the moment within our own lives and within each others...

I'm not a BT, never the less I can never quite manage to get that line out straight. Personally, I think it's psychological, I don't really want to know it. And so I don't.

I have just read this (2 years later) and even before reading the comments, I immediately felt what "n" describes, that the moment was pure. The non-or-half-frum Jew came to shul in need but without understanding. The Tzaddik could say only "HaMokom" -- a Bat Kol. The Bat Kol was the muteness of the Tzaddik, creating a bond with the non-or-half-frum Jew (how to measure?) and lifting him closer (how to measure?) to Hashem.