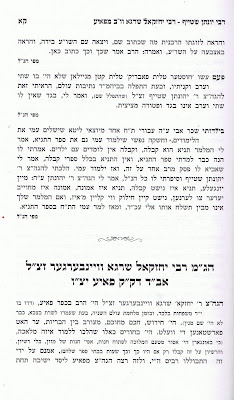 I hesitate to bring this page as proof of anything, being that there are stories in this book that I very much doubt, but hey! why not? It suits me, so I might as well... Zalman Levin, son of Reb Avrohom Dov HaCohen Levin, tells how his father hired a melamed - a Litvak - for him so that he could get some extra learning in. Young Zalman had a strong desire to learn Tanya and he asked the melamed to learn with him. (I'm not sure why he would ask the Litvak melamed and not his father, after all, his mekushorim would tell you that he was the greatest authority on chassidus since the Tzemach Tzedek, and even the MahaRash was not enough of a Tzaddik for him, but so goes the story) The melamed said that "Tanya is Kabboloh, and we don't teach Kabboloh to young children," or even older children, for that matter. Again, we can wonder what young Zalman was thinking; that the Litvak would learn Tanya with a young child? Besides, I thought only dor hashvi'i Lubavitch got crazy and started learning chassidus with young kids, no? 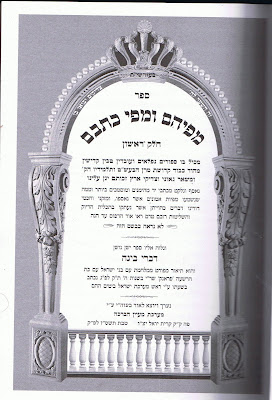 The story - as supposedly told by young Zalman - continues: So I went to Rav Yonason Steif, zt"l, and told what happened, that the melamed says it's Kabboloh and he won't teach it to young children. So he answered "my son, Tanya is NOT Kabboloh, Tanya is EMUNAH, and it's never too early to teach young children abut belief in Hashem and all that he does. If the melamed doesn't understand it send him to me and I'll explain it to him. From then on the melamed would learn Tanya with me too. The story is wonderful, and really suits me, but being that there are lots of stories that are told in his name that NEVER could have happened, being that the times don't shtim, I foresee a problem with this one too. IIRC Rav Yonasan Steif arrived on these shores in 1946, soon after the Holocaust. Gershon Tannenbaum's article tells us that he was the last RB"D of Budapest. I thought he arrived in 1938, I must've confused him with the Tzaylemer and Mattersdorfer Rabbonim. Zalman's father died on Shavuous of 1938, and Zalman was already a young man then, probably in his 30s. So when and where did this story happen? He was in Budapest as a child? s'leigt zich nit affen seychel bichlal!

When sitting here and trying to figure out how the compiler of this story book could have made such a grobben to'us, I realized that it's like the kashe "vee azouy hut noach gekent boyen di teyveh ven er iz geven blind," so too here. For those of you who remember, the answer to that kashe is : Noach iz gornit geven blind! The story was not told by ZL, I confused it with other stories in the book that were told by him. It was told by another Rov, one who remains a mystery to me until one of my good friends will get a hold of the book and look for the mesaper haMayseh themselves. אויבIt does seem like a "malach," since he said that he davened in Nesivos Oylem, the last bastion of "old Chabad".......... אזוי the story can be 100% accurate, and we Hungarians - at least those identify with RYS and the Budapest/Adas Yereim approach to life - need to start learning Tanya with out young children forthwith! Otherwise they could have serious deficiencies in their Emunah and be of questionable Jewish character, something that would easily affect their status regarding acceptance to yeshivos, and - gasp! - shidduchim!
Posted by Hirshel Tzig - הירשל ציג at 10:23 PM

Tzig,
Again, why the whole langeh arichus for such a mayseh?

The Tzig,
This post is one of the reasons I think you are an idiot.
Why:You build up a whole "toireh" on a nonsensical story on the way "shteching" the Malach and his followers and his son who did nothing wrong to you.
All built on a babbeh mayseh you konw is not true.
See, that's why I think of you as an Ungarish'n naar

The malach hired a Litvishe melamed for his son?! Interesting.

Anyway, maybe he just wanted a melamed who was more into nigleh.

You hear a lot about how the chassid vs. misnaged was so much bigger then than it is now but somehow I think people held it a little more in perspective back then and today it's just an excuse not to talk to each other.

I don't get it. Does the previous page BICHLAL indefinitely say "R' Zalman Levin" (as makor, "m'pi hana"L") - OR it's only hearsay for now, and that's what you're trying to obtain clear evidence thereof?

well, some of the other pages a reader sent me say that it was from Reb Refoel Zalman Levin, so I thought this one was too. It may still be. I need to check the other pages I have.

vos kenstu ton if RJB told the story himself!

Hirshel
Its not his son Zalmen, zalmen was probably a married by then when reb Yonasan came to the states. One of the Webermans are telling the story. Reb Yonasan has a campaign for learning Kabala in his chumash limudie hashem, there is still by his grandson in Monsey 1000,s of pages in manuscript on the Zohar never printed I hope it will get printed.

The story above reminds me strongly of another story that goes s.th. like this:Mayer Weberman asked the "malach" if he should teach his younger brother Tanya, whereupon the "malach" responded:"Is he too young to believe in the oibershter!?"
BTW, I think erev the Ba'al Hatanya's yohrtzeit we don't need stories about someone, who despite his vast knowledge in Chassidus, didn't understand the first thing about being a chossid, or how do you explain the fact that he took down the Rashab's picture ( the only decorative element in his house )saying:"By now I know more than he did"...

"BTW, I think erev the Ba'al Hatanya's yohrtzeit we don't need stories about someone, who despite his vast knowledge in Chassidus, didn't understand the first thing about being a chossid, or how do you explain the fact that he took down the Rashab's picture ( the only decorative element in his house )saying:"By now I know more than he did"..."

Did the Malach possess the Rashab's picture? It was a passport picture taken in later years and I don't believe that people had it in those days, especially in the US.