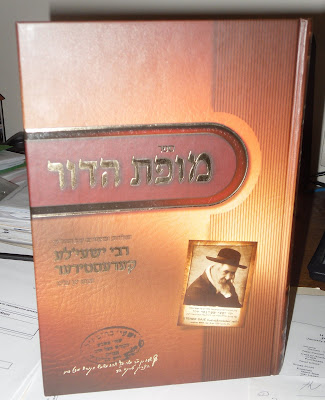 The new sefer about the Tzaddik Reb Shayelle Kerestierer, zt"l

In the tradition of sharing with readers what I'm reading I bring you this. 600 pages of Mofsim, one after the other, sometimes 2 or 3 per page, and most of them from Kli Rishon or Kli Sheyni. We spoke a short while ago how his main object in life was to help the unfortunate Yid in any way possible - even if he was a Mechalel Shabbos, and that very much is the case, but what got me was the Mofsim, one after another after another, Baal Shem'ske mayses one after the other, for 50 years. And it's not just that; Every person I spoke to about it - it seems - has a personal moyfes that wasn't even published in the book! I myself heard from my father, ZG"Z, how he heard from his shver, my zeide, how my Bubbe's parents (his wife - my Bubbe's - parents) were once evicted from their home by a non-Jewish landlord. They were left homeless, out on the street, with nowhere to go. IIRC they lived in Nyirmada at the time, which is about 50 miles from BodrogKerestur, where Reb Shayelle lived. They traveled there and told the Tzaddik how they were evicted from their home for no good reason by the wicked landlord and are homeless, a family with children. Reb Shayelle told them to write down the Orel's name on a piece of paper, and he then proceeded to take that paper and burn it in a burning candle nearby. He then sent them home, saying that it was all OK now, they had no need to worry any further. Sure enough when they arrived home the landlord had left this world. And the zeide would always stress that this wasn't some old man who you could say could've died anyway - he was "a champion," big and strong.

And there are hundreds and thousands more of those - unpublished stories that are kept in families and passed down from generation to generation. On the way back from a wedding last week I shared my thoughts with another Yid of Hungarian descent. He responded with a story of his own - where his father's mother lost TEN children in various stages of pregnancy - before she traveled to Reb Shayelle and asked for his help. The Tzaddik gave her some Kotzko Tzikker - sugar cubes and told her keep it with her during the whole term, maybe to wear it like a Kimeya, I forget that detail now. She had four children after that, with this man's father the first of the four. I could be here all year writing about the mofsim, but you can save me from doing all that work by buying or borrowing (like I did) this sefer'l and reading how G-d name was sanctified by both Jew and, Lehavdil, Gentile thousands upon thousands of times over decades. Surprisingly enough, one of the marei mekomos that they bring is the famous עולמו של אבא, which I took out to look at what he writes and I was more then a bit disappointed at that Pressburger Talmid's take on Reb Shayelle, which is not really respectful - since he says that he wasn't known as Godol BaTorah, and all he basically did was prave mofsim and serve food to hungry Jews... which shows you that jealousy is a terrible thing, and that even Rabbonim can suffer from it.
Posted by Hirshel Tzig - הירשל ציג at 11:05 PM

Ah, you finally started using labels, so we will finally be able to search for terms like "cbt" barry gourarie and streshile

I'm not sure why I did it, it just jumped out at me, so I entered some info. I can't promise I'll do it every time from now on...

How did the pic of R'Shayaleh Kerestirer become an antidote to mice?
Btw, the owner of the Chuster Lokshen company,Mr Landau from Willy is an eynikel of R'Shayaleh

Who are the big ba'alei mofsim in today's generation?

Hirshel,
Regarding mofsim, their is a very powerful letter of the Rebbe asking his FIL the Friediger Rebbe to provide mofsim because in todays Kefira generation we need to show the Koach Hashem in our life. It is a letter that Liebel Groner put it out in public in some publication, have you seen it?

It has nothing to do with jealousy. speak to some old people that actually knew Rav shaya'la he was known to be a oived" not a godol. As I myself heard from one such yid that rav shaya"la hutzich g'plugt tzu farshtein a toisfes". Just because someone wasn't a gaon doesn't diminish his greatness at least not by us chassidim. Perhaps chabad is different.....

אוי לנו that today the general public judges someones tzidkus by how much he can "דריי א קאף" in learning, and how much of an act he can put on...

I can't really fathom how people are so shallow as to think that these things are all that matteres.

I can just imagine how much kavod many of the Rebbes of old would get if they walked into a shul today?

Is this what a Rebbe or Rov is? Just another version of a Rosh Yeshiva?!

The Rebbes of old were famous and beloved not for their learning or "act," but for the care they showed for a fellow Jew; the chessed they would do.

How many stories are there about Rebbes giving away their last kopek (cent) to a poor person.

i do not belive nor novel nor fiction.
these people with "first hand" stories were not even born at the time. reading this book i was shocked to what the chassidim of today are able to do, manufacture hundreds of lies and dreams and print those for the masses to belive.

even in his days it was overly done, to play with the mind of the simple yidden, there was a very heavy pr machine at work, no different from some rebbies of today.

i"m sorry for being so honest and blunt.

This seems to be a contradiction to looking to a Rebbe for predictions of the future and mofsim. See Rashi ad loc.

Anon 10:26 -
You probably mean the Reshimos etc back and forth btwn them.. I can't find it right now).

In "R'vos Mofsei" (stories of the Rebbe, published in last 10 years or so), there's a very geshmake "mavoi", where the author brings much on the subject matter.

What message does a book of mofsim impart?

To my feeble mind, your short synopsis leaves me with something like this: Once upon a time people prayed to God and understood that He would provide whatever is in their best interest. Now God is unreachable/unwilling/unable to provide but there is a fellow in the next town who can do whatever you would like.

I was listening pretty well to krias hatorah these past few weeks and mofsim were performed by Moshe Rabbainu in order to prove something, not to provide what God didn't.

Twisted is a gross understatement!

You bring to mind a story told about one of the Chofetz Chaim's sons. When he was asked to "zog ibber a moifes" from his father, he responded by saying "my father is the type of tzadik that listens to Hashem not the kind that tries to make Hashem listen to him!" When we ask for
חדש ימנו כקדם
we are asking to take us back to a time where the yidden genuinely believed in Hashem instead of wasting their time on any given motzaei shabboss talking about "sippurei tzadikkim" and other sorts of foolishness.

When I said: חדש ימינו כקדם I was just quoting the lashon of the pasuk non-literally to bring out my point, as many frum people, especially talmidei chachamim and rabbanim often do when they write.

Same goes for when I said: אוי לנו.

Lkwd guy,
As you admitted, you have a feeble mind.
You have proven true the maamar tzadikim that the nisyonos in emuna beikvisa dimishichicha will be so great that only emunas/sipurei tzadikim will be able to be maigin.
Your soul seems lost.

The chartumim made mofsim too to allow for the existense of bechira, lkwd guy, you chose wrong

This is a powerful RamBa"m to show the importance of telling and believing in Mofsim of Tzadikkim.


anyone could choose to which category he belongs.

lkwd guy didnt see it quoted in the new r chaim, so he's not sure he needs to take that din seriously, after all, voss far a pshat ken a frank zugen oif a rambam.

Anon 1:44
I did not see it in Reshimos, I remember that Liebel Groner gave it for Kfar chabad in the year of Gimel Tamuz

http://hayom.blogspot.com/
check out the deep lomdus, he hasnt spoken for 40 days and wants to know why he hasnt gotten gilui elyohu yet

"the old odverer ruv that just passed away, was also a Einikel"
(btw the way it's "ood-var")

the kerestier rebbi was equivlent to the todays toldos avrum yitzchok rebbi.

Listen i sat by the toldos a. Yitzchak rebbes tish for three years straight and althouge i must say its a varmer geshnake matzav with herliche singing and dancing but the rebbes torah leaves much to be desired and thats putting it lightly (aaas opposed to his brother the toldos ahron rebbe who is a world class talmid chochum).and while i consider myself a chosid of the tay i cant say his lack of learning erudition doesnt bother me.Lets be honest when i went to spk to him abt a inyun i knew in my heart that R Avrohom yehoshua could run circles around any points he brought up. But i guess waht are you gonna do thats a choosid! Or maybe not?