One of the few perks of maintaining this blog - other than interacting and meeting with so many fascinating people, of course - is that every once in a while somebody appreciates what you do, values your opinion, and wants to hear what you think about a certain subject/matter. If that weren't enough, an author or publisher will want you to read what he wrote and share it with the readers! Which is what happened here. We got the book so that we review it here on the blog. After several days of reading I finished, and can now share my humble opinion with you all.

For starters, Rubin did a very thorough job, going back several generations to find the roots of the Drizin family. Father, father's father, brothers, sisters, cousin, town Rov, and so on are all described in as much detail as possible, not much is often known. Mayore's Rov (which is why he was named Mayorer - from Mayore) was also an Oylimisher, as was the case in Chassidishe shtetlach all over Russia. Reb DovBer Pianko, HY"D was loved and respected by all, and considerable attention is given to the details of his death at the hands of the local goyim, who made him and example, as well as the mesiras nefesh - literally - that Reb Avrohom's uncle had to bring the Rov and a family member (I forget which) to kever yisroel. Even before getting to the story, much effort is made to credit absolutely anybody and everybody who helped make the book possible - from Zalman Alpert to parents and spouse, which tells you right off the bat that this work was one of thoroughness, and that what we have here is something that can be Oleh al shulchan melochim. I also think that the fact that the book was written by a rechter eynikel of Reb Avrohom makes it so much worthwhile; the love for the protagonist, the respect, even the longing for him, is evident in every page. 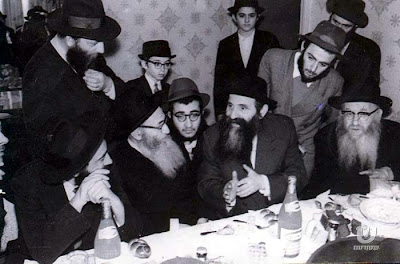 I'll leave it for now and post this as part I, since I'd like to get this review going and not wait for the whole thing to be done before I post any of it. It makes it better for all parties involved.
Posted by Hirshel Tzig - הירשל ציג at 9:36 PM

R Avrohom Mayorer was the Mashpia of the shul where I daven.He was the epitome of what a real chossid is all about.He was also a distant relation to our family. When he used to farbreng with us not a harsh word escaped his mouth.Even his musser was presented in the most eidel way. He never berated or embarrassed any of us in any way. Needless to say we took Reb Avrohoms verter tzum hartzen.He was a durch gearbet individual and the most eidel of personality. He is sorely missed.

Yeah yeah. & does Rubin mention in his book that for years the Rebbe was not gores him at farbrengen because he left his shlichus in EY to come to NY? At some point this changed. It seems like it was gradual, & eventually he was again recognized.

Of all the eltere chasidim who were around 770 in the mems, it was with Avrohom Mayorer who Reb Yoel Kahn hung out with the most, talking etc.

Hershel, I'm desperately trying to get someone to buy me the Rebbe Shayele sefer in EY but he can't find it in stores. Any ideas?

Who is the publisher etc?

PS: you dont have to publish this, maybe just add a comment here or in the original thread. Thanks.

Drizin also has paylishe yichus, is that in the book?

major sins off ommission in the seder hayachas

i spoke with reb avrohom many times , he always was bothersd that the rebbe never went to the reshab

What about the sefer??? please answer.

For a review like this they wasted giving the book for free!?

The author's father (lives in BP) is an eYdim by R' Avrohom.

I'm not sure of his yichus, but I know he isn't related to Rubin of Albany (who btw say they aren't related to the rebbishe Rubins; so it's still possible that BP Rubin IS dynasty-related)

Well, if he was bothered why the Rebbe z"l didn't go to the Rashab, why didn't he ask him? And if he did, wasn't he happy with the answer? There are a range of "interesting" reasons given for this, but I'm not sure if anyone reveals the truth on such.

It sure looks like Zelig Levin. Who are the others?

pnimiyis of ziy always was and always will be shemtivist. and g-d bless him for that.

even an academic using empirical criteria would conclude that this man was no chosid of the rebbe.

I can't say I'm totally surprised by the "nifred" comments here, after all, some people like throwing that word around. But I think we can all agree that Reb Yoel, shlit"a, is a mekusher, right? and as was stated before, who did he spend all that time with, and to whom did he send Reb Mendel Wechter to zap ohn hiskashrus? to Reb Avrohom!

yoiel became a mikusher after gimmel tammuz, the shemtivist would aver... converting a hungarian as proof for kashrus would have some russians up in arms. are you using vechter as proof of his devotion to the rebbe?

the separation makes itself evident through the motifs of a slew of other posts on the front page of your site, namely, s.b.d and his involvement with broin's muskateers; also, chabad's ridiculous demise into westernization and modernization, ala some cheap GQ party knockoff (read: "Basil" without soul brains or class...

cmon cant we get an ainikel ghere to elaborate on the ommissions in the yichus?

i asked r. zelig it is him