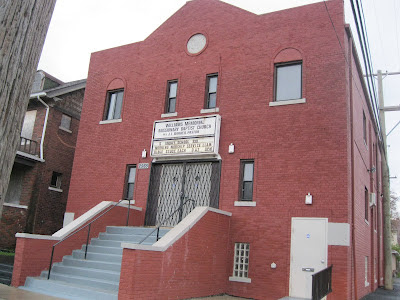 
Tzig, I read your post from years ago regarding the Stoliner shuls in Detroit and what has become of them, and here's some additional information:

First a bit about Stoliner chassidim in Detroit. The Rebbe Reb Yisroel Perlow ZY”A, known as the Yenuka, started sending chassidim to the US as early as 1880. Detroit was favored over other areas because it was easier to get jobs that did not require one to work on Shabbos. Stoliners organized a minyan/shul as early as 1905 in Detroit and one of the Rabbonim who served as Rov in their shul was Rabbi Yitzchak (Isaac) Stollman z”l. Reb Mendel Zeilingold (a Stoliner from Lutzk, who later lived in New York and then Yerushalayim) said over that the Yenuka once said; ווען מיר וואלטען געווען מיט צעהן יאהר יונגער וואלטין מיר געמאכט א נסיעה קיין דיטרויט". They say that at the turn of the century there were around 100 Stoliner chassidim in Detroit. The shul that you wrote about in the 2006 post was built by the chassidim themselves. Mr. Tzvi Strom is an einikel of Mrs. Chava Wainer, in whose house the “Detroiter” Rebbe was niftar. He remembers pounding nails into the floor boards on his way home after school in the ‘30s. That neighborhood in Detroit started going downhill in the 50’s. The decline was swift. Many of the older chassidim had died out and the younger crowd joined Young Israel etc. Few were left to care for the shul and the “chelka”, the cemetery area where the Rebbe is buried. Some say that the previous Rebbe, Reb Yochanan “shtelled avek" one memuneh to make sure that the shul would not be sold, or one version is, that it should not be sold to a church.

That story goes on to say that this man worked all the time to ensure this, He put clauses into the shul documents etc. But he was once hospitalized for a short period of time and came out to find out that it was too late. I also heard from an older chossid that the Stoliners would come every year and work on eitzos to keep the shul up and running. He said that there was a law at the time that a store within 2 blocks of a church, (not a shul) could not sell liquor. So there was one store 1 block away and another 2 and ½ blocks away. The chevreh went to the farther store and told him that the synagogue is costing a lot to maintain and it might end up being a church (which is what happened to many other shuls in the area), and that would result in the other, closer store being allowed to sell liquor and him needing to shut his store. The proprietor got very nervous and asked what he can do to help? The chassidim told him that if he helps pay for the maintenance of the shul then they won't need to sell it. The guy helped them out financially for a few years. Sadly, later on the Yeshiva in Boro Park received a phone call from the Detroiters that they are sending a large amount of cash for the Yeshiva. They immediately understood what happened, and they dispatched 2 or 3 people to Detroit and tried to “handel” with the buyer. They even offered him twice the amount that he had paid for it but to no avail. The buyer, though, was some sort of Boy Scout organization or something similar. It was not sold directly to a church. Brokenhearted the chassidim returned to New York. Either way, to say that the Stoliners SOLD the shul, and to a church nuch dertzu, is a fabrication.

Research is currently being conducted to try and find out more about the chassidim of that era, in Detroit and other areas across the USA. Anybody with information is asked to email stoliners.usa@gmail.com.

I have been to this "Church" shul. I drove by last summer just to see where the shul was. Theres still a Mikveh downstairs from what I have heard from the locals.

I used to go to the rebbes tzion once a month. it was always open, but this year I got a phone call from a chossid saying there was a lock on the ohel. I made some calls and the simin for the combination for anyone who wants is "HaBeGeD" like the oak park mikvah.

It sounds like letzonus but they say it's true that Stolin made a concerted effort to steer people away from referring to the Rebbe as the Michiganner.

Is the Stoliner legend Zaydee Pilchik still alive? He may be able to confirm it

by the way, there is also a Slonimer rebbe in detroit. the son in law of the divrei shmuel Harav Silver ZTZL. I think he davened in stolin too.

Reb Mosh'e Kassoffsky lived in Detroit in the late 19C/early 20C. It is my impression that my great-great uncle died there, a yir'e-shamayim l'gamri. He was the son of R' Avrohom Kassoffsky, the Slonimer manhig of Bialystok, and descended from the second child/daughter of the First Slonimer. His younger brother, R' Dov-Ber (aka "Barnet Kass")came to NY in the late 19C, as did his sister Tayba (married R' Avrom Sweditsky of Slonim; where all but one child was born). Tayba's daughter Rivqa lived in Detroit for a short time (c. early 1920s) with her husband Binyamim Meltzer. Several other children lived in Toledo and Mansfield. [I appreciate your wonderful project very much. Don't know if this info assists, but maybe it will fit into someone's puzzle.] Shalom u'vracha, Khiyyavrom Sheikowitz. bradgorm@yahoo.com]]

I heard from someone that joined the Rabbi on a visit tot the shul and takkeh saw the mikvah. He said that by now its no church anymore.

Also the Crabbe was very upset upon hearing that the YORSHIM OF THE OLD BOARD MEMBERS SOLD IT....

You forgot to put the "t" in zt"l after Rav Stollman's name. He was after all a great Tzaddik, Ba'al Shas and Ba'al Machshova. (Not to mention that he was the rebbe of the Steipler zt"l in the latter's youth.) I remember when I was learning in Bes Medrash in Tiferes Yerusholayim, one of the senior Benei HaYeshiva was learning "Minchas Yitzchok" on the Parsha and remarked, "Er Zogt Takeh Dvorim HaOmdim BeRumo Shel Olom".

My great-great uncle, Avraham Feldman . 1878 - 1958 owned a scrap metal business on 17239 Swift Ave, in Detroit. He hired people from Stoliner Schul, and regularly contributed a portion of his profits to it. It's nice to finally see a picture of it !! Now I'm looking high and low for a picture of Avraham Feldman himself .