for some reason we don't get to blame lack of funding like all failing NYC schools - which I guess is OK... 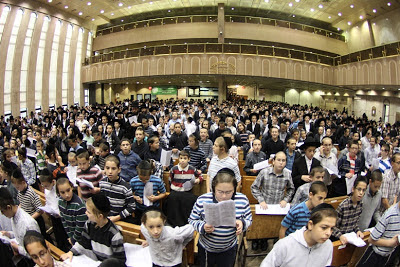 OTD'ers of the world, rejoice! somehow you now feel vindicated by the deep, dark secret that a website is reporting, namely that Brooklyn Yeshivos aren't up to snuff. OK. Very little details are given, just that Heshy Gelbstein says he can't speak English, a Crown Heights kid says he was never taught English in Oily Teyreh, and Libby Pollack says the City knows what's going on and chooses not to do anything about it. או שכן או שלא. Other than the screaming headline there's not much there, Sonja. Tell me something that I don't know. So now it's OK to leave your wife and kids and waste your lives, since you didn't get a proper education! ... If only I knew! So now what? we call in the bureaucrats and force the Yeshivos to change the way they've been working for 60 years? And of course we should cut whatever funding we give to those darn Yeshivos  - all they do is abuse kids and cover it up. We KNOW that. Seriously. What does a story like this do, Sonja, other than make lots of people look bad and maybe get you a promotion? But yet when it comes to failing NYC schools that get per-student aid of $----- annually all they have to do is complain about the lack of funding.... and they get a pass. As a follow up we now learn that Marty Markowitz is not gonna take the blame for it.... Which is good, I suppose. I always wondered what a Boro President's job was; I guess it's to make sure that Vizhnitzer boys learn their ABCs. And for that he gets a whopping $------ a year. Nit shlecht. Sonja's doing her job and getting extra mileage out of this shocker. "SovietSonja," if you will. But as far as looking inward we can be "proud that we've created so many disgruntled kids that sit around and look for ways to destroy their old schools, communities, and sometimes families.

No to disassociate myself from the rest of frumme Yidden; I do have to say that this was not the case with me and my alma-mater, Yeshiva Imrei Josef Spinka. Neither is it the case in all non-Chassidishe Yeshivos. In Spinka we took state tests all through elementary school and Regents in High School. Yes, certain books were "off limits," I guess, but I would bet that the same goes for other Parochial schools. The fact that you spoke Yiddish with your friends and at home didn't minimize the importance that was given to the 2-2.5 hours of Secular studies. Some schools don't emphasize it as much as they maybe should. OK. Just leave us alone already! Enough with the generalizing and painting with the broad brush! Go and expose the schools that get millions from the city and have nothing but dropouts and sub par performance from staff. See how they misuse funds and milk the system. The gall of these writers to nickle and dime Yeshivos that get almost nothing from the City anyway! But of course that will never happen, because Heshy Gelbstein didn't go to Public School, he went to UTA, and now is his time to get back at the staff there. So if it's not abuse it's lack of secular studies... Soon it'll be corporal punishment, היל"ת, that will be highlighted in some story. So it's really not about the schools or how well Chassidishe kids know how to read or add. It's about payback and revenge from disgruntled kids. And the more I see it the more I'm disgusted by it and see it for what it is!

Hirshel
The government gives noting for Yeshivhas,Chadorim why are they budging in to our affairs.
The food programs have no relation to education,the Yeshiva is just a center for giving breakfast for hungry kids.This centers are open even June July when there is no school. Its a total secular place , its illegal even to have a Bencher on the wall.... What do they give for a 5 year old chasidic boy, noting zilch.....Although there is some concept as Headstart for the 3 year olds which is also not educational
They give some money for security from Homeland BS,it has noting to do with education, they would do it for a Gym or any leisure place with a big concentration of Kids,to keep them secure.