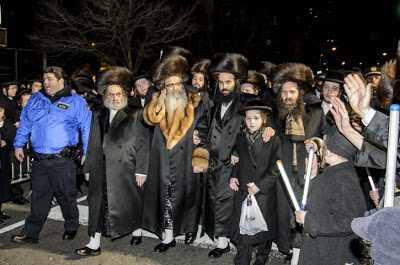 I know a philanthropist who used to deal in fur who offers rebbes to help them sell their peltz when they come shnorring by him.

Love the kid with the plastic shopping bag.

is this photo for real, or a anti PETA commercial?

can anyone recognize the people in the pic?
who's the guy to the right of the zali,lipa his brother?

the reason for chasidim to wear Silk, is, that it is from a worm, Tolaas Oinoichi, to show some humblemness, so how does it match with the animal fur?

It took more animals to create that coat than usually perform at that other (Barnum & bailey) circus.

Hirshel, look at the comments and realise that posts like these don't benefit kavod to Chasidus. Vos felt dir ois?

KlotzKashe
"The hat the FR wore wasn't fur? "
it costed a half a rubel

after reading mishpacha this week and seeing this, i understand HT's problem. the BS propaganda that the zallis put out about him is way over the top. it's not the fur that stinks, it's the whole package. This guy was going nowhere quick, got shipped out to EY to get him out of the way, and then the gabbai gets pissed at the crown prince and brings him back from obscurity to be his puppet.
it makes you gag that this passes for chassidus today.

"it makes you gag that this passes for chassidus today"
--------------
Almost all כאסידעס today is about clothing:white socks ,black socks, hoizen in zocken, all one big chitzoiniyes.
Because there is no pnimiyus.
Nada.
And that's the matzav with "normal" chasidesen.What about the breslov and chabad versions where reality is totally lost????ד האכאסידעם על העליונה

OK everyone, stop with the shtusim and look into your own backyard and you'll find what to fix.

Amazing how he travels from his Brooklyn base to Eretz Yisroel to spread his narishkeit.
Where was he when missiles were falling on EY?
Who is he to go against the Gedolei Hador who reside in EY and proclaim that it is a chiyuv to vote.
Let him go back to Brooklyn and continue spoending tons of money in Goyishe courts fighting his turf wars with his brother.
the sheer hypocrisy is mind boggling

I don`t know personaly the person in the fur coat, but the way they portay him "larger than thou", i watched his body language on youtube as he spoke in jerusalem so lame and dull, he so does not electrify the crowd.

oh! he is so not Bobov. so third class. this is so full of hot air, that g-d i don`t belong to that fighting jew-hating satmer group. its so opposite of the holy derech of Bobov.

" Fox in a Cage said...
the reason for chasidim to wear Silk, is, that it is from a worm, Tolaas Oinoichi, to show some humblemness, so how does it match with the animal fur?"

Todays bekishe's are made of polyester, which is a petrolium byproduct. In essence its is muck that comes up from the earth in Saudi Arabia. Tolaas Anoichi?