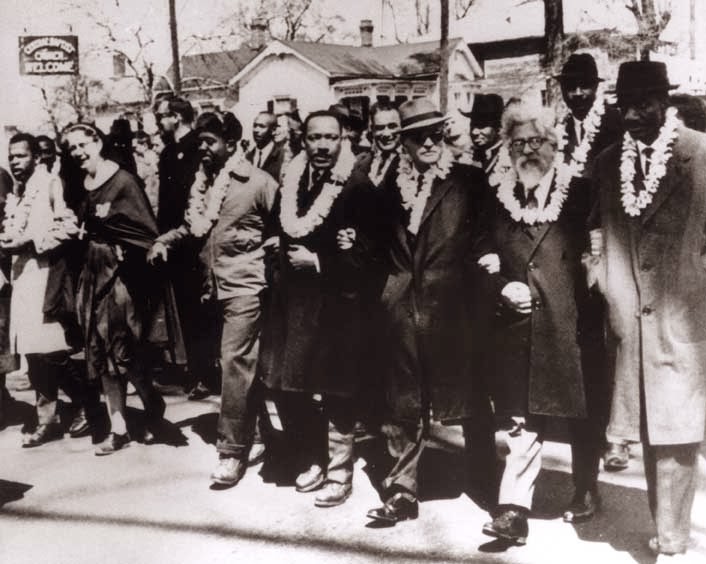 Ajh was a Chad bdora in Baal tashchis of a rebbish kind and a frum yid. YU had no shteller for him so he slid and slipped all the way to the bottom, nebach.

1. Wow ! don't blame YU for ALL of Judaism's problems. AJH came to the US to HUCA in Cincinatti. They brought him here. Even in Germany and Poland he was affiliated with Reform(Hochshule ) and secular Jewish academies. He had no affiliation in Germany or Poland with Orthodox Judaism. After HUCA he wanted to go to JTS .
Actually at YU he would have to teach and teach people who knew texts and Hebrew, not abstract Midrashic and Aggadic concepts.
Heschel was an observant Jew although I never heard him say or did he write that he was an Orthodox JEw.
The rebbe in a letter to Prof Velvel Greene or Dr. Paul Rosenbaum of Teachers College calls AJH a frum person. Good enough for me.
Next this picture is misleading as AJH showed up for the end of this march and the photo ops. He di not march the whole length as did other Jewish clerics
AJH was a complex person a Banshak a philosopher a publicist a shtikel a showman . He was very astute and his book in YIDDISH on the Kotzker is fantastic His speech in YIDDISH about East European Jewry of about 25 pages is a major statement of what it was all about.
Yet in later years he was more interested in Ecumenism with the Catholic Church and the civil rights movement.
Like other Jewish leaders of the time he was a very complicated person .
The late Skverer Rebbe of BP told me that after his marriage he lost contact with his original svivah. Although I gather his relatives were still in touch with him

schneur
" He was very astute and his book in YIDDISH on the Kotzker is fantastic"
it is a beautifully written book, he writes that he still hung around some old kotzker chasidim, but too many things are interpreted the wrong way, as the differences in Hashkofa of Izhbitza and Kotzk.

I remember seeing years ago a article of Heshel very well researched on Reb Brech Kosover, he had some manuscripts of Reb Pinchas Koritzer and others,
I wonder where it is today ? maybe by his daughter.

where can we find the book and the speech, both in yiddish, that you mentioned

His relatives tried getting him in to YU...

AJ Heschel on Kotzk at the 50th anniversary of the Jewish Public Library Montreal - Oct 11,1964

shoite ainer. YOU embody why Rav Shach ztzvk"l was apposed to your reading rambam like you do tanya. did you learn the whole perek, or just one din? did you learn all the nosei keilim, any? by your sinas talmid chochom question, i can tell you didnt.

you are motzi laz on all talmisei hakollelim, chabad included. do you kmow how much the average kollel pays? do you realize that it is almost impossible for anyone to live off of a kollel stipend. which means that virtually everyone in kolel is eather eating kest, or more likely, doing something on the side to make a couple bucks and is learning torah mitoch hadchak. kan shevet levi bist du nisht! afra lepumach! mai ahanu lei rabonon yid. go have a talk with your mashpia, if you have one.

anon, the Rambam himself was a kolel yungerman most of his life and was supported by his brother.

Really? Where's your mokor to that? I haven't gone thru his toldos recently, but it's only mistaber that he got paid (and/or definitely royalties) for serving as a Dr, especially to the Sultan's court?

He may not have charged for general advice, but I'm sure compensation came in the medical dept.

Will all do respect, all I did was ask a simple question. I am trying to understand something, and you don't need to ridicule me. I also learned where Rambam writes not to be embarrassed if you don't understand, but to keep asking.

Rambam was not Misparnes Min Hatzdokoh? Firstly, my understanding is that he was a silent partner in his brother's business. Second, even if he wasn't, I don't think Rambam is negating a Yisochor-Zevulun agreement, but dependence on Tzedakah. Finally, the lifestyle of Kolel people that I've seen - though certainly not lavish - is well beyond what Rambam suggests for successful Limud Hatorah.

In other words: What is the basis for learning Torah while making yourself dependent on Tzedakah?

(Historically, Talmidei Chachomim worked, or their wives worked, no?)


(Historically, Talmidei Chachomim worked, or their wives worked, no?)

As they do today.

Who gives tzedaka to yungeleit? Who do you know that just lives off tzedaka? You sound jealous

Is your issue that you don't fargin yungeleit not to have to struggle and be poverty stricken as they once did?

The Rambam only was a doctor at the end of his life when he went to Egypt. He writes in his famous letter tht his brother supported him.
anon, you are so silly you deserve a knip on the bekel. which yungaleit in America get tzedaka from anybody? which yungaleit live "lavishly"? cut it out you cut-up.

Dovy, thanks for the knip.

I said NOT lavish but well beyond "pas bemelach". Every day there are appeals to support Kollel Yungeleit etc.I am asking simply how this fits with the Rambam. Believe me, I Fargin fully their olam hazeh and olam habo. But what is the source in Torah for thousands of people (here or in Israel) to be learning full time, and relying on Tzedakah?

Tomchei Shabbos is tzedaka, a kollel is talmud Torah.

There is no Kesef Mishne on Hilchos Yovel V'Shmita 13;13

Leo, I looked. It's a very long Kesef Mishna, and in small Rashi letters. Could you summarize for us?