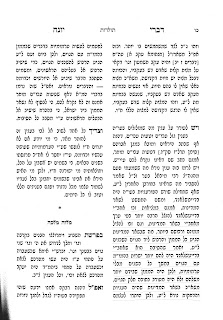 It seems like Reb Michoel Ber Weissmandl wasn't such a Satmarer after all, at least when it came to finding reason within some of the tragedies that the Jewish people bore witness to. While the Satmar Rebbe blamed the Tziyonim for all the ills that befell the Jewish People during WW2, since it was in essence a revolt against G-d, RMBW blamed even the anti-Zionists. He blamed the Yidden who weren't honest in their business dealings with Goyim, which is why they got what was rightfully theirs. The word scary comes to mind, since he's essentially excusing the looting and reacquisition of Jewish property done by the Poles, Magyars, Ukranians, Lithuanians and any other local Goy. I had this as a joke in private conversations, where people would say how the Goyim allowed for this to happen, but never as an official excuse by a Rov BeYisroel .

Reb Yonah says that we can be MeOrer those that are lenient with regards to Gezel Akum and To'us Akum, that although the Mogen Avrohom says that To'us Akum is Muttar, still it's not considered LoChem, yours. We can allude to what I heard from Reb Michoel Ber Zt"l when he tried to explain what happened in the last Churbon, that although the beginning of the Tzores was in Germany (birthplace of Reform - HT) and from it spread to other countries, still we see that the Yidden in Germany managed to save themselves and to a great extent their belongings and holdings as well, whereas in other countries, in those places all of the belongings and holdings eventually made their way to the local Goyim and to the German conqueror. - HT) Why was this?

RMBW said that the reason this happened was because the Yidden in Germany were honest in their business dealings with the Goyim, they didn't rob or steal, therefore the money and property that they had was really theirs, it wasn't attained by dishonest means, so there was nothing that belonged to the Goy. Whereas, in the other countries, where poverty was so great, the Yidden in those were Mattir for themselves to be "lenient" sometimes when it came to dealings with Goyim. Therefore when the Tzores started Hashem made it so that the property that was in Yiddishe Hent that should've belonged to the Goy returned to its "rightful owners!" - VeHadvorim Noroyim. Maybe we can say - says Reb Yonah - that this is what is alluded to when the Mogen Avrohom says that although To'us Akum is Muttar still it's not yours, LoChem, because in the end all that doesn't rightfully belong to you - that you didn't get via honest business practices, even if it was from a Goy - will be returned to its rightful owner.

From this we can see how careful we need in all of our business dealings, because we can never know what the end result can be, and in heaven there's a Cheshbon for everything.

Tzig, ferdrei nisht zayne yoitzres. He was trying to explain why the German Jews got relatively better treatment, not why the Holocaust happened. He doesn't need you to extrapolate on his behalf.

Based on the industry you have listed in you detailed profile, I question your sincerity on this issue. And if you are sincere, I don't want to be your client.

Peleh ployim. Unbeleivable. Where does Rav Weismandel say this? I would like to see it inside.

G-d will provide, with or without you being a client. But I thank you nevertheless. Although Accountant's don't deal with other people's money as much as they help you keep more of your own, i.e. pay less tax.

Is Reb Yonah not enough of a source to say that he heard it himself?

if you would have paid attention to the comments in your original post of October 10 you wouldn't have woken up so late!!!!! instead of knocking it
heres the quote again

Anonymous said...
take a look at his reason for the holocaust and see footnote on bottom from chasam sofer and also from R' Yonah Furst zt"l and we should rethink our position of today!

What is the point of your post:Are you bringing this as an interesting insight or are you trying to mock R'Yoineh?

I'm tired of your Chbsker mockery.
There is enough unadulterated nonsense in your rebbes toirehs to suffice for lots of mockery.In fact his toreilech are not to be found in any beis medrash kim'at, besides Lubavitcher shuls.Why is that?Well the oilem thinks there is loads of nonsense there.
So, chaver meyneh, stop making fun of others when you and your ilk and your Meshichisten are the absolute laughing stock of the World.
Of course your pea-sized mind has been programmed to say 'they hate us'.We don't hate you.We have rachmonus on you.While you are busy with being 'mekarev' you have not noticed that you have become totally 'mechutz lamachaneh'

At first you asked me if I was mocking Reb Yoneh, then you decided not to wait for my answer, and decided for yourself that I was mocking! Then you rambled about the Rebbe's Torah. You really think I should bother with an impatient one like yourself?!

Thanks to my BP education I can read and understand basic Loshen Keydesh. Although it isn't as clear in this shtikkel from Reb Yonah it is mentioned in Ish Chamudos that the Churbon came on Aveiros Bein Odom LaChaveiroh. There they bring that MiPi HaShmuoh and they add the story with Reb Yonah as additional proof. He also happens to mention the vort that the Yidden were punished for the Machleykes Reb Yankev Emden and Reb Yeynesen Eibshitz, that just like the Asoroh Harugei Malchus were punished for Mechiras Yosef, and the punishment for Nov Ir HaKohanim was BiMei Chizkiyohu, so too here.

I have not seen that Ish Chamudois. But here it's clear that he's saying that Gezel Akum is very important and german jews were able to be nitzel in that merit. You can't fiddle with that logic by turning it backwards and saying that non-German jews got it worse because they stole from non-Jews; first of all, that wasn't author's intention. And second of all, if that method be applied to certain other sources, well, then you'll end up with postings that will very much not be to your liking.

I'm not fiddling at all, it's quite clear from his words. I'm not sure what the "other sources" that you're referring to are. By the way, me not being a German Jew I guess puts me in the same boat, so I'm not vindicating myself at all.

It's not about vindication, it's that I get very irritated by those causation statements, Tzfas quake happened because of this and road accident because of that and Yidden were killed during the WW-II because men hot geredt bei hoiche shmone-esreh. Those memres are ridiculous and stupid and world doesn't needs another one.

i happen to agree with u'n' that genearally its very unhealthy to be G-ds lawyer and to connect all calamities with specific transgressions.
there are 2 exceptions. when something happens to a person he is obligated to search whaat he may be lacking ( one can only do it with oneself and not with others ) or if a gadol explains to people why a particular disaster happend - like the rambam says its forbidden to think that its a coincidence but one must do teshuva

So now the two month course bookeeper has been upgraded to 'accountant'.Nice.

don't you just love it when losers base your life on the failure that is theirs?

Sorry, buddy, I did mine the right and long way. Two and half years, 3 days a week of courses, often 6 hours daily and 17 credits a semester, and 3 summers too. So please.