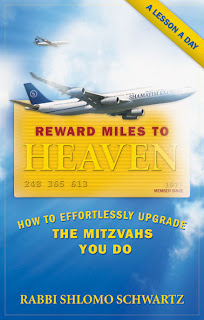 In conjunction with (actually mostly by) Chabakuk Elisha:

I realize, based on my post reacting to contemporary Jewish publications that I'm probably in the minority – but when Hirshel sent me the link to THIS book I almost fell off my chair. I'm sorry, but there is something fundamentally unspiritual about an approach which covers up all divine mystery and human spontaneity like a cement truck.

I don't know the Rabbi that wrote it, but really, books like these are what reinforce the notion that there are more than small differences between the different strains of Yiddishkeit, and these folks and I are just different. The idea of the book, namely appreciating the mundane day-to-day activities and seeing them as Mitzvos, isn't the problem. That's fine – even laudable. But the latter part is what drives me insane. Is this a joke? My G-d! The idea that we're building a portfolio for the world to come is nothing less than the death of the soul of Yiddishkeit. And while I guess that's fine if you're not into soul; but for Jews that ARE into soul, books like these are like a stake into our hearts. It's such a completely different message, such a completely different Judaism, such a completely different purpose of life! And it's one that runs directly counter to the work of the great Tzaddikim who worked so tirelessly to insure that Yiddishkeit remain a body WITH a soul!

At first the book looks like a very good and helpful tool. He brings the Sefer HoIkkarim that says that one Mitzvah with Kavonoh is more than a multitude of ones done without, and that just thinking beforehand that we're about to do a Mitzvah greatly increases the amount of Mitzvos you do properly. Were he to end there, this book would be a welcome addition to anybody's library; but once he starts with the "Airline Miles" he loses me, and I'm sure many others as well. He reassures the reader that doing Mitzvos for reward is "no sin," it's just that "Serving without expectation of reward is simply more exalted." The author understands that many of us are hesitant to embark on this reward program, and that they've never heard of doing Mitzvos for reward only, but he reassures us all: "If I promised someone a billion dollars for shining my shoes, for example, he might be skeptical, even if I proved that I was serious. A billion dollars is just too good to be true! For people who cannot comprehend the rewards of the World to Come, it might help to contemplate the more immediate, and therefore more believable, benefits of performing mitzvos consciously."

I understand the concept of mitoch shelo leshmoh bah leshmah. But emphasizing the shelo lishma? Isn't that a bit much? Is that even Judaism? I really don't know. I don't know who is attracted to such Judaism, but I'm willing to admit that some may be. Is our focus supposed to be on the rewards package after checking out of here after 120 years? This entire premise just pushed all my buttons – am I a child that I must be tricked into being a good boy? Is Yiddishkeit some kind of a game all about collecting the most brownie points? I think that reward gets too much airplay. I can just see it, "Well maybe I should smile at this old woman and say hello after all, you know I will have more of a reward in Olam Haboh, so it really is in MY best interest to do it." I think that all this emphasis on Olam Haboh has become confused. Friends, the pot of gold at the end of the rainbow is not what it's all about – not even close. Sometimes, we shake that carrot in front of our more base elements when absolutely necessary, but if we focus on it too much we become anything but an Am Kadosh. Anything but a G-dly people. Let's take the concept of mesirus nefesh. Now, generally speaking, this is not an exclusively Jewish concept – in fact, some of our best enemies are really into their form of it, They're also known as "homicide bombers". In fact the reason for this warped idea is specifically because those folks live in this paradigm of the "he who has the most points at the end of the game wins." But Yiddishkeit is not really a "next-world" religion, farkert – we're a "this world" religion, and our purpose is simple: "laasos lo Yisborech diroh bitachtonim." That's the goal, not what we've got in store behind door number two.

We are so very low today that we need to borrow Christian concepts in order to motivate us to do a mitzva. I share your horror. Nevertheless, some buyers of this book will do or improve on a miztva, albeit for self serving reasons. There will be a spiritual vitality as a result of acruing miles, I mean doing a mitzva, that hopefully will give the individual the strength/ability/mitzva epiphany to tap into G-d and his mitzva lshmo and perhaps shed this phony philosophy.
I read a story by By Dr/rabbi twersky who said over a story about another psychologist that he saw at a professional gathering. His collegue periodically used his thumb and forefinger, and pushed up the sides of his lips and held it there for a few seconds so that he would create an artificial smile. When R/D Twersky asked him about his bizarre behaviour, he responded that although the motivation to smile is artificial, the very act of smiling brings down all the physiological reactions of a natural smile, and boost ones spirit, and creates an easier pathway for the one who is not jubilant to more naturally rejoice.....

If that tickles their turtle, so be it.

IMHO, most of those growing up frum haven't gotten anywhere unless they freied out somewhere midway.

R Elchonon Wasserman HY"D wrote: All Torah leaders have Daas Torah to a certain degree. Some have 50%, others 25%, etc, while the rest of the person's mind is not Daas Torah – it is perhaps business daas or other people's opinions or some other type of understanding. Pure Daas Torah is only found amongst gedolei Torah who have cast off the transient vanities of this world and are loyal exclusively to the Torah perspective. (Kovetz Mamarim)