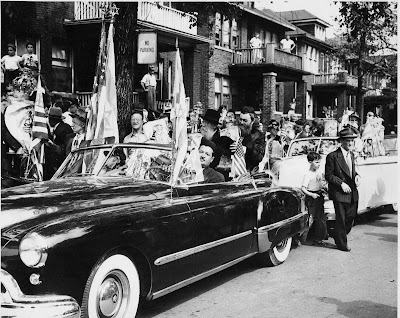 
We look at today's Rebbes, and we see how they've basically re-invented themselves. Although we talk of the Heilige Ruzhiner as the exception to the rule of his times, today the Rebbes have all said "Ich Bin Ein Ruzhiner." At least when it comes to the "Malchusdige" aspect of it. With the expensive dishes, and made-up homes, with the trips to Switzerland, and the grandiose Simchos, nothing is simple anymore. However, what we do see today is, that while in years past most of the Rebbes hosted people in their own homes, with the Rebbetzin slaving away for days preparing food for all the guests, today that aspect is gone too. There may be an Hachnosas Orchim thingie going on, but it's impersonal at best. Rebbes are very afraid that people will see that they're human after all, and that maybe they like to eat the supper leftovers from the pot on the stove just like us normal people. Yes, yes, I know, Lubavitch, too. OK. Who started this new seder? was it the press, the fact that they cover everything the Rebbes do? I don't know.

Take a look at the picture we have here, brought to you, as always, by הרוצה בעילום שמו. This is a Hachnosas Sefer Torah in Detroit in the late '40s or early 50s, at least that's what the car tells me. The two gutte yiden riding in the back of the convertible (!) are Reb Moshe'le Schneersohn-Twersky of Tomoshpol (l), who was a 5th generation descendant (ben achar ben) of the Alter Rebbe and was Niftar in Crown Heights in 5719, and Reb Yosef Benzion Rabinowitz of Arel-Brezna,(r), who's holding the Sefer. Reb Yosef was an Eynikel of Reb Gedalia of Linitz, and a Tchernobler Eynikel too. That's where the Tomashpoler Rebbe comes in here; he too was a Tchernobler Eynikel, a grandson of the Cherkaser. Reb YBZ was Niftar in Tel Aviv in 5728, I'm told. The Rebbes of today would almost not want the whole Hachnoseh ceremony if that's the way they'd have to ride, like a couple of teenagers having a good time cruising around town. And the flags! my goodness, look at those flags! In the old days the Rebbes would ride around in open buggies and in convertible automobiles, the ones with the tops down. It wasn't a Pechisas HaKoveyd for them either, they were quite content. Today everything is Achshir Doroh.

PLEASE PLEASE VISIT THE AMSHONOVER REBBE IN BAYIT VEGAN- no hoif, fancy plush office or waiting room- everything takes palce in his dining room with his chidren and eineklach playing underfoot- 24/7- he wears a simple coat and hat and travels in a broken van-till recently on the bus- walks his mother home every night and plays with children in front of chassidim..

the Amshinover is the last Rebbe from the old school, I believe the sitra achra doesn't let him daven in time, if not the whole of klal yisroel would be at the door of this Tzadik Hador, and all the falsehoods would evarporate

thats old glory flying proudly. some people had hakaras hatov to the usa

Where can I find out more about the Tomashpoler Rebbe? Thanks a lot in advance.

What? No Magen Dovid flag?

This is a fascinating picture, but so hard to see detail. Can you please upload a larger version of the photo that opens upon clicking? (I know clicking opens a larger one; that one is also still too small.

I do not have the pic in a bigger version. sorry.

While we are on the subject of bigger pics -

You once posted an amazing picture of the Lubavitcher Rebbe Farbrenging in the 50's with Shlomo C. (V'Yesh Omrim Eli Chaim) seated two seats away from him. That was really tiny. Do you have that one (or a link to it) any bigger?