If you're wondering what happened to the previous pictures, and why I suddenly deleted them, chalk it up to me being too much of a nice guy. I worry too much about people's feelings, and they know it, they take advantage of it and me. So I removed them. At least for now. Something about 50 year old pictures "belonging" to somebody. Nonsense, really. I don't know why I allow myself to be railroaded like that. But since פטור בלא כלום אי אפשר, we do have somewhat of a consolation prize, possibly a never-before-seen picture. 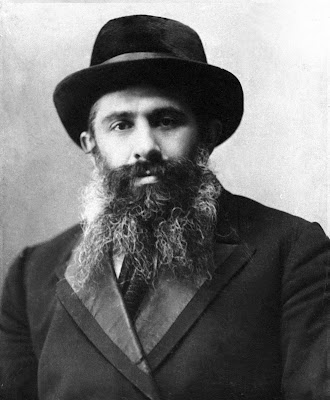 The current Chernobler Rebbes in New York and Bnei Brak are the sons of Reb Meshulem Zusia Twersky, zt"l, of Bnei Brak. Reb Chaim Yitzchok was the son-in-law of Reb Shayele Halberstam of Tshechoyv, known as Reb Shayele Tshechoyver, hy"D, the youngest son of the Divrei Chaim of Sanz. Reb Meshulem Zusia was also a mechutan of the current Bnei Braker Vizhnitzer Rebbe, tzu lange yohren, his son Reb Srool'che is married to RMZ's daughter. A Viznitzer Chosid once told me when he went to a tish of RMZ he was surprised to hear him sing the Sanzer Shalom Aleichem niggun Friday night with a Russian/Litvishe Havoroh. RMZ was a Talmid of the Chabad underground Yeshivos, and later escaped to Poland to his zeide, Reb Shayele, hy"D. 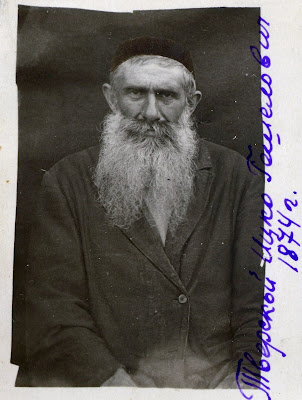 Today's Chernoblers are the grandsons of Reb Chaim Yitzchok. Judging from the pictures here they seem to have reinvented themselves to a degree, at least as far as the external trappings are concerned. They look almost like a typical Galicianer Rebbe; maybe that's the Sanzer influence. Reb Chaim Yitzchok was arrested in Kiev and first sent to Siberia and then tried again and sent to Kazakhstan, where he passed away. The picture here is from his KGB file from Kazakhstan. The file states that he was online for something and someone overheard him say something against the government so we was sent to Kazakhstan for 10 years. Only one photo existed of him till 2 months ago. The new photo is shortly before his death.
Posted by Hirshel Tzig - הירשל ציג at 11:51 PM

In the latter picture, the hat looks painted in, no?

well well his havara was not just stam Russian.

1. Reb Meshullom Zusha I was told spoke Yiddish and Hebrew with a shtikel White Russian oysprach.
2. When I was close to the Skverer Rebbe of BP Rav David, I met other members of that family who had recently arived from Russia. I even shared some of my good Englsih cigarettes with these nice people.3.
3The legitimate Chernobler rebbe was rabbi Yaakov Yisroel Twersky ( I recall reading that he left Russia with the Rayaatz)of BP who had a besmedrash in BP "und keiner hot sich nit interesirt in ehm " and the BM was usually empty.
If you don't have long peyoth and speak Galicianer Hungarian Yiddish you won't make it in the new chassidic community. Unless you are the Gerer rebbe.

So explain this to me please. If they would walk around with a baseball cap backwards, and shorts.... oh, only in der vochon, and a Kapotte on Shabbos.... That would be to your liking?

RMZ didn't escape to Poland. At age 15 he went to EY. He later went to Poland to spend time with his Zayde.

Tzig, did you know that reb Chaim steins brother inlaw is a chabadker from kfar chabad. An alter schochet by the name of reb Elya Zaks. Reb chaims wifes (whos levaya was yesterday) maiden name was zaks. In fact reb chaims mother in law came from a very chashuver lubavitch family.

funny you should mention that. I remembered hearing from my father ZGZ about RCS's shver, and I also knew that Reb Mottel Shusterman from CH was his cousin. (IIRC)I didn't know he had a shvogger in KC!

Thanks for that tidbit. Now if only somebody could write that to the newspapers so that they put it into the obits.....

Once we are on the topic did you know that Rav Yakov Kaminetzsky's mother was a nee Futerfass!I spoke to a guy Zalmanov from CH who was close to R"Mendel,and he said if they were related he would of talked about it

IIRC RMZ's BM in BB was called Divrei Chaim no?

it was. He was a Sanzer with a Chernobler name.

The reason for the Hungarian / Galitzianer Havoro is because the Chernobler Rebbes of Bnei Berak, Boro Park & Ashdod all learnt in the Vizhnitzer Cheder.

RCS's brother in law was like one of the first five people to move to KF. he hasnt left since. he looks like he a lubavitcher from 100 years ago. he still wears a kasketel and grows his own chickens which he shechts himself. he father the litvaks of all litvaks.

So who was Reb Chaim Yitzchak - not his shver, not his son, who was he? a grandson of Reb Aharon Chernoblyer? Who was his father?

once again a crude yarmulke is photoshoped on his head. MORONS!!! people who do this show die.

finally something interesting!
thanks

I don't think the yarmulke was painted on.

tzig, stick to what you think you understand.

Firstly - I suggest a reading and writing course to improve your spelling.

Thirdly - It is probably a Kavod for this Tzaddik to not be shown with his head uncovered. Do you really think your fellow jew should DIE over this or they deserve to be called names?

"I don't think the yarmulke was painted on."

Tzig, you cannot be serious this time... It is like claiming that the man on the picture doesnt have a beard...

thanks to Google Search - you can find the cache and retrieve the fabulous pictures of the Rebbe cutting wheat.

The picture was just recently discovered, and was not taken from some frum publication, so there was no photoshopping involved. Why would he be allowed to have a full beard, but no yarmulke? This was in forced exile!

The hat certainly looks like the real deal to me. Even an amateur like me can see the shadow that the hat brim casts on his face.

For those who care:

Reb Chaim Yitzchok was the son of

I am not sure of the point of all these comments.

You are a bold faced liar! I personally asked Rabbi Svei from the Crown Height bais din and he told me that his father died when they were very young in Russia still and he does not know if they are related!
Iirc correctly he may have even asked R'Elyah who did not know either
Whatever the case they are surely not first cousins or even close cousins!
Shame on you for lying!

To anonymous 3:03,
Sure Tzig knows that R'Mendel Futerfas was family with R'Yaakov Kaminetzky, he even posted a pic on the blog of R'Mendel, R'aVremel Shemtov(Mendels nephew)and R'Yaakov when they visited him in Monsey, I believe.
So R'shmuel Kaminetzky and R'Avremel Shem Tov both of Philly are family.
Tzig,
Why would newspapers write about Rebbitzens Steins brother?What relevance would it have in a hesped?

Schneur
Did the chernobler rebbe of BP have children?
When did he die?
Did he go to the old Skverer?
Who is the chernobler Chaplain of the hospital?
I think they are Leviem,his sons were Skverer chasidim until they switched to Rachmistrivk

I believe the Chernobler of BP had children who were'nt rebbe material.

R' Chaim Halevi Twersky's maternal grandfather was Chernobler Rebbe of Brownsville. His father (IIRC) was never here in America and he was raised by his grandfather.