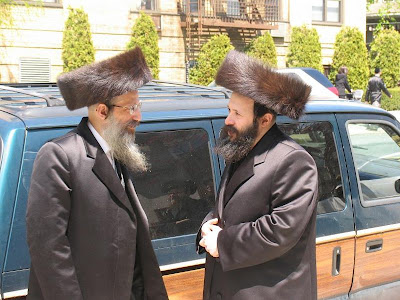 The folks in MatzavLand are excited!

In Israel there's great excitement, especially at the Yeshivah on the Hill in Bnei Beraq. A great scholar is coming from thousands of miles away, and will share his thoughts on the Talmud and its commentaries with the students there. Not that there's been a lack of Torah scholars there; they've had the greatest minds of the last three generations there, toiling in Torah, often forgetting about the physical aspects of life for years, and only focusing on their studies. Giants among men, they've been keeping the flame of the Torah alive there even in times of crisis and war. One might even say that were it not for that lone outpost Torah in its purest form may have been totally forgotten among the People of Israel. Names that are today legend all walked those hallowed halls and disseminated the wellsprings from within that vestige of hope. Harav Yosef Shlome Kahaneman, Harav Shmuel Rozowski, Harav Dovid Powarski and his son Reb Berel, Harav Shlome Berman and others, were it not foe the Harvard of yeshivos we might have never heard of them.

Why then is there a special buzz there these days? Who could create that excitement if all the great ones were there and most novella was already expounded upon there? It's a Chassidishe Rebbe! Yes, my friends the Bobover Rebbe, the "Rebbe the Talmid Chochom" as Rav Chaim Kanievski calls him, is coming to the Yeshivah to give a shiur kloli at the annual Yarchei Kallah tomorrow. In Israel, where everything is historic, they're very excited about it, and a very large crowd is expected to be on hand to see what this man can do. Not since the days of the Vaboylniker Tzaddik, when the great gold Aron Kodesh would somehow give credence to his bombastic, divisive words, has there been this kind of buzz. Truthfully the pressure must be tremendous on Reb Mordche Duvid, being that he somehow represents the entire Chassidishe world since the Baal Shem Tov himself. Somehow he'll vindicate them all and abolish the stereotypes if he aces the test that the once-mighty Ponovezh will put up for him.

We spoke about this last year, When the Satmar Rebbe was called to Lakewood's BMG to give the keynote address at the 25th anniversary of Rav Schneur's yohrtzeit. We thought that it was weird that the best they could do at such an auspicious event was to bring in a Rebbe, albeit a Talmid Chochom, to speak, when they could bring one of hundreds of his Talmidim. We've also discuused how Chassidim in general have this inferiority complex when it comes to learning, and that they always need to prove to the Yeshivishe Velt that they too stress Limud HaTorah and not just food and drink. So they bring in Litvishe Roshei Yeshiva into their yeshivos - often making them change their Levush to conform - and try and make Talmidei Chachomim out of their boys. In some cases it works out, and in some cases - like Reb Gedalia Nadel and Vizhnitz - it doesn't. The Litvak opens their eyes a bit too much and gets them to rethink their belief system a wee much.

But now it seems like the tide has turned just a bit. For the second time in a little over a year a Rebbe has been invited to present a shiur at a very important event, when the eyes of the whole yeshiva are upon it. Many former Talmidim, many of them zeides, come back for a few days of learning. In the Yeshivishe media the Yarchei Kallah is seen as time of policymaking - similar to Shteyedige Torah in Belz - and is widely reported about. What does the fact that they took a Rebbe to deliver the keynote address say about Ponovezh, have they too lost their way? Or is it all about money? did Freshwater pay the Yeshiva for this zechus and they couldn't refuse? Time will tell. But either way, whether it was for lack of anyone better, or for a promise of a couple of bucks, the shiur to be given tomorrow tells us a lot about the situation. Maybe they're tired of the same old shiurim and want to see what a Chassidisher can bring to the table? No matter what, this looks to be a very momentous ocassion, and folks everywhere will be looking forward to this. I just hope the Gabbai knows enough to sit down at the shiur, and not make this into a spectacle by standing there next to him like some Royal bodyguard.
Posted by Hirshel Tzig - הירשל ציג at 11:34 AM

There is also the 'cat playing piano aspect of it'. It is not becuase of the supreme greatness of Mordche Dovid that there is such intrest. There is also a novelty factor " A rebbe in Ponovich'!!

It might be that some of the top Bochrim in Ponevitz are Chassidish, and the Yeshiva is doing this on their behalf. Either way, I'm sure it gives those chasiddisher bochrim who learn there something to be proud of.

Maybe I am naive but I believe that there is a new wind blowing in Ponovizh, that the dais in front of the golden ark is not a springboard for international political events just let the yeshiva take care of torah as Reb Shmuel and Reb Dovid had it.So let it be a rebbe or whoever, its torah and nothing else.

it proves again and again that Ultimate Divide that lubavitch is preaching and promoting is not accepted among religious Jews,
Frum Jews believe that the rift between Chasidim and misnagdim whatever the rift was is irrelevant in todays fargrebta velt .
no wonder you are disappointed another Shtus that lebavitch was unsuccessful

R. Freshwater is as big a talmid chuchem as Reb Mordhe Duvid.

Lets give credit. Tzanz was more famous than Chabad in nigle and Chabad can't take it. Chabad marginalises anything in yiddishkeit which they are bad at. It is a classic symptom of a low self esteem.....

How could Harav Hatzadil R' Ungar Shlite grow up in Crown Heights and has close family in Chabad, but not be won over by it? It must chas vesholem be a pegam in his nefesh.

There is a classic example of Chabad hating any chassidish group who lived in Crown Heights and was so close to Moshiach/Nosi Hador and not hold Chabad above everything else in yiddishkeit? Didn't the Rebbe himself save all the yidden.

Have a look after the war if there was any other Rebbes more instrumental in saving yidden more than the Tzanzer einiklach specificlly the Bobover and Kalusenburger Rebbes. Where was the Nosi hador then?

Admitedly no one else has kept alive limud hachasidus like Lubavitch but lets keep it in perspective. yiddishkeit in Brooklyn was not saved by Chabad (elsewhere they deserve credit).

If Chabad always says "America is no different" why are chabad so different from what they were ?

Some more characteristic AHVAS YISROEL coming from a lubavitcher mind. Wow we should all learn from u chabaskers.

Apparently this shiur is not happening for whatever reason, at least according to ''bechadrei'

Guys, I am not seeing the hate in this post. A little cynacisim, but thats it. Other than the hate against the Taddik and Nasi hador Rav Shach ZTL. And even that was muted.

Thank You, Twistelton. I knew you'd see it right.

Perhaps he is coming for the hanholo, rather than for the talmidim. Wasn't there a machloykes (regarding yerusho) a while back in Ponevitz?

The she'ur is not happening. The whole thing was no more than a publicity-stunt with all kinds of rumors as to who instigated it.

In any case - a rather fascinating stunt with lots of angles re both Ponevez and Bobov. We haven't heard the latest yet about it.

They say the Brisker Rov said that a rebbe who can learn is a contradiction in terms. So someone asked him "what about the Shtrickover?" (The Shtrickover Rebbe was one of the BR's prize talmidim.) And the Rov said "azuy fil vi er ken lernen, azui fil felt em in zein rebbistive".

There may be some truth to this WRT RMD Unger - see e.g. the comment to the Matzav item.

[FWIW, I don't think in theory there's any contradiction, and there have been any number of people who have blended both worlds. I think the intention is that what a chosid is looking to get from his rebbe is not "dry" Torah, and a person who was and is focused on this to the extent necessary to become a world class TC is therefore not likely to be particularly appealing in the capacity of rebbe.

I'm not sure how much this hinders RMDU, as the Bobov chassidus of late is thought to be a bunch of Heimisher guys looking for a good place to park themselves and not anything particularly rebbish - but I could be wrong about this.]

Just for history's sake to the anon mudslinger: Read up in the Igrois of the Frierdike Rebbe and see all his letters and telegrams about saving the poylisheh gooteh Yidden!

Anon 8/19
As far as I know Sanz from the Sanzer Rov till the Klausenburg there were no big Nigle Rebbes in Sanz, Obviously its only what we see with our flesh eyes, since Emuna I have in the Ruzhiner Rebbes.

My family members every tine say that I am wasting my time here at
web, except I know I am getting familiarity everyday by reading thes good content.