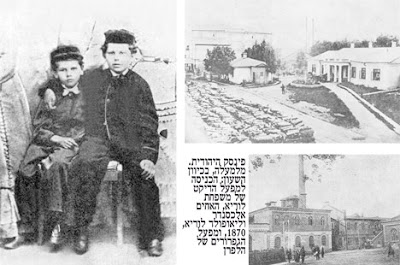 If there's anything that bothers people like me it's the fact that we think that we're the only ones left that have stayed somewhat true. We look around and it seems that the rest of the frum world has morphed into one identical bloc with the only difference a different hat or the color of socks. So, after a while, you begin to wonder: אפשר בין איך משוגע און זיי נארמאל? Maybe everything I've been taught is Takeh wrong and everybody else is right? Didn't Reb Chaim Brisker once say that אף א גלייכע וועג טרעפט מען מענטשען? So if I'd be on the Glayche Veg I'd probably find other people too, no? You see my friends, Chassidus isn't brainwashing after all, it allows one to rethink his priorities at any given time and to leave if he so pleases. Most people just choose not to. Anyway. Every once in a while you hear pisgomim and vertlach from chassidim of other Rebbes and you say to yourself "I'm not so bad after all, just look at what these guys believe and in whom they believe!"

Case in point: There's a chassidisher vort (not Chabad) that's Nogeia LeMa'yseh that goes something like this: "Besser Unzer Binyan Vi Zeyer Minyan", which loosely translated means, if you have the choice of davening in either your own shtiebel BeYechidus, or in another Chassidishe shtiebel with a minyan, daven alone in your own shtiebel. I guess the idea is that if you start wandering elsewhere, even if just for a minyan here or there, there's no telling where you'll end up. You might find that the other group is better than yours, has more Lomdim and Yerei Shomayim than yours, or (gasp!) their Rebbe is greater than yours, and that we can't afford. So they tell you that somehow the fact that you daven in your Rebbe's shtiebel makes up for the lack of a minyan, even if the Rebbe is like 6,000 miles away. Oh kayy. Sounds weird, no? Now, truthfully there are Lubavitchers who find it difficult davening elsewhere, as do I, but I push myself, even if it's not easy to do, either because I have a guilty conscience and realize that G-d wants me to hear Kaddish and Kedushah, or because of my kids.

your just lucky that you have a past that allowed you to retain a breitkeit! dont give up on it!

when I was a young fool, I used to hang out by a certian chassidus. where the Machers got very upset when they found out that I droped into the tish of a diffrent Rebbe who had come from Eretz Yisroel. Think they were scared of the compatition? Sure didn't impress me

I heard the Stoliner today said that

What a phony and fraud you are.
What's this: ''Oh kayy. Sounds weird, no? Now, truthfully there are Lubavitchers who find it difficult davening elsewhere, as do I, but I push myself, even if it's not easy to do, either ''

You a recent convert to Chabad find it difficult to daven in a non-Chabd shul?!!

Are you trying to somehow convince us of your 'Gezha' credentials?

Just as a side issue, in your typical infantile fashion you make yourself feel better, because another dumb cult/chassides preaches similar garbage?
Well known Lubab tactic:

ever heard that one anywhere but chabad?

19 years ago?
Wonderful.According to your own babbeh maysehs only a few years later to you actually join a Lubab yeshiva, so I guess you 'had to force' yourself to daven in a normal place till then, eh?
I guess when you visit your father you have to 'force' yourself to daven with him.Or maybe you don't.Which would be reminiscent of the kid back in your adopted fatherland ,Russia, who gave up his father to the N.K.V.D in service of his REAL FATHER STALIN!
Since you have discovered your real tatteh the Rebbe, you can no longer daven with regular Jews!Wow.Intresting how the Lubab preach their love for every jew!(oh there are a couple of caveats:You have to be non religous, or you have to mekabel malchus of the Nosi Hadeyr).

To read your phoniness is to want to brech.

Reminds me of a shaliach, whom I heard say:" Better not to daven at all,before davening with the poilishe..."

This is maybe true in the US but here in Erezt Yisroel we (Chabadskers) have no problem davening in other minyanim for a variety of reasons. So not OK to make this kind of generalizations.

Two things I do not understand...one you switched groups...did you ever daven in Chabad before you converted...

You said alone in your own shteibel...that stil means in shul... sHTAYT IN shulcan aruch that it is better to daven b'yechidus in a shul without a minyan than at home which is why many shluchim who live in Yehoopits without a minyan possible... go to their Chabad house to daven and not in their home when the two are not the same...
Where are you getting that it means you should not shlep to the end of the block to daven with the Snags and instead daven at home...
or do you walk to the Chabadsker shule farr their davening?

In Stolin the Rebbe believes that if you daven in a different shul, then you definitly didnt daven with the unique loud Stoliner nusach so it is as you didnt daven

LOL you daven like a Karliner anywhere but Karlin they pprobbaly would throw you out.

Mitzvo goyreres mitzvo: first you send your kids to a non-chabad camp, then they expect their father to daven with a minyan, etc.

"This is maybe true in the US but here in Erezt Yisroel we (Chabadskers) have no problem davening in other minyanim for a variety of reasons. So not OK to make this kind of generalizations."

For convenience reasons or ??
Why not??

I believe R. Wein mentions on one of his tapes that in the old days Chassidim and Misnagdim didn't daven in each others houses of worship (I believe what is meant here is for a period of time even after the charomim basically died down). But for one Chassidic group not to daven by another nowadays, interesting.

"Are you trying to somehow convince us of your 'Gezha' credentials?"

is this yichus like a frged passport or an Orwellian speak?
Its either that or money$!