I sit here in the office, doing what needs to be done - working for pittance to help support the family. This is a discussion onto itself - why college educated men don't make much more than young girls who do their nails while waiting for the phone to ring.... There should be a rule about that. Maybe Barry O could help us out here... Anyway, I sit here and work. It's hard enough working when you know that it's all gone way before the check's been written. But this is why we're here, to work and have nothing to show for it, so we do as we need to. But even the pain and suffering should have limits placed on them, no? There needs to be some accounting of the pain and suffering, no? So why then am I subjected to such utter, indescribable pain? what have I done to deserve this? Even the perpetrators of the most brutal crimes aren't subjected to such pain and suffering. They have lawyers and rights groups that advocate for them. They do, but I don't. They get to work out and entertain themselves, and we don't. C'est la vie. 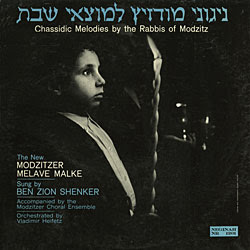 What - you ask - is the pain and suffering that I'd made to endure? It's simple. Regesh Symphony - or is Regesh classics? - over and over again. That's what the man in charge of this office insists on playing over and over again. That and some classical music CD. Not that listening to any other tape over and over again would have a different effect, but it so happens that Regesh is the tape that right now has me tied up in knots. Me being somewhat musical maybe I do have a beef specifically with the folks at Regesh, like we discussed back in '07. Not that I have better music or a better voice than Reb Abish, it's just that if you ask some Yeshivishe types there was no Jewish music until the 1980s. Yes, they all listened and kvelled over Carlebach, but they may not admit it. Abish made it ok to listen to Jewish music, since it had an overtly Yeshivishe kvetch to it, something the Roshei Yeshivah at Lakewood could "Far'Dveyke zich" to. There was no Bentzion Shenker for these people - and I pity them for it. Ignorance is bliss for these folks, and what they don't know can't hurt them, - or can it? Of course it can. Abish is nice, but to go through life thinking that AB invented Jewish music is nothing short of a crime. 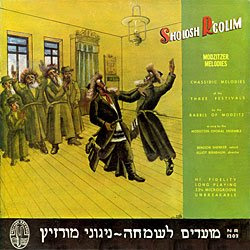 Maybe I should start a BZS fan club. Start promoting him among the Yeshivaleit. Start showing them what real compositions and real singing can be like. Let them not go through life without recognizing the man and his achievements. Although Chabad Nigunim in my opinion have no match on earth, Modzitz - especially when sung by RBZS in his prime is not far behind, although some may say that after hearing the nigunim from RBZS, singing it at a shabbos table or hearing it from any other is just no good. Ahh, but how? how do you convince a youngster who gets his musical kicks from the shnook of the day playing incoherent garbage to appreciate the good stuff? The Yeshivishe/Modern/Lubavitcher kid doesn't know that the Eishes Chayil, Menuchoh VeSimchoh, Baruch Keyl Elyon as well as many others were all either composed by him or made famous by his melodious voice. The Chossid who never misses a Melava Malka may go through life without knowing that the Omar Hashem LeYaakov and Askinu Seudoso that he sings every week is a Modzitzer shtikkel that our BZS made famous.

What can I say? It hurts. Start Listening Now.

Ipods are your friends.

Better yet, if you have internet connection at work all you need is a set of earphones and viola! you are free to listen to anything from Niggunim to classic rock...

at my current job listening to an Ipod is not an option. Besides, shmaisradio is nice, but not if there's another tape banging away.

Noise canceling ear/headphones are a charm.

Do you want a solution or do you want to [melodramatically, if i may add] complain.

Amazing link Groise Shkoach!!!
Where do you find these things I want in?

Great point. But...you're uninformed. Abish is so out. The new baalei hergesh are into the neo-Carlebach, particularly Yehuda Green.
Shmuel Brazils sons are unique, I dont know if Abish does justice.

maybe he's out with the youngsters. I'm dealing with older people. They never caught on to Green.

Shuli Rand is a good actor, why he started singing is beyond me. The others may have good voices, but it's not Jewish music, if you know what I mean.

I love Rabbi Brazil's music. But I am glad I don't have to read another article posing as an article about Abish's stance on music when its really about his son in law's real estate company (his son in law is/was matzliach, is a nice chassidisher yungerman and has a good heart, but seriously, that Mishpacha article was so obvious).

Are people aware that the Modzitzer Rebbe Shlito, a prolific composer in his own right, is in Flatbush for Shabbos???

you're right, although the quality there is bad.

Sorry Tzig, no musicologist would agree with you. It is the other was around. Chabad does not hold a candle to Modzits. Chabad has mood but is nowhere near the brilliance in structure of a Modzitzer niggun.

YOU'RE ENTITLED TO YOUR OPINION, BARUCH.

R Ben Zion has composed world famous classics like no other composer has. He has a whole slew of Nigunim that everyone knows but have no idea that he composed.

Tzig, it is not just my opinion, but all those who know thier music.

BZS Admirer, I believe the reason why many do not realize that they are singing a BZS composition is that he is extremely versatile. Unlike Carlbach, BZS’s compositions are diverse in style and more sophisticated (not just AABB) so they not always recognizable. That is true genius. I would add that BZS has niggunim that are similar in style to Carlbach but are more complex and more original.

My mother had a heart of ice, but Shenker always managed to melt it.

You can't explain colors or illuminating lights to a blind person, and neither can you explain to a kalte litvak the sixth sense of a Niggun. They are all deaf, and the only song they master is the chant of Eli Tzion. Lots of you wonder how the Besht overpowered these grizzly bear Litvaks, the answer is simple: with his humming and drumming he trashed all their piled up Lomdus of impossible possibilities. And until today these Litvaks can't grasp it. A real chasid does not quarrel, neither does he debate nor philosophize; he closes his eyes and starts vocalizing some bim-boms and some oy yos, and, boo... The rest is history.

Just this week I participated, by accident, at a Litvishe wedding. What a killer! No rhythm, no texture and certainly zero flavor. The Yeshiveleit amuse the Choson with yoga style exercise, and all the Rosheshive's eulogies with “Ashrei me she'amolay Batairoh” . They all have that same dirty look, like some have while reciting the Book of Lamentations. Perhaps they throw in a Chassidishe Niggun, but they slaughter the song with a dairy knife, what a Tzaar Baalie Chaim! The punch line is that the wedding was a Mehuderdige Zecher Lachurban.

Did you ever watch them Shtieging in the Elul season, where between the Briske Tzvei Dinim they cantabile Shmuel Brazil’s B’ain Meilitz Yosher, Oy Vay, how don’t Rava and Abeiye flip out from the Vilna Shas after non-stop listening to those miserable melodies ?

I could go on and on, but who wants to start with a Misnaged?

Thank you for directing us to this wonderful site.

and see if you can spot the atrocious mistranslation of one of the song titles.

Abarbanel,
As usual, you brought warmth to my heart and a smile to my face.

I'm thrilled with the accidental wedding you attended, who in the world would illustrate so well a Litvishe wedding.

BTW
I cherish your style of writing,and have a good lough each time reading your posts, but still, your Yiddish ones beats them all. No one these days possesses such rich Yiddish talent.

Z,
K'ayil taarog, Do not Murder??? Is this the error you speak of?

>K'ayil taarog, Do not Murder??? Is this the error you speak of?

http://www.mostlymusic.com/modzitz-shabbos-modzitz-melaveh-malka-p-2922.html
If you click on the second song Veyiten Lanu you will hear a very popular tune currently sung to the words "Hinei Kel Yishuati" popularized by Soulfarm and Moshav. I have to assume that Reb Shlomo must have sung it too. Did Ben Zion Shenker write the tune?

http://faujsa.fau.edu is a remarkable archive.

If you need help with downloading music from there, I can show how to do it.

help? I have no idea how to download from there. Help me out! Please

i dont think tht abish brod is good music at all