I promise. No more Biur/Mendelssohm talk after this for a while. Bli Neyder, anyway. I believe it was Yehupitz who used the Yeshivah lunch schedule analogy to prove a point about the Biur and whether or not Mendelssohn was considered a legitimate Meforash in di Litteh. It was brought to our attention that the Tzemach Tzedek of Lubavitch, the Posek HaDor, was listed as one of the "maskimim" to the Biur, and we all know that couldn't be and never happened. 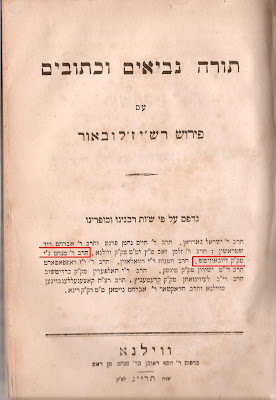 So the only Chassidic greats they could think of in the whole Russian Empire were the Tzemach Tzedek and the Barditchever Rov Halperin? What did they base this on, whomever Dr. Lilienthal went and visited? 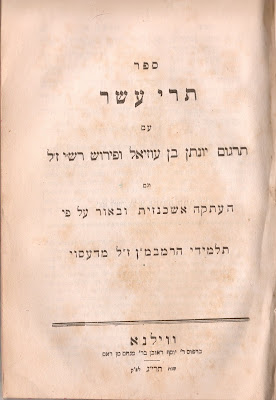 Shaar Blat of Trei Osor, with the flip side of that shaar the next photo, showing that the Government "convinced" them to print it. 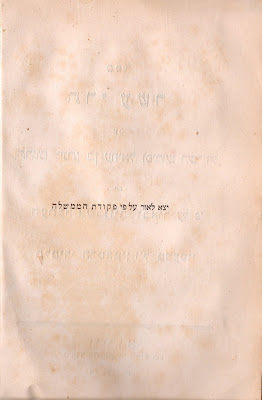 So the Memsholoh told the Rom Family to print the Biur. They also decided that the Tzemach Tzedek endorsed it. I guess we can derive from that, that the fact that the "official schedule" made extensive mention of the Biur could very well be only to please the authorities. I'll accept that. I also think that bichlal too much time is listed there as having been spent on TaNaCH. I doubt they did that much Bible in Volozhin.
Posted by Hirshel Tzig - הירשל ציג at 8:36 PM

What a sorry apology. Be a man. Say "I'm sorry, I was wrong. You were right. I won't be so smug and self-satisfied in the future."
And by the way, it's so convenient how all of a sudden it can't be true. Why not? maybe both Volozhin AND Chabad aren't as pure as people would like us to believe. Ahhh, because you drink cool-aid, that's why. Go bury your head in shame for being so transparent.

tzig i love how you analyze history. Where do yoi get all these old mismachim from?

With pleasure, when are you free?

to quote the Machanayim books:

I guess only everybody else is an idiot, not you, huh? you don't "read"

listen, genius: if I say I was wrong one day Artscroll/FH will write books about me saying what an "Ish Emes" I was...

I still think that the curriculum in Stempers book is the real stuff, it was not from the governments coerced list. In misnagdic non chasidic they did not look at the biur as a threat to yiddishkiet as chasidim.This Rambam has no relationship to the Tzemach Tzedek it was the government using his name, he had one option to take out a full page ad in St, Petersburg Times to deny it, and get beheaded the other day.

Rabbi Sholom Ber Levin of Aguch library told me years ago that he too wondered how the Tz"Tz's name got on the sha'ar blat if he was so against abridged seforim, & he too surmised, like Tzig, that it was done without the Tz"Tz's haskomoh.

More research on this is needed.

ZIY
What "abridged seforim" are you talking about?

Anyway, I"m not sure why the Goverment would be interested in promoting the "Biur".

I also don't know what they mean by "Bifkudas Hamemsholoh".With the Goverments ;permission?Maybe that's what it means.

The Biur was studied and accepted in many places so I would not be surprised that the Biur was actually taught in Volozhin and maybe the Tzemach Zedek himself used it.It's not at all far fetched.There is documentation of one of the big talmidim ofChasam Sofer using it (Maharam Schik iirc)

"The Biur was only a commentary on Chumesh based on Rishonim in a fine German, The Tzemach Tzedek was a boki bar none."


Great people used the Biur.A boki does not mean that have no use for a commentary.Your own rebbe used many likkut seforim such as the Talmudical Encyclopedia and Sdei Chemed

he would have no use for a Likut that brings him down the Ramban and the Saforni that are on the page,

For the sake of the truth - Halperin was not rav in Berdichev and was not a rav at all, he was a chasidishe baalaboys in Berdichev who was active in Jewish public life.
Note that none of the men listed were Community rabbis not Levinson not Halperin.
The Lubavitcher rebbe was the yotze dofan.

Hey give credit where credit is due.

Tzig,
You embarrass yourself (and your last 20 good posts) with this garbage. Do you remember the scene from a few good men (frummies cover your eyes) where Tom Cruise asks the soldier to show him in the book where the dining room is to prove that not everything is in the book? That is what this is like. I would like to see the next page where the menu of the meals was shown. I am sure it shows foods from all the food groups and in the amounts recommended by the Russian version of the USDA. C'mon this is a joke. This is like a press release.

"he would have no use for a Likut that brings him down the Ramban and the Saforni that are on the page,"

Apparently you know nothing about the Biur.That's not a problem, but talkiing like you do know is

Anon
Can you stop being a talker out of thin air, and give us a synopsis on the Biur, Can you take this weeks parsha and give a original chidush of the Biur, that enticed people in the caliber of the Tzemach Tzedek to look in to it. Besides have you followed the Tzemach Tzedeks Oir Hatorah series?

>So the Memsholoh told the Rom Family to print the Biur.

That was probably more or less how it went down, but the Romm family printed almost all the Haskalah books in Russia, so I doubt it took much persuading.

>I still think that the curriculum in Stempers book is the real stuff, it was not from the governments coerced list.

The problem is that yeshivos today, and certainly yeshivos then, didn't really have a "curriculum" that you can jot down in a list. Hey, when I was in yeshiva one "semester" I "took" "Jewish Ethical Literature." So it's almost certainly cooked up.

>In misnagdic non chasidic they did not look at the biur as a threat to yiddishkiet as chasidim.

This is more or less true, but that doesn't make the schedule authentic.

>Anyway, I"m not sure why the Goverment would be interested in promoting the "Biur".

Because it promoted the enlightenment/ education/ eventual Russification of the Jews.

To use a current analogy, what would happen if in a Satmar cheder instead of teaching whatever it is they teach and in Yiddish, they'd decide to instead teach Chimish with Martin Lockshin's annotated English translation of the Rashbam. It's nothing but the Rashbam, and its only English. Even if you say, well, his footnotes refer to articles in JBL or whatever - fine, black those out. All you have is Rashbam and in English. Do you really think that cheder Yinglach being taugh Chimish with Rashbam in English are going to grow up to be the same Satmar chassidim? Not even close.

As for the contention that the Biur is just a likut, that's nonsense. There are many original explanations, and there is a reason why it was and is taken very seriously as a perush, putting aside politics and metaphysics. It was written by people who knew Tanach, knew meforshim, knew Hebrew, knew didkuk, knew Chazal and knew the issues which Tanach commentary is concerned with.

Is Rashi a likut? Please.

Hirshel,
the people listed, including R'Yitzele Volozhner,particiipated inn the 1843 cnference in peterburg. as part of the outcome, the had to agree to have their names on this book.