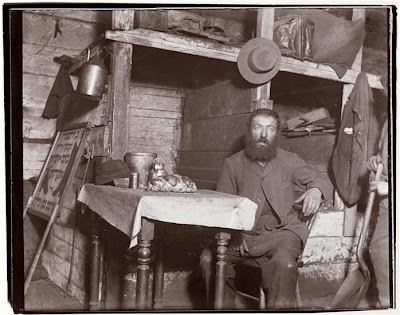 Think of this while you do your Erev Shabbos shopping:

This Yiddele probably came from somewhere in Russia/Poland/Lita to "di goldene medineh" to make a living. He may have escaped pogroms with his family, or maybe his family wasn't as lucky as him, because they were home at the time and bore the brunt of some Czarist-induced mob. In any case he's here in New York all by himself. He finally found a job sweeping coal, or something along those lines, and hence the complexion of his face. (And you thought that was only a job for an Orel...) And where do you think he lived? In that cellar. That's right, you're looking at his Shabbos table there. Tasty looking Challah, eh? The caption to that photo Reads Like That. See For Yourselves. So if you browse the aisles in your local supermarket and see lots of goodies, and maybe you needn't really stretch your grocery budget to the brink like that, think about Yiddel in America a hundred and twenty years ago. Think about the look on that forlorn face and put that Schick's cake back in the shelf. Your wallet and your waistline can both do without.

Why is this American Jew special or inspirational? I'd be more impressed of pictures of the ones who did much more and went to Palestine instead to reclaim our country and had to defend themselves.

Isaac: He is inspirational because despite his poverty, he is keeping yiddishkeit in very tough conditions. He is not sitting with a full stomach motzai shabbos and shooting from the hip. He is doing what hashem wants with simplicity and with no agenda.

rome (ch) is burning and your busy with drivel?!

Anonymous: I'd be far more inspired by the ones who did all that AND defended their people in Palestine, from the same era, and undoubtedly facing even bigger hardship.

Don't misconstrue me as not being impressed by people in the goldene medina who kept floating despite adversity, but I'm giving my personal view of what impresses me even more.

Look at the pictures of people from Kibbutz Chafetz Chaim for instance. Now, those people inspire me no end. Why did Poalei Agudas Yisrael fold? THEY, in my view were and are the authentic Jews. They were moderate, frum, learned heaps AND worked for a living and built up a Jewish State.

Why do you think that it's erev shabbos in the link that you gave it says "sabbath eve"?

Isaac: what classic zionist drivel. Reclaim from whom? From others which has caused a vicious circle of them killing us and us killing them? And if not for the Jews who settled in the US and their influence on US policy and their contribution to the Palestine cause how far would those who went to Palestine have got?

For many of us the most recent bread our ancestors(parents and grandparents ) had was Auschwitz bread and birkenau soup
Mmmm Mmmm good ! it sure makes that Lower east side bread taste good...

Anonymous your use of the term drivel indicates you are Australian. Unfortunately, you won't succeed in baiting me into some Satmeresque discussion of Zionism. Go back to your goulash.

I do not understand why Auschwitz or the Medina come up here. Is everyone on this blog engaged in some sick contest of oneupmanship? The guy in the photo is inspiring because he is mistapek bemuat and keeping the mitzvoth. No one was comparing him to Oshry, the Aish Kodesh or Ben Gurion. It is just nice on its own.
Why dont you tell Masbia to go build Palestine or Tomchei Shabbos to feed the children in the Lodz Ghetto? Because that is about the logic you are using if everything not Shoah or tekuma related is suddenly worthless.

next time i'll be shopping at Pomegranate' i'll remmember this yidel.
thanks Zigelle

browzer said it for me.

Don't forget, this was at a time when his boss, most likely a Jew himself, would often say "az ihr kumt nisht ahn Shabbos er kumt tzu mir nisht ahn Zuntag". The mesiras nefesh illustrated in this picture is simply breathtaking.

I also find the photo inspiring and illuminating. I also don't see what in the world this has to do with what the people in Petach Tikva were doing at the time.

I suspect that the photo is posed. Why would the table be set for Shabbos while he's in work clothes? And even if he's too impoverished for a change of clothes, why is he letting a photographer work when he's ready for Shabbos? And why is someone holding a shovel in the background?

You're right. It's posed. He just took off his tux and cylinder.

The point I was making in this century of Nazi extermination camps against Jews and Soviet terror against Judaism and all their abizerayas (Communism in Rumania and Hungary from 1945-1 990) , seating in the Lower east side like this teyere Yid is not all that significant.
He had hope in this new goldene medinah and most probably his son was a school teacher , grandson a top notch surgeon and great grandson is no longer Jewish...

Erno: This picture has nothing to do with Auschwitz or the Gulag. Its just a picture of a Jew who thinks Judaism is precious and worth holding onto. Even if his hard work did pay off, he had no way to know it would. No matter how you rephrase your point, it remains completely irrelevant. We do not need to return to the same neurotic compulsions to discuss an image.

What's wrong with you people?

At least one of you hasn't completely lost his mind. Stop injecting your obsessions about the yishuv or the holocaust into everything.

Your comment about Schick's cake is - in the context - a true pinnacle of kleinkepigkeit. Are you able to see it ?

how's the family, everybody OK?