I apologize in advance if some people get into a moroh shchoyreh funk when we discuss the Holocaust and deceased grandprents and such, ober s'doch a b'feyrushen posuk of Zchor Yemos Olam. And even more so, stories like the one featured here, a reprint from last Elul's HaMevaser newspaper published in Eretz Yisroel, teach us how to deal with adversity and tragedy. Many of you may have watched the Levaya of the couple Holtzberg Hy"d in Kfar Chabad, where lots of people had "kashes affen eyberhstun," and you may have been shocked, surprised, uncomfortable or all of the above. You had never, ever heard such talk before. Everytime you heard about a tragedy the people involved, no matter how simple or unlearned, always spoke so trustfully, and accepted their lot with love, because that was the will of Hashem. Frankly, either people are complete Tzaddikim - and Hashem only punished the righteous because they can handle it - or they don't associate tragedy with G-d, meaning they don't see it as the hand of Hashem , or they just don't care. If tragedies only happen to Tzaddikim and their families then I accept your complaints, and maybe that's why we see others saying it, not the actual people affected by it, like maspidim and commenters on websites. There's no other explanation. Pain like that NEEDS to be accompanied by crying out and asking "WHY?" And until now, if you were raised on the Hamodia,Yated, the JO, Feldheim and Artscroll you thought that any other way was heresy, but now you now better, because the Tzig showed you a befeyrushen mayseh rav of the Ponovizher Rov, zt"l. The true Rachmonus is af unz, down in the ditches on this lowly world. Yet the Ponovizher Rov built Torah and fed yesomim, despite his pain and suffering, which only makes it more amazing, seeing what emotions he had inside of him. 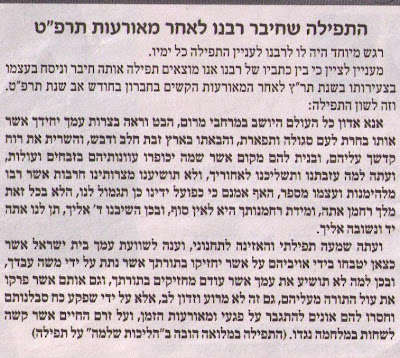 As a bonus, we present Reb Shlomo Zalman's tefilloh composed after the massacres at Hebron, 5689

Aren't you confusing Holzberg and the "rosh" from LA?

this Tefila of the RSZ Auerbach smells of his early mentor Rav Kook, especial the part of the prayer for the Chilonim. His son reb Shmuel would never create a Tefila like that.
Also he is asking hashem too many times. Lomo (Why) its illegal in todays climate, we are much more sophisticated today in Emuna Vedies. We have already Ramban in a artscroll version, every Sem girl can preach already on emuna
Oi No Loni Ki ....

Thank you for the moving story. Nebech in those days one had to get drunk to be allowed to cry.

Tzig you have to tgake a nice motzei shabbos and make me cry?Great Great post!And to the first commenter they didnt need to be drunk to allow themselves too cry,but the holy survivors wanted to live a life and not live in the past and die from depression so they didnt allow themselves to cry a whole year.

chosidlite, a sheine sentimental pshat and if only it was so. True they looked forward but it was for more reasons than one. My father zol zein gezint was there and to this day he can tell us stories but as soon as I try to engage him emotionally he finds it difficult and it becomes awkward.

He told me that in the post-war yeshive he went to which was full of krigs keshlogene it was a non-topic. Di herst: tens of orphaned bochurim without kith or kin in men hot nisht gekent redn. One needs only recall the outpouring after the release Schindler's List to realise how difficult it was before that. In Israel of course there were other tzionistishe cheshboines as well.

Anonymous: on what basis do you call Rav Kook his "EARLY" mentor. Is it because Rav Kook passed away or are you implying that RSZA moved away from R' Kook. The latter is false, as you know. The former is mischievous because it implies he had a later mentor who surpassed R' Kook.

Furthermore, the alleged attitude of his son is completely irrelevant here.

You have thrown in two herrings but they both stink.

isaac, if you would drink vodka instead of bourbon, you would realize, herring smells great.

Issac,
Did you see him quote Rav Kook in his later years,outside of the Meorie Oir Haskama and his defense for the Heter Mechira in his early years, you don"t see any place where he relates to Rav Kook,
Adereba, I would like to be wrong.

Anonymous: I didn't say my herring stank. I said the two herrings thrown in stink. Oh, and I hate bourbon.

Anonymous: Try finding out about the attempts to remove the haskomo from his shmitta sefer and what he said about that. Unless my memory is failing, there is also stuff in V'aleyhu Lo Yibol.